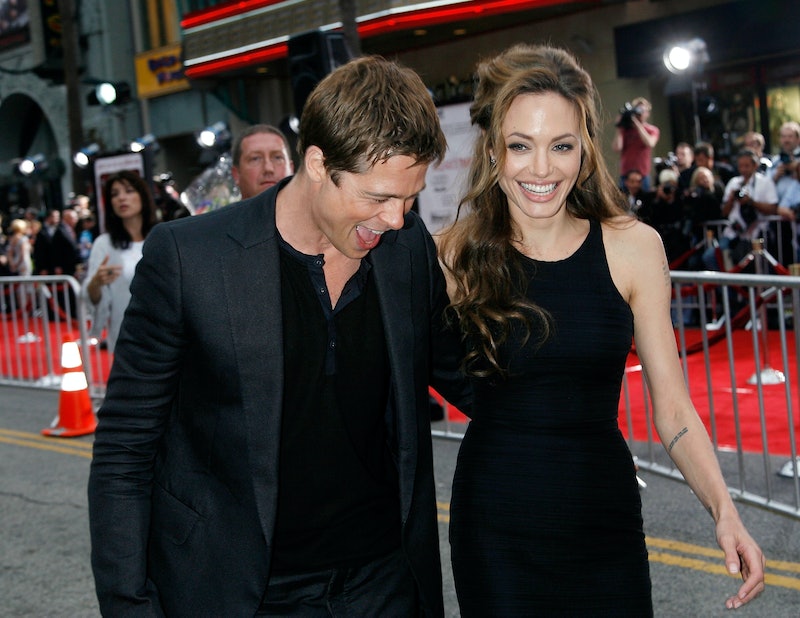 Well, it finally happened. After being together for nine years and engaged for two, Angelina Jolie and Brad Pitt tied the knot at Château Miraval in Correns, France last weekend. The two had long said that they wouldn’t get hitched until gays could legally marry in every state in U.S., but two years ago, Pitt changed his tune: “We made this declaration some time ago that we weren’t going to do it till everyone can. But I don’t think we’ll be able to hold out.” He added that it was their six kids who were really pushing for it.

The nondenominational civil ceremony was performed by a California judge, and was attended by friends and family this past Saturday, their rep confirmed Thursday. It seems that pretty much the entire world is happy for these two. But what made them finally take the step? Why now?

After all, the two were pretty much the poster children for a committed relationship without the conventions of marriage. Since they first got together in 2005, the media has pushed the question of marriage on these two like a gaggle of Jewish mothers. But time after time, they had a perfect reason as to why they didn't see the point in getting married.

Although everyone was kind enough to congratulate me on social media, behind the scenes, friends exclaimed “You’re kidding, right?” and “Who are you right now? I feel like I don’t even know you.”

There was the fact that they both had been married before and knew from experience that, "it's not a contract or the ceremony that makes you feel solid." There was also the kid factor. As Jolie explained in 2006, they were genuinely "committed to the children and as parents together," adding, "to have a ceremony on top of it is nothing.” It's funny how things change.

When I heard the news alert about their marriage this morning, I rolled over, grabbed my phone, and logged on to Twitter. "Breaking news," some respectable publications called it, but it didn't seem like breaking news to me. Honestly, it was bound to happen.

I should know. I, too, always said I’d never get married. I didn’t believe in it. For me, it seemed like an outdated tradition, and similarly to Pitt and Jolie, I didn’t think it was fair that I could marry while my gay friends could not.

But last year, two months after I attended my friends David and Jerry’s wedding in the Berkshires, I too found myself engaged. I felt like a sellout.

I had met Olivier; a man who I strongly felt, for the first time in my life, I could be with forever. That part was certain. The only problem was, if I wanted the "forever" part to happen, I knew it made sense for us to get married. Since he's French and I’m a New Yorker, it was clear that making our relationship legally-binding would make our being together that much easier.

But I had my reservations. By getting engaged, I was essentially turning my back on everything I’d been spouting since I was old enough to have an opinion on marriage. Even after I met Olivier, and people knew it was serious, I was still standing my ground on the subject: No way, no how. Marriage was something other people did; something my sister, who owns a house with a white picket fence and gets a brand new Volvo SUV every two years, did; it’s not something I do.

I live alone and like it. I travel the world solo and love it. I go to restaurants by myself and don’t have an emotional breakdown because I’m — GASP! — single. I was not the marrying kind. Or so I thought.

And so, of course, when I announced on Facebook that I was engaged, I fully expected not to be taken seriously by my friends. And I wasn’t. “Is this a joke?” was the first message I got.

Although everyone was kind enough to congratulate me on social media, behind the scenes, friends exclaimed “You’re kidding, right?” and “Who are you right now? I feel like I don’t even know you.” I didn’t know how to respond. I didn’t really recognize myself either, considering the decision I had just made. I had become like all the rest. I wasn’t exactly proud of myself, but at the same time, I just wanted to be with Olivier, and that outweighed the rest of it.

I had finally found a man who was willing to put up with me and all my neuroses, hang-ups, and persistent misanthropy. I mean, we’re talking about a guy who scoured the streets of Paris for two hours just looking for an iced coffee and the New York Times for me. (If you’ve ever been to France, you know that finding an iced coffee isn’t easy! They drink hot coffee in July! Why, I don't know.) In my humble opinion, that’s a man worth marrying.

In the case of Angie and Brad, I would guess that it also just began to make sense to them. They’ve been together for almost a decade, they have six kids between them, and from the looks of it, they’re very, very much in love.

The thing about love is that it can make people change their minds. There was Olivier on his knee in that tiny apartment, asking me to marry him. We'd been up all night talking, drinking wine, and the sun was coming up. Despite having not slept, I wasn't exhausted. I was so high from being so in love with him that when he popped the question, a question I never thought I'd hear, I said what I honestly felt: "Yes."

What can I say? I changed my mind.

More like this
Brad Pitt’s Recent Dating History Includes A German Model
By Brad Witter
What Is Brad Pitt’s Net Worth? The Bullet Train Star Now Makes 8 Figures Per Film
By Hugh McIntyre
What Is The Forest Personality Test? The TikTok Trend, Explained
By Georgina Lawton
Christina Aguilera Took A Powerful Stand At Brighton Pride
By Sam Ramsden
Get Even More From Bustle — Sign Up For The Newsletter