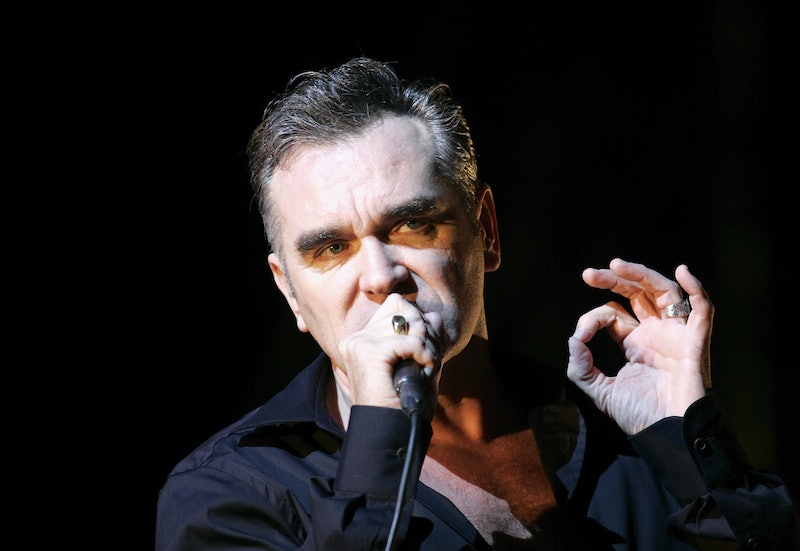 TCC is essentially the Tumblr incarnation of how we all feel every Monday, blending bummer prose with stark black lines and wistful characters. It sees Charlie Brown standing alone in a field, muttering British pop gospel like, "Love is just a miserable lie." Another vignette features Charlie whispering in Lucy's ear a solo Morrissey song title, "If you don't like me, don't look at me", which, ya know, #preach.

It's true that although Schulz's infamous Peanuts is likely one of the most popular comic strips in existence, it was never actually funny. It valued more of an emo honesty over hearty LOLs. Seriously, it's kinda crazy this union didn't happen before. We're not the only ones stoked by the birth of LoPrete's TCC. According to a Morrissey zine, Moz himself approves. It says: "Morrissey is delighted and flattered by the Peanuts comic strip with its use of Morrissey-Smiths lyrics, and he hopes that the strips remain." Same here.

I never realized before just how precisely the Peanuts gang embody Manchester-bred good grief. Consider Lucy's bluntness, Linus's snobbery, and Charlie Brown's omnipresent dark cloud following him around. Schulz pretty much drew various dimensions of Morrissey's persona in the form of iconic children. This Charming Charlie was basically written in the stars.

More like this
Harry Styles Performed A Snippet Of Taylor Swift’s “22” & The Crowd Went Wild
By Jake Viswanath
10 Eurovision Moments That Celebrate The Weird & Wonderful Camp Extravaganza
By Sam Ramsden
TikTok Is Using A Kendrick Lamar Song To Post Thirst Traps
By Courtney Young
Remember These Ancient Pieces Of '90s Tech?
By Lucia Peters and Emma Carey
Get Even More From Bustle — Sign Up For The Newsletter