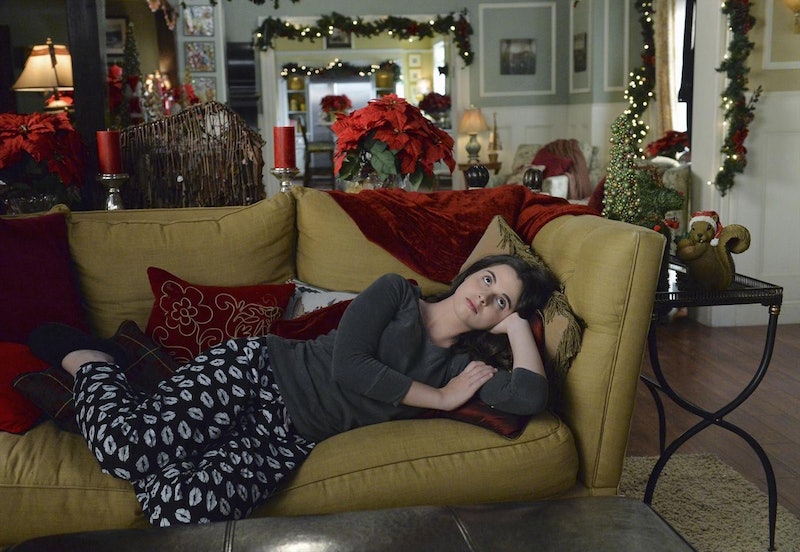 Are you ready to get back into the Kennish-Vasquez family? Season 4 of Switched At Birth premiere, "And It Cannot Be Changed" airs Jan. 6 on ABC Family. Though, don't worry, if you are caught off guard (like myself), catching up with SaB on demand is as easy as pie. What a title, too. What could it mean?

According to the official ABC Family press release:

...the family and Emmett discover Bay's impulsive decision to take the blame for Daphne, and no one is happy about it. Meanwhile, Daphne is determined to prove herself worthy of her switchster's sacrifice while also dealing with the challenges of starting college.

If you remember from the end of last season, (the summer finale, not the Freaky Friday Christmas special), Bay and Daphne have graduated High School and Daphne's prints were found at the construction site that she trashed. When Daphne went to turn herself in, Bay decided on the fly to take the fall and become an edgier artist by serving jail time for destruction of property that she didn't actually commit. Because that makes sense. Ladies, I know you were switched at birth, but you're not identical twins. These wacky switcheroos don't work as well as you think they do.

As for the title of the premiere where this all falls apart, "And It Cannot Be Changed," what could that mean? I've seen court shows before. Almost anything can be changed. What are they trying to say?

In the promo for the episode, we see Bay getting arrested! Yikes! Lucas Grabeel is angry, Emmett is riding away on a motocycle and Bay calls something "the right decision." Then, later, she's pushing Daphne away. Everyone's pissed at either Bay or Daphne for pulling this stunt. I have to disagree with the switchsters here. They need to catch up on Orange Is The New Black — jail is not summer camp.

Maybe the title here is referring to how Bay can't take back her confession. Or, how Daphne can't change what she's done. Both girls have made some pretty foolish choices. They can try to repair the damage, but they can't alter the past.

Did you know you were taking an Art History course by switching on ABC Family? All Switched At Birth episode titles share their names with famous pieces of art."And It Cannot Be Changed" is one translation of the title of this painting by Francisco Goya. It shows prisoners being executed, with some sacrificial imagery as well. It is also called "And There's Nothing To Be Done" or "And It Cannot Be Helped." The show likely chose a translation that best fits the episode description. To change is quite different than to help. Francisco Goya was a revolutionary painter, particularly thanks to his realistic depictions of war. The painting in question is part of the "Disasters of War" series that has inspired many artists, including Ernest Hemingway.

This does make a lot of sense for the episode and the series, considering Bay is an artist. Goya's subject matter and dark history must represent the phase that Bay thinks going to go through by doing time in Kansas. Good grief.