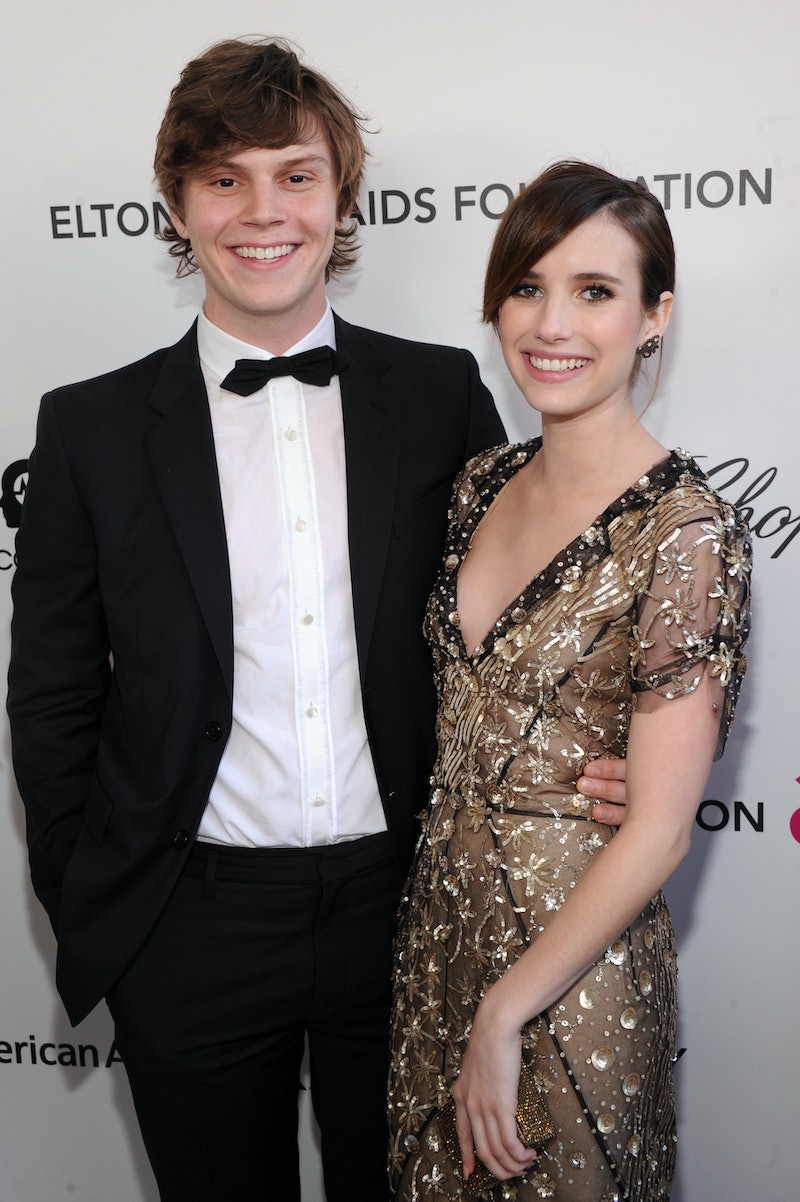 Inquiring minds must have more information about this affair that seems to vacillate between passion and acrimony. First they liked each other, but thought the other one was totally apathetic. Then, they were hopelessly in love, and frolicked down the craft services tables on the American Horror Story set holding hands and making out. Then, they were calling the cops on one another for domestic disputes, and now they're engaged. Ay caramba!! HOW do we keep track of all of this? I’m already getting whiplash from the manic ping-pong match of their love.

It’s time we sat down and took inventory of this torrid affair, because I can’t afford another trip to the chiropractor. In order to make some sense out of their saga, let's look back at the history of Emma Roberts' and Evan Peters' love.

Peters and Roberts meet while filming the indie comedy Adult World. Shortly before, Roberts was involved with Chord Overstreet and Peters was dating Alexia Quinn. However, thoughts of Chord apparently dissipated when Roberts met Peters. The actress recounted to Chelsea Handler on Chelsea Lately in 2013 that she was interested in her fiancé from the beginning, and immediately thought "we're totally gonna date." However, Peters "literally didn't speak to [her] the entire movie. [She] thought it was so weird."

According to the New York Daily News, this is when Adult World wrapped and the pair began officially dating. Despite what Roberts told Handler, Peters said that he and Roberts "both really liked each other so it was a little difficult to work" on the set of the film. Hm, OK. That's not really what Roberts thought, but sure!

Roberts joins the cast of American Horror Story: Coven, the series that Peters has been on since 2011. Lovers become co-workers.

Roberts is arrested for an instance of alleged domestic violence against Peters. As TMZ reports, Peters was allegedly found with a bloody nose and a bite mark, after the two had an altercation. However, he decided not to press charges.

THEY'RE FINE, GUYS!! The Daily Mail reported that the pair was seen being lovey-dovey on the set of AHS: Coven in New Orleans. Nothing to worry about here, folks.

As People reports, Peters proposed to Roberts during a holiday trip to London. Later on in the month, Roberts dished to Chelsea Handler about how she and Peters began dating. After mentioning that she didn't really think he liked her very much at first, she remembers the tides turning: "He texted me, and then we got together."

Peters and Roberts are spotted out at a cocktail party in the wee hours of the morning one night, and Roberts appears to be disgruntled and crying on Peters' shoulder. Plenty of celeb news outlets claimed this as a "trouble in paradise" moment, but it looks to me like an instance of Roberts getting a smidge tired and cranky. We've all been there.

A source told OK! Magazine that the couple's mercurial relationship was driving their AHS: Freak Show co-stars bonkers. “Basically, as soon as the director yells, 'Cut,' Emma and Evan are making out,” the insider said. “That is, if they’re not screaming at each other.”

Peters and Roberts remain engaged. We're not sure when they're planning to get married, but if you're taking bets, my money is on the not too distant future.

More like this
Rita Ora Finally Opened Up About Marrying Taika Waititi & Their "Perfect" Wedding
By Sophie McEvoy and Catharina Cheung
Hilary Duff's Husband Matthew Koma Has Her Name Tattooed On His Butt
By Jake Viswanath and Stephanie Downs
Gemma Atkinson & Gorka Márquez Are Strictly The Sweetest Couple
By El Hunt
John Corbett's Wife Bo Derek Once Revealed If She's Team Aidan Or Team Big
By Alyssa Lapid
Get Even More From Bustle — Sign Up For The Newsletter
From hair trends to relationship advice, our daily newsletter has everything you need to sound like a person who’s on TikTok, even if you aren’t.