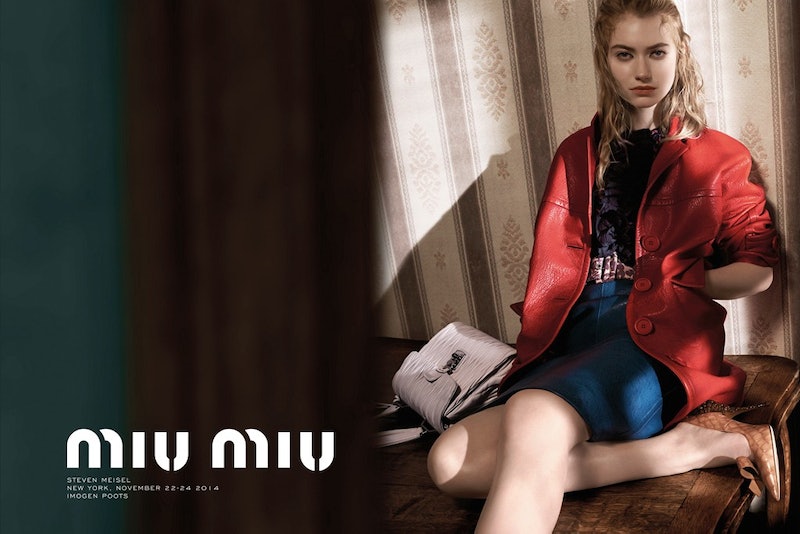 Sure, I'd take Oscar de la Renta or Monique Lhuillier for a red carpet premiere, but for street style and daytime events? It's Miu Miu all the way — a fact the brand just solidified with the Miu Miu SS15 ad campaign. There are few brands as charming; as deft at hitting just the right notes of unstructured cool, ultra-structured twee, and deconstructed glam. I mean, remember when Zoe Kazan and Dakota Fanning faced off in matching jewel-collared blouses? Besides, the design house regularly wins the front row style at Paris Fashion Week, and they had the good sense to swoop Lupita Nyong'o up as a brand ambassador for last year's campaign. So, of course it would follow that the Imogen Poots, Marine Vacth, and Mia Goth-starring Miu Miu SS15 campaign is kind of perfect.

Miu Miu is known for showcasing up-and-coming actresses (the Miu Miu SS14 ads featured the above Lupita Nyong'o, in addition to Elizabeth Olsen, Elle Fanning, and Bella Heathcoate) — so who exactly are this year's ladies in question? First off, there's Imogen Poots, who you might recognize from Jane Eyre (or, more recently, That Awkward Moment). Then, there's Marine Vacth, a French actress-model hyphenate, whose notable appearances include the Cannes Palme d'Or -nominated Jeune & Jolie and a stint as the face of Yves Saint Laurent Parisienne perfume. And finally? There's Mia Goth, who had a supporting role in this year's ultra-controversial Nymphomaniac , alongside beau Shia LaBeouf.

The red leather coat is fabulous (and is eerily similar to the one that Lena Dunham rocked in the front row), and her eyebrow game is off the charts (thanks, genetics and Pat McGrath!).

There's something very editorial about the severe, middle-parted hair and the non-existent eyebrows. Also, don't you love the contrast of the muted florals and the canary yellow textured handbag and and the graphic red and black shoes?

I'm calling MVP, here: The combined superlative girliness of the pink fur-collared coat, the ruffled blouse, the plaid skirt and the bowed shoes is epic, and that handbag is the cherry on top.

Excited about Miu Miu Spring 2015 (and its rising stars)? I sure am!