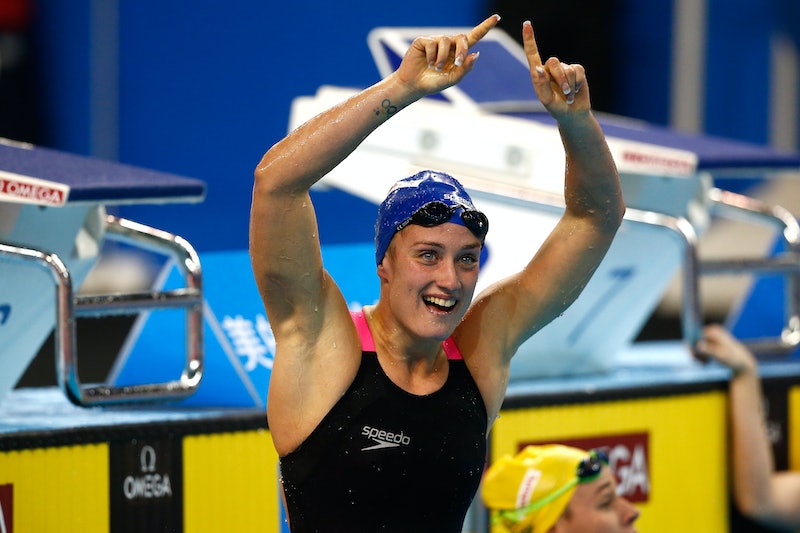 I've been a solidly decent swimmer my entire life, but at the age of 14, I was far from decent at basic things like human conversation, or even making it known that I was in a room. I was that painfully awkward kid who wasn't shy so much as calculating: I would always wait until the perfect moment to interject in a conversation, mentally rehearse my line for five minutes, and then blow it so massively that I was all too happy to rejoin the wallpaper where I belonged. So you can imagine that the day my swim coach personally sought me out, it was a day I felt important. The day I finally felt noticed. The day I found out... that my shoulders were such a massive force that I had become a swim coach's dream.

And yes, although the size of my shoulders meant several years of swimming the 100-yard butterfly at meets and mortally humiliating myself (seriously, one time the fire alarm went off during the event, and all the other swimmers had hit the wall and were timed but by the time I finished everyone was gone from the building), they came with another set of unique challenges, too. While I have come to embrace them in adulthood, there are still some struggles that only those of us with broad shoulders can appreciate:

You spent your teenage years slouching like nobody's business

I'm pretty sure strangers passing me on the street just assumed that everything I owned had just been burned up in a fire, given the way I slouched. In fact, I always thought that I just had Resting Sad Face because if I unexpectedly ran into friends in public, they would always ask me what was wrong when I was having a perfectly good time bein' my bad self. It turns out I was just a one-woman slouch machine (much to the chagrin of my mother and fellow choir members who many times tried to fix me).

You can never fit dresses over your head

WHO EVEN DOES THAT?! I am flabbergasted when I happen on friends getting ready for parties and they just slip on dresses like it's no big thing, and I'm stepping into them and tripping all over the place to avoid the dreaded shoulder snag.

Strapless anything is the enemy

It's not that strapless tops and dresses look bad on people with broad shoulders, it's just that nothing will stay where it should. It's hard to reason with your bulked out shoulders when they're like, "LOL, wouldn't it be funny if you flashed your goods to the entire senior prom?" Over time, we learn to compensate with fashion tape, but until then, we're all aboard the top-hoisting struggle bus.

You were the worst at hide-and-seek

Try shoving these shoulders into a small space. I DARE YOU. (I did get stuck in a swim team locker once for about ten minutes trying to do just that, and that's all I will say on the matter.)

The school picture taker was clearly out to get you

Like, when you look at the whole of those of us with broad shoulders, I'd like to think that the overall shape of it is aesthetically pleasing. But school pictures were always cropped at the widest part of your shoulders and made you look like you were gunning for linebacker on the high school football team.

You're never quite sure what to do with your arms

Is it just me or do they occasionally feel like limp noodles at the ends of a very long rod? Being the very vain individual I am, I spent ten minutes torturing my sister into taking a picture of me at the beach because I wanted to look cute in one bikini picture, and that poor girl tried so hard to give me directions until finally I just ended up letting my arms hang there like dead things.

People are always getting irritated and nudging you on public transportation

I don't take up much space but I cannot help the space that my bones take up, and I've noticed that on every long bus trip I've ever taken, a man (#notallmen, I know, okay, but I'm still going to tell this story) will sit next to me, thinking at first glance that I am mousy and will let him and his butt cheeks lord over the divide between our chairs, until he is rudely awakened by the piercing of my giant shoulder swords. And then he will proceed to indignantly worm around for the next few hours as if my shoulders will magically start phasing through the windows to give him the MAN SPACE he deserves. /endrant

Our one salvation! The fashion beacon of the late '90s/early 2000s! The one neckline that we could pull off no matter what! HOW COULD YOU HAVE FORSAKEN US?!

No, I'm serious, a bunch of bros got together and asked, "Do you find women with broad shoulders a turn-off?" Head's up to everyone in that forum: being a jerk on the internet is a bigger turn-off.

Everybody is always asking you to help them move their junk

Hulk jokes are a thing