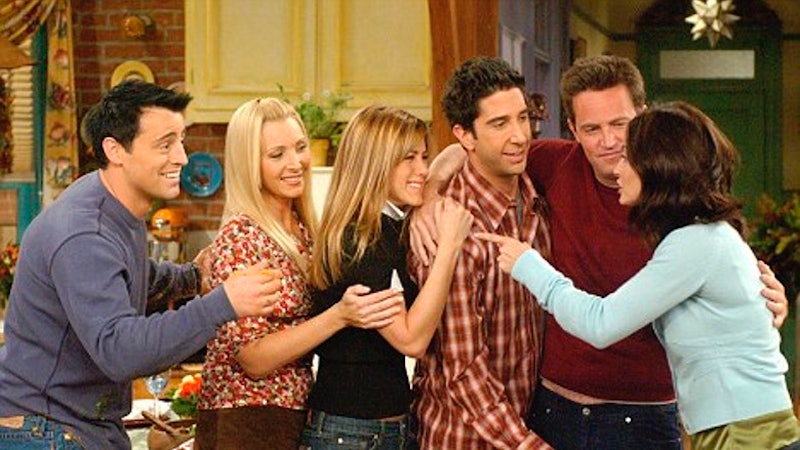 Look, I love my highbrow television — Mad Men, to me, is canon, because the writing is just phenomenal. The directing in Breaking Bad is art in itself. But it's the new year, and I'm not trying to start my 2015 binge-watching with such heavy fare. Good thing for me, then (and for everyone else, to be honest), Friends has finally been added to Netflix streaming. Maybe when they decide to put Seinfeld up, it will be the true first sign of the apocalypse.

OK, I have to admit that I was only four-years-old when Friends premiered, so rewatching Season 1 is kind of a trip. But, as always when you rewatch something that was iconic when you were younger, there are certain things you notice anew that make you go, WTF? I remember when I had the spiritual awakening that Grease was just one long sexual innuendo. So if you too are succumbing to the life-sucking k-hole that is an intense Friends marathon (watch responsibily: here are some tips), look out for all this wacky and weird stuff that happens in the first season. Wacky, weird, wonderful and what makes the show the show.

Speaking of Style, Get These Dudes a Tailor

Why are all their suits and blazers always hanging off of them? Why are their vests so saggy? How do they get anywhere without tripping over their absurd pant legs? Are not these grown men?

What Kind of Mid-Twenties Girls Have an Ottoman?

There's an episode when Monica gets salty that Rachel hasn't cleaned the apartment, so she folds and finally tidies. Much to Monica's horror, though, she discovers that Rachel has moved the green ottoman. No one should buy an ottoman until their mid-thirties, at the very least.

What the Hell is Up with Marcel?

How does Ross keep a monkey in his apartment, where he lives alone? Aside from the illegality of the whole exotic pet situation, I'm pretty sure he has a full-time job (the question of the Friends' employment is just sort of... accepted, you know, suspension of disbelief kind of thing). But if he's off at his dino job, who is watching after Marcel? This shouldn't bother me so much, but it does.

Speaking of Jobs, Why is Everyone Making Fun of Ross?

So many wisecracks about Ross' career. I say this totally objectively because I am, at best, indifferent to Ross Gellar, but why are Monica and Joey and Phoebe and Rachel and Chandler always giving Ross crap for his dorky job? Paleontologist sounds pretty cool, for one, but honestly, to make fun of their friend's job is SO a pot calling the kettle black situation for this gang.

Why Doesn't Anyone Talk About Getting Anywhere?

Obviously the illusion has been shattered that Friends was taped in New York. Fine. But you would think to lend an air of authenticity, you would have at least ONE person every few episodes mention that they were late because of the trains. Apparently the 6 train is always running perfectly on schedule in the Friends universe?

Clearly we all see ourselves in Chandler Bing, because he's the most awkward, dry and sardonic. Why, then, is his wit so underappreciated? No one laughs at Chandler's jokes! If had a Twitter today he'd get so many retweets.

When Did Joey Get So Dumb?

In the final few seasons of Friends, Joey turns into the town idiot. But in the first season, he's nowhere near as dim. In one episode they are playing Pictionary and Joey correctly guesses The Unbearable Lightness of Being. You think someone who can't even imitate one word of French would know a Milan Kundera novel?

I will generously forgive so many weird Friends plotlines, like the one where Monica becomes pals with the woman who stole her credit card/ identity. But the one where Monica and Phoebe are taking care of the hot guy in the coma and vying for his attention is too absurd, even for me.

The Age Gaps, Though

It always seems like the girls are dating men at least two decades their senior. Example: George Clooney the doctor, Rachel's ex-fiance Barry. His hairline, though. Notable exception: when Monica sleeps with a high school senior, but that was weird of a different breed.

I have mostly made peace with the money situation on Friends — where do they get their money? No one really knows, so we just have to assume that Phoebe has quite the lucrative career as a massage therapist. But how are they always eating so well? Monica makes a whole Thanksgiving dinner for the gang AND buys Chandler an entire separate meal. Nearly impossible for six twenty-somethings in New York with dubious employment.

No One Has Such Hot Neighbors

When Monica and Rachel find a stray cat during the blackout, it ends up belonging to Paolo, who is super Italian and super hot. NO ONE HAS NEIGHBORS THAT LOOK LIKE THIS. It's usually just a building full of different iterations of Ugly Naked Guy.

Who Are the Other People At Their Parties?

No one has any friends until it's New Year's Eve and suddenly Monica can fill her whole apartment with people.

The Barry-Mindy-Rachel Plotline is Inexcusable

Here's another one that seems just insane. Rachel starts sleeping with Barry again, the man she left at the altar. Then she finds out that he is engaged to Mindy, Rachel's maid of honor. THEN she finds out that Mindy and Barry had an unfair while he and Rachel were together. And the whole thing is resolved in 23 minutes with Rachel and Mindy being friends! Who has such an amicable resolution to such a shit situation? Also, why is this the first we're hearing about Mindy?

What's With the Baby Talk?

Maybe this one is just weird to me and MY friends, but if I were 26-27 like Ross is supposed to be and I found out that I was having a baby, I would be freaking the hell out. And then when Ben is born and Monica sees him she decides she wants kids! I see children and it strikes fear in my heart because I can't even take care of myself.

They're All So Supportive & Honest

Do I just have bad friends? No, I definitely do NOT, but I do know that it's hard for us to be straightforward with each other. Support is definitely there, but telling each other difficult stuff and being so brutally honest doesn't come so easy.

More like this
Netflix Just Revealed When 'Never Have I Ever' Seasons 3 Will Premiere
By Gretchen Smail and Alyssa Lapid
20 Photos From The 'Stranger Things' Season 4 Premiere To Make You Feel Old
By Alyssa Lapid
Will The Pentaverate Get A Season 2?
By Kadin Burnett
'Bridgerton' Season 4 Will Likely Focus On This Brother's Divided Heart
By Grace Wehniainen and Alyssa Lapid
Get Even More From Bustle — Sign Up For The Newsletter