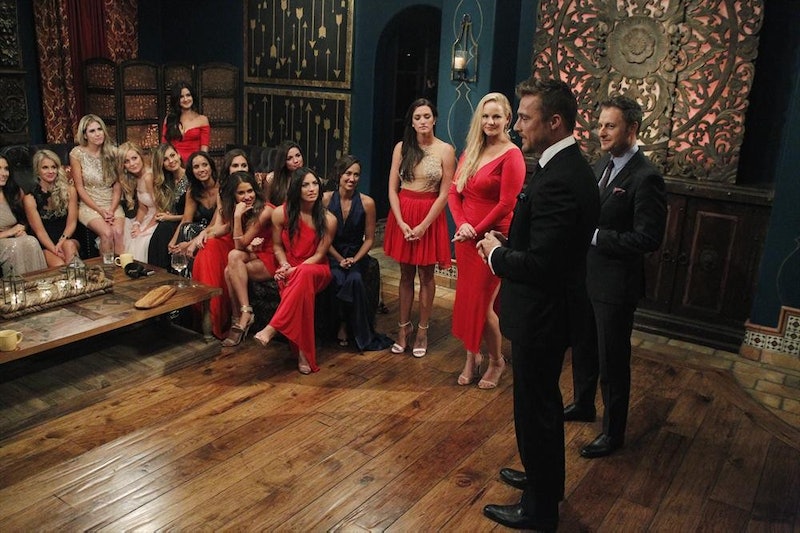 It's never easy to get rejected, especially on national television. But when Chris Soules sent home his first batch of women on The Bachelor premiere it definitely brought out the worst in the ladies. Instead of just feeling hurt, or sad, or maybe angry at Chris (who did the actual rejecting), they took their feelings out on the women who did get to stay—and they weren't very nice about it.

To be fair, Chris did keep some...questionable women around. Tara was pretty drunk, as was Jordan but he gave them both roses. He also kept hair stylist Ashley S. around despite the fact that she might actually be crazy. She kept talking about onions and saying odd phrases like "I wrote in my journal this idea of sunflower fields."

But Chris' decisions were his decisions and grumbling about how he kept "the drunk ones" instead of you is pretty low. Kara even explained that she was "a little servant" ready to be there for Chris and therefore totally deserved to stay over the intoxicated ladies. I understand that the eliminated contestants were upset and probably embarrassed, but it makes them look even worse that they didn't leave gracefully. One woman got so mad that she walked back into the house after she was eliminated. (We'll find out more about that next Monday.)

The women who leave on a classy note might not get Tweeted about or have GIFs made of them, but they also look a lot less rude and judgmental. Who hasn't gotten a little intoxicated in an inappropriate situation before? Does that mean that Tara didn't deserve a chance at love? (Jury's still out on Ashley S. and her love of onions.)

The point is, if you get sent home, go home. It wasn't meant to be and chances are those drunk women you hate will probably get eliminated soon anyway. As Elsa says, let it go.

More like this
‘The Bachelorette’s Michelle Young & Nayte Olukoya Explained Their Breakup
By Stephanie Topacio Long
Everything We Could Expect In Gabby & Rachel’s Season Of The Bachelorette
By Kadin Burnett
Twitter Is Still In Hysterics Over 'Love Island's Chaotic Heart Rate Challenge
By Frances Stewart
Winter 'Love Island' Will Be Back In 2023, ITV Bosses Confirm
By Maxine Harrison
Get Even More From Bustle — Sign Up For The Newsletter