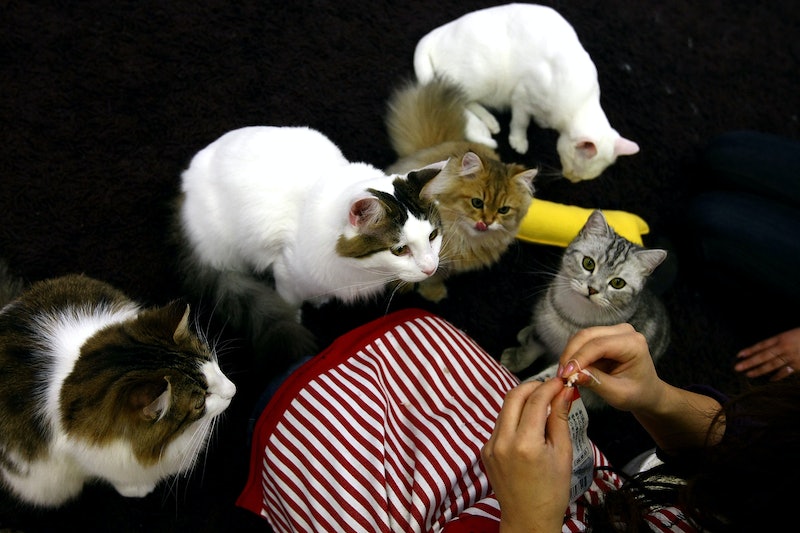 Attention all self-proclaimed cat ladies: you are going to have to up your cat-lady game, if there is such a thing, since 48-year-old Barbarella Buchner has just celebrated her 10-year marriage anniversary with her two cats. And I don’t mean she’s married to her cats like you might be “married” to your best friend on Facebook or like rappers are married to the money — I mean she went on a site called marryyourpet.com where she paid money to have a marriage certificate sent to her. I do not know if that marriage is considered legal, so don’t go dragging Mr. Fluffums down to the courthouse just yet.

The love affair started when Buchner ended a seven-year relationship (with a human) and found comfort in Spider and Lugosi, her cats. She told the Daily Mail, “After my human boyfriend had left, Spider and Lugosi were still there for me, helping me get through the separation anxieties and feelings of sadness.” She even went so far as to get her feline friends’ initials tattooed on her leg, because as she put it, “I realized my love for my fur babies is so much deeper than anything I have ever felt for a human.”

I am trying so, so hard to withhold judgment here but this is the most difficult thing I’ve had to do all year (yes, all six days of it). When discussing her marriage, Buchner said, “Some people may call me a bigamist for marrying two cats or even calling it incest because they’re brothers.” Yeah, I’m sure that’s what people would have an issue with — the fact that her cats are brothers and not the fact that they’re, ya know, animals.

However, it should come as a huge relief that no bestiality was involved in the making of this marriage. “Obviously I don’t have sex with my cats,” Buchner asserts. “It’s just pure, unconditional love on both sides, as simple as that.” That does make me feel a whole lot better. She adds, “There is nothing perverse or disgusting about my union with my cats…It’s like gay or polyamorous marriage. As long as they’re happy, why should anybody criticize them?” OK, I wouldn’t go so far as to liken gay marriage to cat marriage (mostly, if not completely because in what world can animals consent to marriage??), but I guess as long as no abuse is going on and everyone's happy I’ll just stay out of it and sip my tea.

Now, I know you’re all wondering about this Marry Your Pet site. I checked it out and either the people behind it are incredibly serious or incredibly serious trolls. My money is on incredibly serious. Take a look for yourself. This site has everything. It's got a heartfelt introduction that asks you the hard-hitting questions, like “if you really love him and you’re in this for life, isn’t it time you married your pet?”

It also has a detailed FAQ section to tackle the dilemmas surrounding pet marriage you probably haven’t even thought of, such as “How do I know he’s the one for me?” and “Can I marry a pet of the same sex?”

But the best part has got to be the site’s disclaimer to make sure that you are really ready to commit before taking the plunge. Apparently, pet marriages are not for the fickle.

Can anyone confirm that your pet can actually take half your house and income? Does this site do pet pre-nups, or would you have to go somewhere else for that?

Even though I have a lot of questions about this site and people who marry their pets in general, with prices ranging from 10 to 200 pounds, it looks like the founders are making some good side money off of this gig and I can’t fault them for that. Now, who wants to go into the pet prenup and divorce business with me? Maybe I should get Amy from that episode of Kitchen Nightmares in on this.