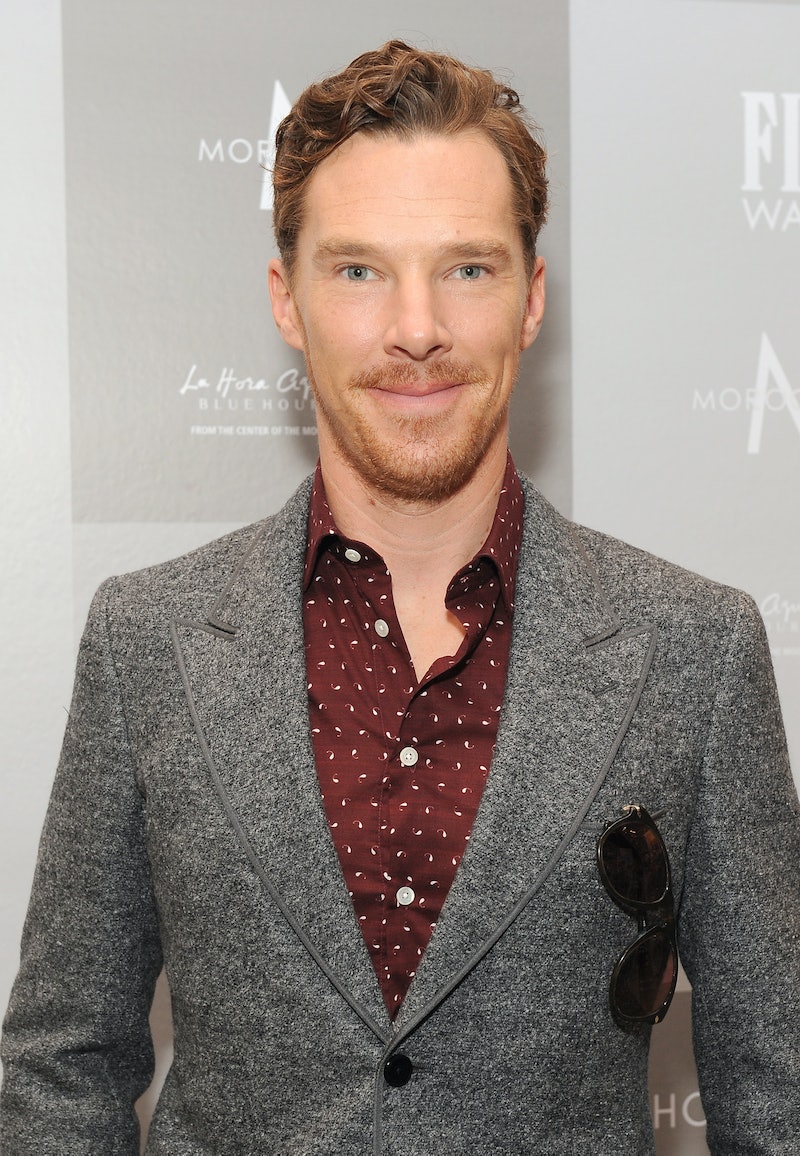 Benedict Cumberbatch has been the buzziest actor in Hollywood for the past three or four years. He seemed to appear out of nowhere and then Benedict Cumberbatch was suddenly in every movie, every viral video, and every single gif that Tumblr could muster. He's turned out some incredible performances that have earned him major accolades including an Emmy and a Critic's Choice Award for his role as the master sleuth in the BBC mega-hit Sherlock. He's been nominated for almost every major award under the sun since 2010 and this weekend he'll be up for his second nomination for a Golden Globe. He received a nod for Sherlock in 2013 and this year he's nominated for Best Actor in a Motion Picture, Drama for his powerful portrayal of Alan Turing in The Imitation Game . He's already considered a shoe-in for an Oscar nod and if he takes home the Golden Globe, it would bode incredibly well for the gifted actor. But does he actually stand a chance for winning?

Well, yes and no. The Best Actor race is an incredibly tight one this year, with each of the nominees playing the kind of roles that award panels live and die for. His fellow nominees include Steve Carell (Foxcatcher), Eddie Redmayne (The Theory of Everything), David Oyelowo (Selma), and Jake Gyllenhaal (Nightcrawler). As it stands, Redmayne and Oyelowo are his biggest competition. Redmayne completed transformed himself into Stephen Hawking and gave one of those, "I can barely see the movie through all of my tears" kind of performances. While Oyelowo portrayed with heart-wrenching precision one of the most influential figures in modern history, Dr. Martin Luther King Jr. With the recent public outcry in regards to Ferguson and the Eric Garner case, Selma is more important now than ever. Even so, Carell could totally steal it as Foxcatcher completely changed the course of the actor's career.

However, what Cumberbatch has above his competition is that je' ne sais quoi, the "it" factor if you will. Of course his performance is the reason why he was nominated. His turn as the man who cracked the Nazi enigma code in World War II was as lazer-focused as it was human, layered, and true to the individual. However, with years of "Big Thing" attached to him, 2015 may just be his year as 2013 was to Jennifer Lawrence. Sometimes it's not just the role and the actor that wins the award, but also the propulsion behind it. Does he deserve to win? Absolutely. Do his fellow nominees? Without a doubt. It's going to be a close one this year and Cumberbatch just might edge out his competition with the part that finally tipped the scale.

Take a look at what is perhaps Cumberbatch's finest performance:

More like this
What Is Brad Pitt’s Net Worth? The Bullet Train Star Now Makes 8 Figures Per Film
By Hugh McIntyre
Jennifer Coolidge Needs 'Legally Blonde 3' To Happen So She Stops Getting Hot Dog Jokes
By Jake Viswanath
Stephen Graham’s Wife Plays A Vital Role In His Career
By Emma Madden and Sophie McEvoy
At 14, Rachel Sennott Had A Sexual Awakening While Reading 'Twilight'
By Samantha Leach
Get Even More From Bustle — Sign Up For The Newsletter