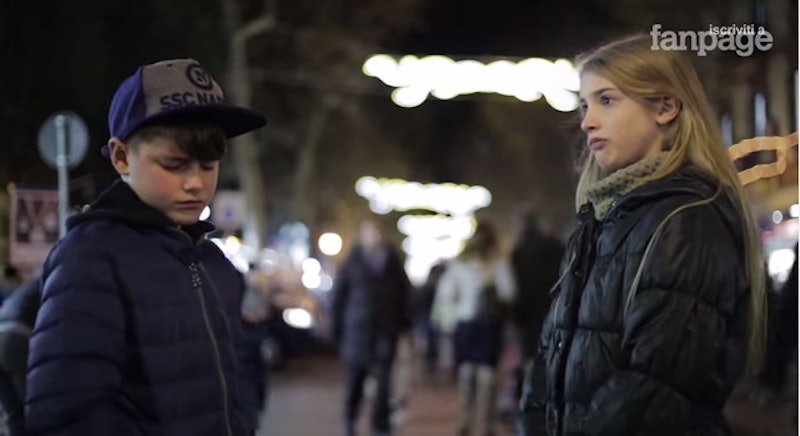 Yesterday the "From a Slap" video by the Italian news website Fanpage.it popped up on my news feed and, even though I didn't understand the Italian captions, I clicked on it. Immediately the light, childish music drew me in and I giggled along with the young boys as they talked to an off screen interviewer about their age and dream jobs. I laughed again when the interviewer brought in a girl named Martina and the boys got even more giggly and awkward.

After introducing Martina to the boys, the announcer asks the boys to compliment her, make a funny face for her, and even caress her. I thought the last one was a pretty awkward thing to ask young boys to do to a strange girl, but then the interviewer asked the boys to slap Martina. Hard.

My feelings were reflected in the faces of the young boys as they stared at the offscreen interviewer with a mix of horror, shock, and maybe even a little disappointment. One by one, the boys shook their heads no, and gave some simple, yet eloquent reasons for why they wouldn’t slap her, varying from “Because I’m against violence” to “Because I’m a man.”

The video tries very hard to appeal to our sensitivities to deliver a simple message against domestic violence, but it isn’t perfect. For one, most of the boys’ explanations (that they’ve clearly been taught by elders) reinforce the gendered stereotypes of girls needing protection from boys. And as some commenters pointed out, the video doesn’t draw attention to the many faces of domestic violence. Women can also be perpetrators of violence to their partners, and men are often overlooked as victims, just as relationships that aren't heterosexual are excluded from discussions about domestic violence.

While situations other than the one hinted at in the video exist and also need to be discussed, it’s also important not to derail the conversation the video introduces. A disproportionate number of domestic violence victims are women, especially in countries such as Italy. Domestic violence against women is so pervasive in the country that in 2013 Prime Minister Enrico Letta described the killings of women by their current or former partners in Italy as “femicide." In August of that year, the Italian government passed new laws that cracked down on cyber-stalking and made it easier to report and prosecute perpetrators of domestic violence before their attacks turn fatal.

No, a carefully staged video might not serve as the wake-up call against domestic violence that Italy needs, but it does further publicize the nationwide crisis. Hopefully people will pay attention to the message on ending domestic violence from the mouth of babes. And as conversations against domestic violence grow to include relationships across the spectrum, more responses will echo the little boy whose reason for not hitting Martina is as simple as “I don’t want to hurt her.”