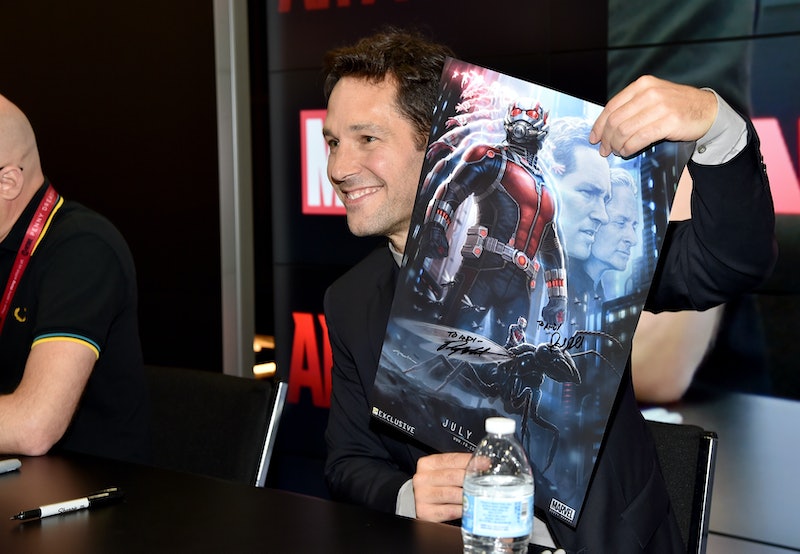 If you tuned into Agent Carter on Tuesday night, you got a mini-treat along with a miniseries. We just got our first full teaser trailer for Ant-Man , the Marvel Cinematic Universe offering for July of this year. The tone was all over the place, which isn't surprising considering how rocky the Ant-Man production has been. The clip started out as gritty as The Dark Knight and ended with the self-aware comedy of Guardians of the Galaxy, so I don't know what to think. There was boxing, and then a CGI ant being ridden like a horse. Was that an animal, or some kind of plane? I need to read up on Ant-Man history, clearly. Paul Rudd was looking pretty damaged and brooding, but seemed like his old self again while asking Michael Douglas if he was set on "the name" — but at least we can agree that it's a silly name. We also learned that Paul Rudd's character, Scott Lang, has a daughter. Is Ant-Man the first Hot Dad Marvel hero? Unless Pepper Potts has some news, I think he might be.

In the teaser, we see Hank Pym, played by Michael Douglas, offering Scott a second chance by becoming "The Ant-Man" and finally being the hero that his daughter already thinks he is. Lang appears to have done some jail time. Hank Pym, who was the original Ant-Man in the comics, has been watching him.

We saw a glimpse of Corey Stoll as Darren Cross, but he's not Yellowjacket just yet. He looked pretty much the same as his House of Cards character. Also, does Evangeline Lilly's bob hairdo confirm my theory that Hope Van Dyne is going to be Wasp? Her look fits Wasp's Marvel comic character description. However, I still have hope that Janet Van Dyne, the original Wasp, will show up on Agent Carter.

Take a "really close" look at the teaser for yourself. Would you give Ant-Man a chance?