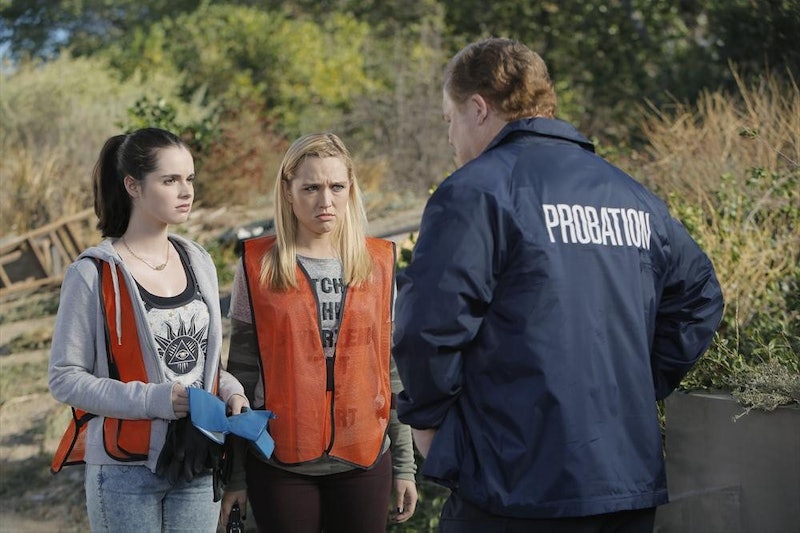 If you've been paying attention to Switched at Birth, you already know that Tuesday night's Season 4 premiere is centered on the hot mess that is Daphne and Bay's criminal situation. Basically, Daphne was headed to prison in the Season 3 finale after being charged with a felony for property damage... and at the last minute, Bay stepped in and took the blame, knowing she'd get a lesser punishment since she wasn't on probation. But as Tuesday's episode has proven, that isn't necessarily true, and by the end of the season premiere, Bay was regretting her decision — big time. So the real question at this point is this: How long is Daphne going to let this go on?

Personally, if it was me, I would have let Daphne rot in jail. I understand she was going through a lot in dealing with Angelo's death, but she used it as an excuse to destroy her own life and cause as much additional destruction as possible for the lives of everyone around her. She probably could have used 90 days in prison to think about what she's done. But this is an ABC Family show, not Orange is The New Black, and Daphne walks free. Instead, Bay is sentenced to house arrest and probation, and as it turns out, that's just the beginning.

Because now Bay's been charged with being an accessory to a drug deal. Perfect, right? In case you missed the episode, the short of it is that Bay passed a lunch on to a fellow community service worker from his sister who said he forgot it. And not only was this dude actually a state prisoner, but the sandwich in his lunch contained heroin. Boom: 100 more days of probation, and everyone has even more reason to hate Daphne.

I can't see this going on much longer. Now that Daphne's rejected her acceptance to Galladet and has decided to take pre-med classes at a local school to be near home with Bay, it's already clear she's feeling pretty guilty. And after the way Toby went off on her? She's probably feeling pretty bad about now, and if she allows Bay to finish out her sentence without consequence, she sucks even more than I originally thought she did. How annoying is it going to be if we have to spend the rest of the season watching Daphne learn doctor stuff while Bay suffers in her room at home? No thanks.

Next step for Daphne: Go to the police station and confess that you damaged that tractor, not Bay. Say it with me, Daphne: "Everything is my fault, and I'm kind of a spoiled brat." Much better.