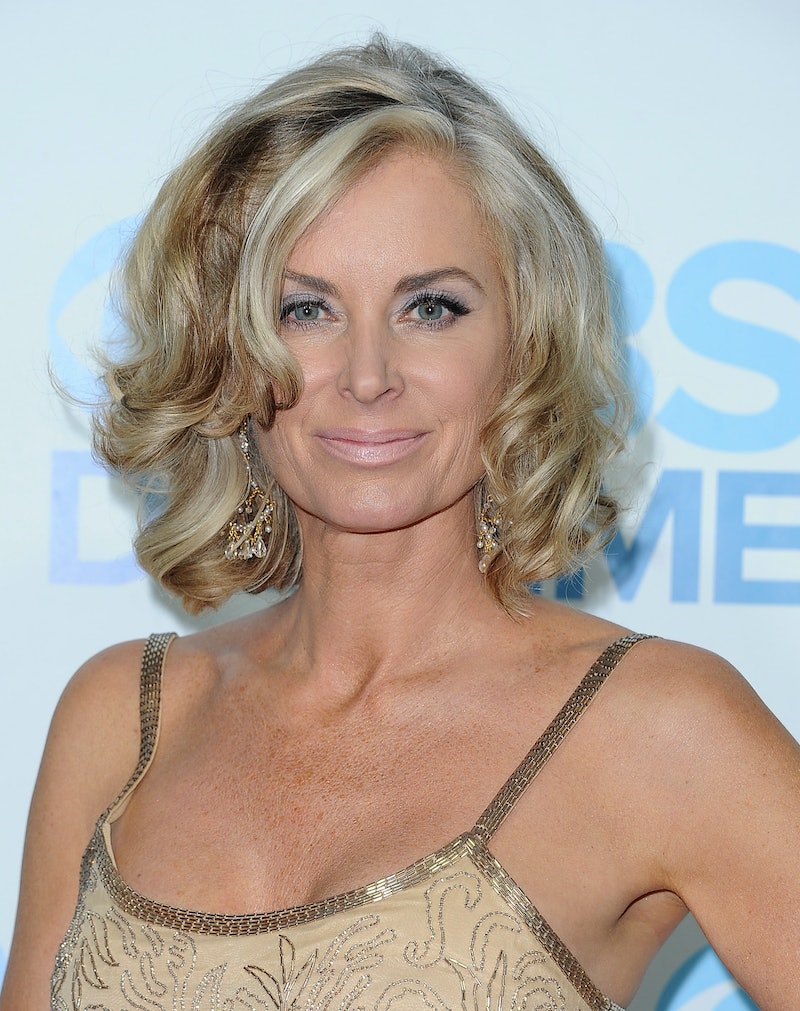 I have a lot of questions for Brandi Glanville after Tuesday's episode of Real Housewives of Beverly Hills, but I think the most important one is why, Brandi, did you throw your wine at Eileen Davidson? I don't know why, Lisa Rinna and Eileen don't know why, Yolanda has absolutely no clue what is going on, and most importantly, I don't think you know why you threw the wine, too. Whether it was the superfan in her, or the wine possessing her arm, Brandi's wine toss at Eileen on RHOBH might have just made a new enemy for Brandi, and I think we all know she doesn't need anymore of those.

The dinner where the incident occurred — those present were Lisa Rinna, Eileen Davidson, Yolanda Foster, and Brandi Glanville — started off pretty normal. There was a touchy moment that I am sure we were all cringing about, when Brandi learned that Eileen and her now husband Vincent were both married when they met. In case you didn't know this about Brandi (she has only mentioned it 2, 3 hundred times), Brandi was cheated on by her ex-husband, Eddie Cibrian, so she is sensitive when it comes to infidelity.

Shockingly, though, Brandi handled the news pretty well. She didn't climb over the table and rip Eileen's hair out. She didn't even throw wine at her (that happened later). But things felt... off. Brandi kept pressuring Eileen to flip her hair just like one of her soap opera characters (Brandi's been a huge fan of Eileen's for a while), and at one point, Brandi even offered Eileen $40 to be her character. It was super weird, and Lisa Rinna — if you're reading this — your gasps, and peanut gallery comments really made the weird situation stranger (but in a good way).

That's when it happened, when Brandi flinged her glass and threw a swig of wine at Eileen. Everyone gasped. I think I even heard Teresa Giudice gasp from prison. Somehow, Eileen remains calm and just pats her face and hair, like it was NBD, and puts her hat back on. Meanwhile, me and Lisa Rinna are thinking, "What the literal eff just happened?"

The next day, Yolanda hosted a dinner party which everyone attended, bringing Eileen and Brandi face-to-face. By the time Brandi gets there, Eileen has debriefed the missing housewives on what happened the night before between her and Brandi. Brandi wasted no time asking Eileen to step aside, where she apologized to Eileen and offered her a necklace. While I think a peace offering is really kind, I don't get why Brandi gives unwrapped/ unpackaged gifts to people. I am starting to think they are her necklaces that she doesn't really want anymore, so when she screws up, she just gives them away.

Eileen, being the Emmy winner she is, accepted the apology, but is still planning on keeping an eye on Brandi. You and me both, Eileen.