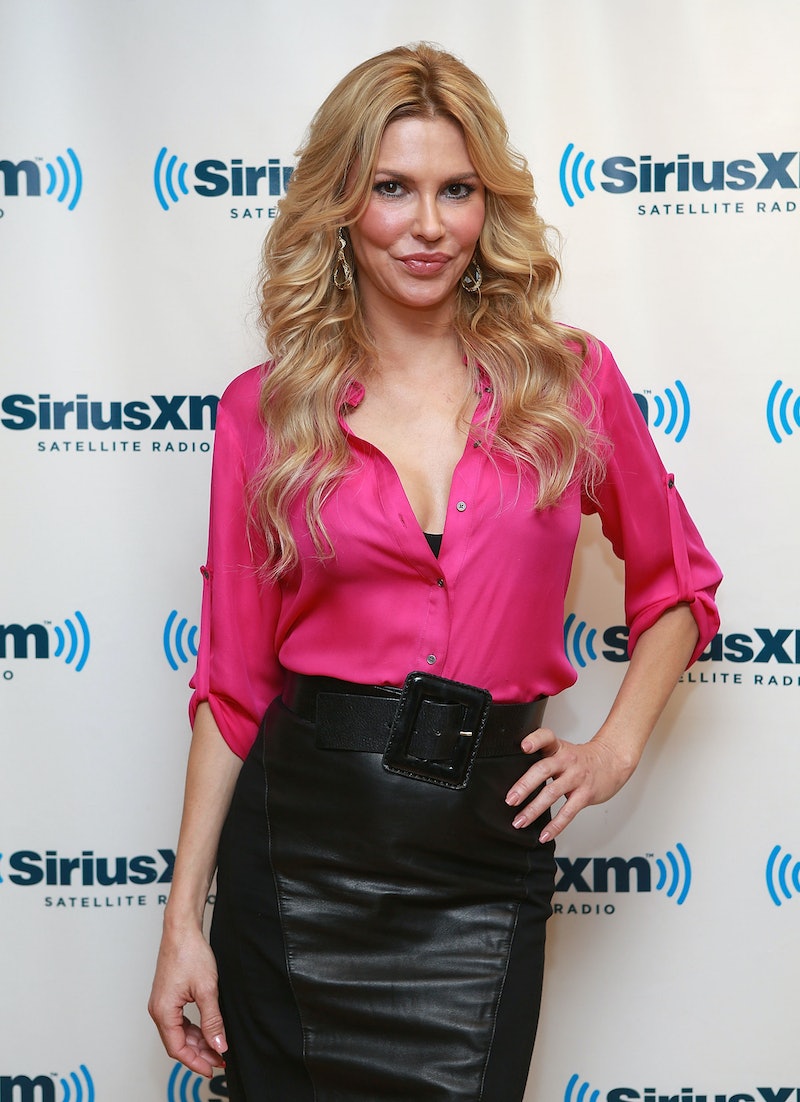 As Real Housewives of Beverly Hills fans are well aware, loose cannon and New York Times bestselling author Brandi Glanville has written another tell-all. Drinking & Dating: P.S. Social Media Is Ruining My Life will hit shelves Feb. 11. If you're not a RHOBH devotee, you might recognize Glanville from the tabloids and gossip rags. She's the Housewife who writes brilliant poetry, says shitty stuff, fights with the other Housewives, tweets-feuds with LeAnn Rimes, and was cheated on by Eddie Cibrian. She really is one of a kind.

According to Amazon, Drinking & Dating "chronicles Glanville’s misadventures stumbling through today’s dating world." And of course, "social media blunders" are a part of the book, too. Write what ya know, duh. Thursday, RadarOnline shared a few excerpts from Drinking & Dating. I did the only thing I could do: I retrieved a knife, fork, and plate from my kitchen, and prepared to eat the quotes UP.

The excerpts address the claim that she had multiple affairs while she and now ex-husband Cibrian were married. If I’m being perfectly honest, I forgot that was ever a thing. No no, I remembered she was married Cibrian. How could I ever forget that? But it's been a while since I thought about her maybe-cheating on him with some other famous dudes. That story came out a year ago. A YEAR AGO. A lot has happened in Glanville Land since then. The space in my brain reserved for "Glanville News" does have a limit.

Anyway, the excerpts aren't that crazy. I'd hoped to be floored by whatever it is I read. I wanted to be shocked AND awed. I wanted to be like, "I CAN'T BELIEVE YOU WROTE THAT, BRANDI. I'M GOING TO PASS OUT NOW. THAT WAS TOO MUCH OF A REVEAL FOR MY MIND TO PROCESS."

Instead, I was like, "Oh. Okay then. That was pretty tame." And then, I was hit with a wave of disappointment. Such is the danger of having too high of expectations.

Though I might've been underwhelmed, what do the other Beverly Hills Housewives think? I don't know how to reach any of them for comment, so I chatted with some RHOBH GIFs instead.

“Last year, I discovered, much to my surprise, that I was an unfaithful wife.”

Hey, Carlton Gebbia! How do you feel about people calling your pal an "unfaithful wife"?

“Who on earth could have anything to gain by leaking false information about an alleged affair seven days before the tell-all book about my philandering ex and his mistress [Drinking & Tweeting] hit bookstores Hmmm. You tell me.”

Do you know who said it, Kim Richards? Any names you want to offer up? Any suspects?

That's cool, that's cool. You don't want to get in the middle of it. I understand.

“To top that, my ‘affairs’ were apparently with former NBA player Rick Fox, who I don’t believe I’ve ever met, and restaurateur Harry Morton. Knowing what I do now about what a sham my marriage was, I may have welcomed dating either one of these eligible bachelors, but it just wasn’t true.”

Ooookay. We'll leave it at that.

“Did I casually and frequently date before my divorce was finalized and my husband was already in a public relationship with another woman? Hell yes, I did.”

Lisa Vanderpump, you always have a clever response. Hit me with it!

“Did I ever have an affair before that? No. Not ever. That’s just not in my DNA.”Anything you want to add, Joyce Giraud?

Yikes. Anything you want to add, Yolanda Foster?