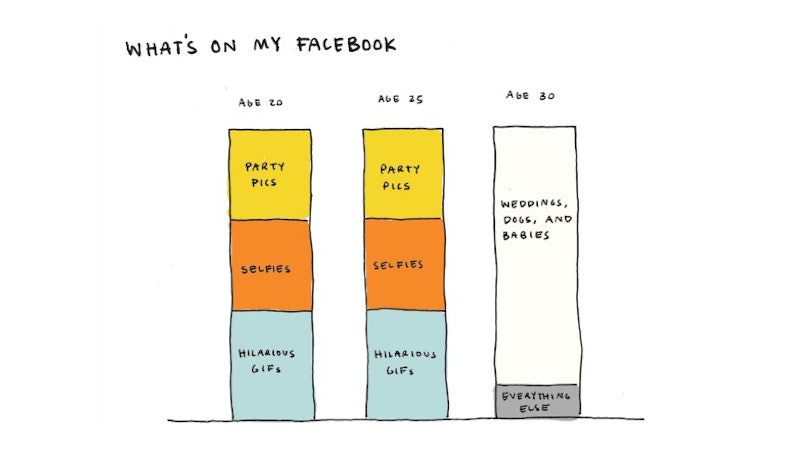 In just a little over two months, I’m going to be bidding my 20s farewell and saying hello to my 30s. It’s kind of a weird thought to me — but hey, at least The Bold Italic’s hilarious charts and graphs describing what turning 30 is like are here to help me through the transition. Written by Cecilia Rabess and illustrated by Jessica Saia, they perfectly encapsulate the differences between being in your 20s and being in your 30s — and you know what? As it turns, I’m actually already there when it comes to a lot of the topics at hand. I guess I’ve been mentally preparing for it ever since I turned 29. Or something.

Another glorious bearer of the “Made Up Charts” tag I love so much, this series of charts and graphs cover everything from the percentage of your furniture that came from IKEA to what celebrating your birthday is actually like. Not only are they hilarious (for some reason, nothing makes me laugh quite as hard as a well-thought-out chart), but even more importantly, they’re relatable. Sometimes it can seem like you’re the only person in the world who has gone from watching HGTV because you’re hungover to watching it because you actually enjoy it — but that’s actually not the case. We’ve all either been there, are there currently, or are rapidly approaching there; knowing this fact makes it a little less lonely and a little more doable. We’re all getting older as every second ticks by, so we may as well embrace it, right?

Here are my four favorite charts; head back on over to The Bold Italic to see the rest.

Where Your Priorities Lie:

Yep. I mean, yes, I realize that I am a terrible sleeper, which is what necessitates a two hour long going-to-bed ritual beginning at 9 PM… but still. After many years of ridiculous bedtimes, being able to put myself to bed by 9 PM is a luxury.

Funny how your perspective changes with just a few years' time, isn't it?

The Contents of Your Social Media Feeds:

This is absolutely, 100 percent accurate (although I would also add “cats” to the “weddings, dogs, and babies” section). Every weekend, like clockwork, my newsfeed fills with a brand new batch of wedding photos and baby announcements, with a few pet snaps in between. I’m guilty of the pet thing, but I haven’t yet reached a point where I’m ready to get engaged, let alone raise a child. It’s one of those things that makes me feel exactly like a real-life version of Mo Welch’s “Live from Lombard” character, Blair — but then I remind myself that the idea of equating hitting certain “milestones” with "success" is dumb. Hoorah for all the people who are getting married and having babies, but also hoorah for those who aren’t. Yay!

Who You’re Allowed to Date:

I may not be engaged, married, or having kids, but I am in a committed, long-term relationship with someone society deems age-appropriate. So, y’know… at least there’s that. Or something. Man, am I glad I'm not actively on the dating scene right now.

Images: Courtesy of Cecilia Rabess for The Bold Italic