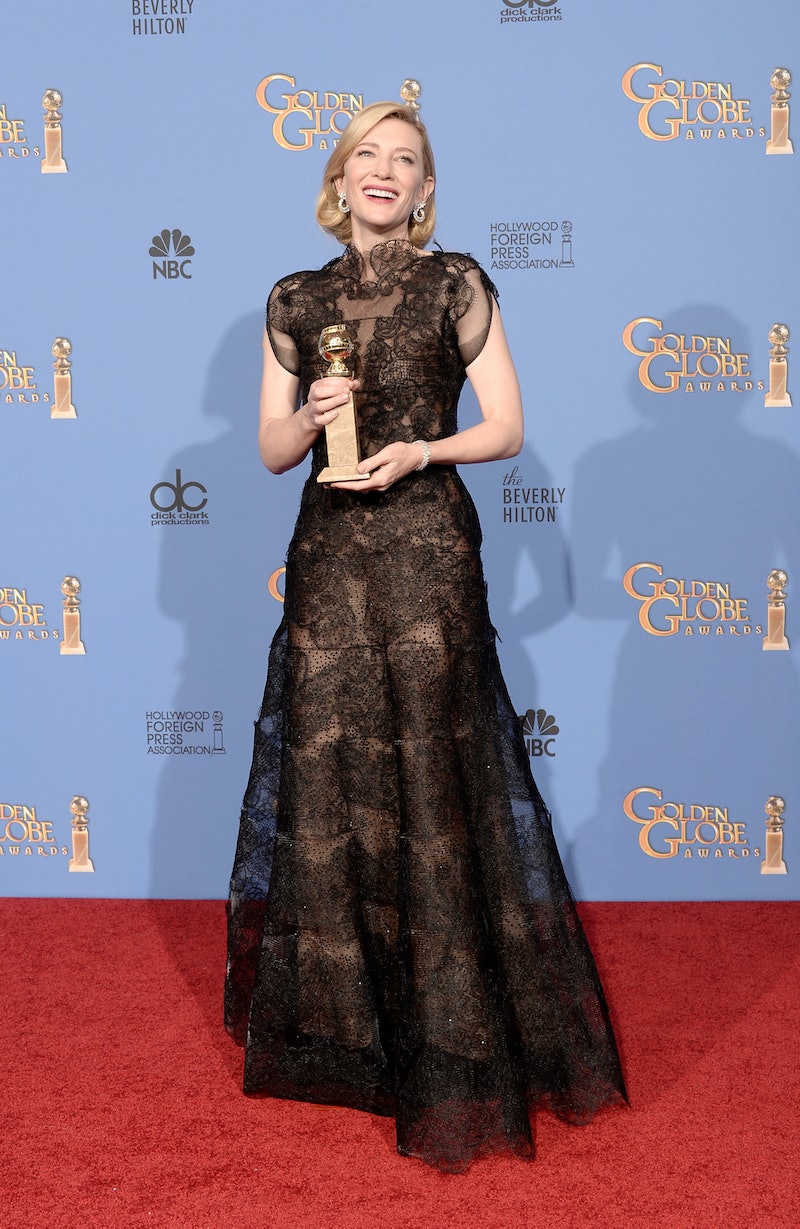 For people like me, awards season is fun, but it's all just build up until the real deal comes along — the Academy Awards — the grandest of all the awards ceremonies. The Golden Globes are second best, so can the Golden Globes predict the Oscars? There are tons of categories in both ceremonies, but usually people are most concerned with the Academy Awards' Big Five, which are Best Picture, Actor, Actress, Director, and Screenplay (sorry, technical people). Supporting Actor and Actress are also buzzy categories — maybe even more than Best Screenplay (sorry, writers — womp, womp).

The Hollywood Reporter wrote that although the Golden Globes may not always predict the Best Picture winner at the Academy Awards, it's usually pretty in line with the Oscars when it comes to other categories — particularly Best Actress. The article was published in 2012 (before both awards ceremonies that year). At that point, the Best Actress winner at the Oscars had also won a Golden Globe for the same performance 17 times out of the previous 20 years — that's an 85 percent prediction success rate.

In the three additional awards seasons since The Hollywood Reporter's article, the actresses who won the Oscar, had already won a Globe: Meryl Streep in 2012 for The Iron Lady — check. Jennifer Lawrence in 2013 for Silver Linings Playbook — check. Cate Blanchett in 2014 for Blue Jasmine — annnnnd check. That bumps the success rate of prediction for the Oscars Best Actress race to 87 percent (20 winners out of the last 23 years).

Now to be fair, if we want to stick with a nice round number of 20 years — the percentage actually goes back to 85 percent since the Best Actress winners at the Oscars in 1992, 1993, and 1994 all won Globes too (Jodie Foster, Emma Thompson, and Holly Hunter, respectively). And there was the wacky year of 2009, where my main homegirl Kate Winslet took home two acting Golden Globes (supporting and lead in drama), but then won the Oscar for the movie she had won the supporting Golden Globe for (The Reader).

But what helps the Golden Globes be so successful in forecasting the Oscar winners is really the fact that they have double the chances. As Anthony Breznican (a writer for Entertainment Weekly) told the New York Daily News , "[The Golden Globes] have two categories: Drama and Comedy/Musical ... So they can double their trophy giveaway and that gives them two shots for getting it right." It's not like the sole purpose of the Globes is to tell us who will win the Oscar, but the Academy Award is the more prestigious of the awards. And Breznican did say that the Hollywood Foreign Press Association (HFPA) does consider the Oscars when they choose the Globe winners. "The Globes try very hard to analyze the voters (in terms of) where they think the race is going, and I think that influences the Globes — and not the other way around."

Breznican also made the important distinction that less than 100 journalists make up the HFPA, while the Academy is made up of thousands of people involved in the filmmaking industry. That adds to the importance of winning an Oscar (just think about the weight the words "Academy Award winner" have before an actor or director's name). Another factor that distinguishes the Oscars from the Globes is that the Academy is more selective. Only five people get a chance to win in each category — not 10 like at the Globes. (This is also how Leonardo DiCaprio has won two Golden Globes and no Oscars — but that is just a travesty. A travesty, I say!)

Of course, that's a different story when it comes to the Best Picture race. In 2010, the Academy expanded the number of Best Picture nominees to 10. But there aren't always 10 films worthy of being considered for Best Picture — so they swiftly changed the rule so that the Best Picture category can range from 5 to 10 nominees, depending on the year. Because of the — uh, shall we say — elitist nature of the Oscars? (and I say that in the gentlest way possible since I am an Oscar snob myself), the winner of Best Picture is much more aligned with the winner of the Golden Globe Award for Motion Picture - Drama.

But that's what makes the Oscars the Oscars and the Globes the Globes. Not only can the HFPA award achievements in television at the Globes (which everyone knows TV is beneath the Academy — just playing, Academy. I heart you), they can also acknowledge more lighthearted fare with the separation of comedy and musicals from drama.

The 72nd Golden Globe Awards take place on Sunday, Jan. 11, while the Academy Awards ceremony is on Sunday, Feb. 22. And it's probably safe to say that Rosamund Pike, Reese Witherspoon, Felicity Jones, Jennifer Aniston, Amy Adams, Emily Blunt, Helen Mirren, Quvenzhané Wallis, or Julianne Moore (who was nominated in both the drama and comedy/musical categories) will take home the Best Actress Academy Award in Feb. Although, I guess, you never know. Entertainment Weekly came up with some other potential Best Actress nominees back in Nov. — and the precedent as of now is that there's a 15 percent chance of an upset. But the last time that happened was in 1997 — when Frances McDormand deservedly took home the Best Actress award for Fargo — and the Globes didn't even nominate her. And that was a big oversight, don't cha know.