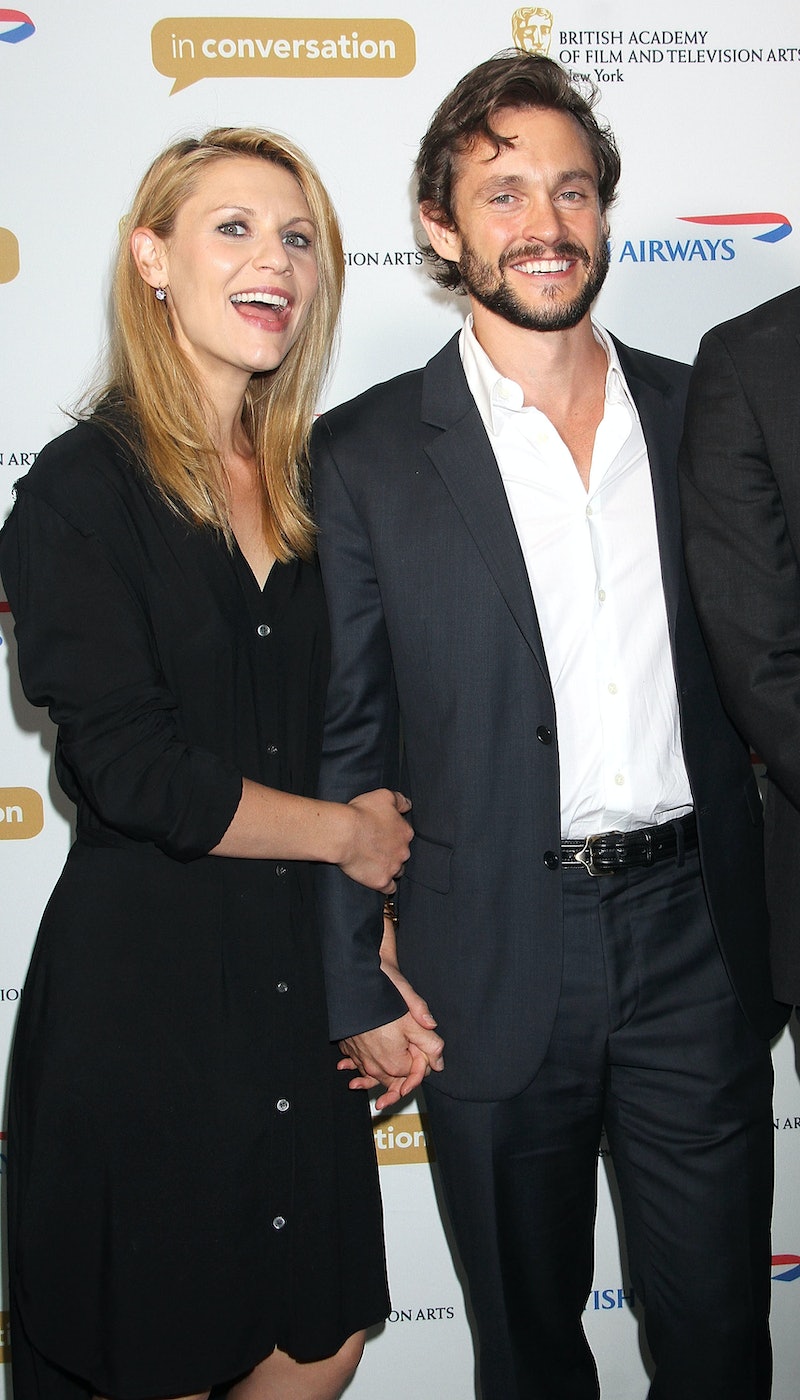 With the 2015 Golden Globes right around the corner (Sunday, Jan. 11, to be exact), it's time to take a closer look at the nominees, like a particular Homeland actress nominated for Best Actress in a TV Drama for her role as Carrie Mathison. That's right, I'm talking about Claire Danes. Once again, the actress scored a nom for her role in the Showtime success. She's come a long way since her days on My So-Called Life, including the fact that Claire Danes is married to Hugh Dancy. He's also an actor known for his role as Will Graham on NBC's Hannibal, but don't worry, I'm pretty sure the couple doesn't practice cannibalism in real life.

Like pretty much every other couple in Hollywood, Danes and Dancy fell in love onscreen and, for them, it was thanks to the 2007 movie Evening. The drama follows Danes' character, Ann Grant, and her "romantic past and emotional present." Apparently, the love portion of the movie got to both Danes and Dancy (wow, don't their last names go so well together?), because they fell in love and have been inseparable ever since.

Danes and Dancy married in 2009 and made their wedding a France-y (get it?) affair. It was a quiet ceremony which went with their dating style — very low-key. According to their Evening co-star Mamie Gummer, Danes and Dancy fell in love and bonded over Boggle and Scrabble. OK. Stop it. Gummer said,

I was there when it was happening and it's something that I will never forget. I'm incredibly happy for them. They are perfect for each other.

As for what Danes thinks of her hubby, in the December 2014 issues of Glamour, she gushed about Dancy saying,

He is a gentleman. Downton Abbey-esque? I guess. He was raised well, went to great schools, he’s a clever guy and he makes me giggle… I scored. I lucked out, big-time! But when you’re truly intimate with somebody, they tend to lose their physical shape, you see through them. Occasionally I’ll wake up and notice his… form. And I’ll be, "Oh, wow. Dude. Is a looker." Then I get shy, all over again. It’s not why I love him, but it’s a very nice bonus.

So what about Dancy? He loves his wife and said she's amazing to watch at work,

She tries to be very honest, without artifice, in what she does. And it is hard to do that and be interesting and create something big. I know from experience, and watching her now on set, that she is fantastic to work with, generous without trying to be generous.

Yep, these two sound obsessed with one another, as they should be. They are married, after all, and have a child together. In 2012, Danes and Dancy gave birth to their first child, a boy named Cyrus Michael Christopher Dancy.

Now that you know a little bit more about their romance and married life, here are some photos showing some adorable moments between the happy couple.

That Time Claire Kissed Hugh on the Cheek

That Time They Looked at Each Other Like This

That Time They Danced

FYI: I'm pretty sure this is from Evening, the movie they met on.

Lastly, That Time You Could Smell Love by Just Staring at Them

More like this
Bennifer's Relationship Timeline Now Includes A Grammy Date Night
By Jake Viswanath
Mila Kunis Had Strong Words For Ashton Kutcher Over Demi Moore Divorce
By Sophie McEvoy
Vanessa Hudgens Is Reportedly Engaged To Cole Tucker
By Jake Viswanath
Pamela Anderson’s Dating & Marriage History Could Be Its Own TV Series
By Jake Viswanath
Get Even More From Bustle — Sign Up For The Newsletter
From hair trends to relationship advice, our daily newsletter has everything you need to sound like a person who’s on TikTok, even if you aren’t.