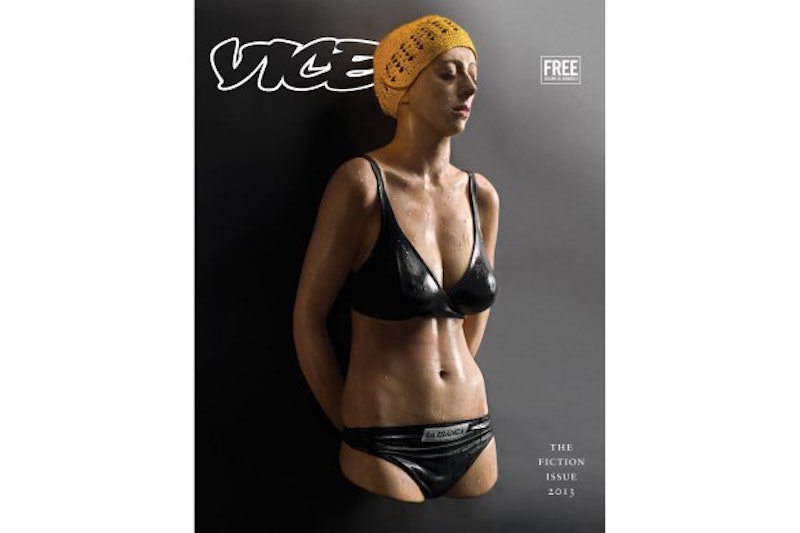 Suffering from depression, Sylvia Plath committed suicide at the age of 30 by placing her head in a gas oven. She was found dead of carbon monoxide four hours later, lying on her kitchen floor.

Apparently, Vice thought this was glamorous. Last Words, the fashion spread for their most recent Women in Fiction issue recreated the suicides of seven female writers—including some who didn't even write fiction. Virginia Woolf is wearing a flowing vintage dress as she wades into the sun-dappled stream where she will drown herself. Dorothy Parker dramatically models an outfit from The Row as blood drips from her wrists and into the sink. In novelist Sanmao's photo, Vice included the fashion credits for the tights. The ones with which she's hanging herself.

As the Internet rose up in arms against this glamorization of suicide, Vice pulled the spread and issued an apology. Here's the statement from the editors:

"The fashion spreads in VICE magazine are always unconventional and approached with an art editorial point-of-view rather than a typical fashion photo-editorial one. Our main goal is to create artful images, with the fashion message following, rather than leading.

"‘Last Words’ was created in this tradition and focused on the demise of a set of writers whose lives we very much wish weren’t cut tragically short, especially at their own hands. We will no longer display ‘Last Words’ on our website and apologize to anyone who was hurt or offended."

The sad part is that this was Vice's best idea for the Women in Fiction fashion spread. One of their last fashion spreads, No Man Left Behind, shows trendy army men. New soldiers get their heads shaved, bond over boot-lacing, and go through training in the desert sand. You'd think Vice could think of female writers doing something else than dying.

More like this
Google Wants You To Shop Black-Owned The Friday After Thanksgiving
By Dominique Norman
Kim Kardashian Fans Are Calling On Her To Condemn Balenciaga’s Latest Campaign
By El Hunt
Here Are All 703 Outfits Rachel Wore On Friends
By Kat George
Iran Has Issued A Death Sentence Over Mahsa Amini Protests
By Catharina Cheung, Darshita Goyal and Maxine Harrison
Get Even More From Bustle — Sign Up For The Newsletter