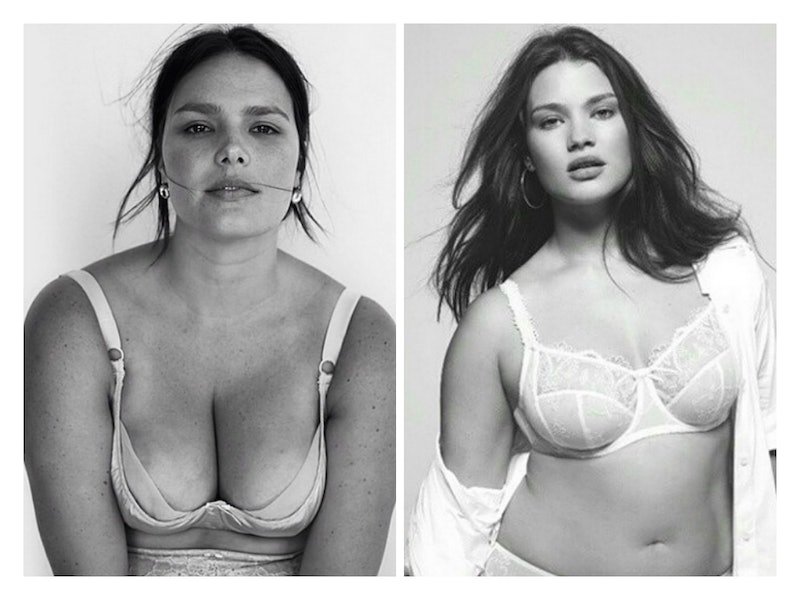 What is beauty? Isn't that the question that constantly racks our brains? If we were going by the vast majority of the media, we can all probably agree that to be beautiful is to have flawless skin, glossy hair, crystal white teeth, a proportionate body that is not too thin but not too fat — all in addition to being bright-eyed and bushy-tailed, of course. But frankly, this is bull shit. And it is part of the reason that so many women, and men, have crippling body image issues. There's this common misconception out there that sufferers of poor self esteem are typically heavier woman who stare in their mirrors, pinching their belly and thinking, "Why can't I be thin?" But in actuality, the woes of self doubt are not as confined to this one particular kind of person as so many people seem to think. Because basically everyone, at some point in their lives, has experienced some less-than-loving feelings toward their body.

For me, my issues with my body image stem from something kind of unexpected. I was born with a rare genetic skin condition called Netherton Syndrome, and it can be pretty brutal. Think eczema, but much, much worse. I, however, am lucky because I have not been affected as severely as some — and sometimes my skin can actually be totally "normal" looking. I even have hair — which is kind of an abnormality when it comes to Netherton. My twin sister and I like to joke that the disorder was split in half, because we haven't experienced it to horribly severe degrees. That being said, though, growing up with this difference has not been an easy ride. I was often red and flaky, and that was enough to gross out my peers — to be honest, I don't exactly blame them. I have my bad days, during which I have huge flare ups or infections that cause me to look like I have ringworm; but since growing up a bit (and discovering makeup), I can usually easily hide my condition. And yet, it is still something that makes me insecure to the core. If I ever have any rash showing, I feel like I'm crawling out my skin (pun intended).

But I am not trying to host a pity party here — I mean, maybe another time. What I am trying to say is simply that body insecurities aren't exclusive to a woman of a particular size or shape, or even just to women. My thing is my skin — for others it's something else. And I honestly think this is primarily because of the pressures that are put on all members of society to make us feel that we need to fit some kind of contrived definition of perfect (which is impossible), or that we have to be something we are not only to be accepted. You know that when a woman as stunning as Jennifer Lawrence is photoshopped (we've all seen the gifs), something with the world is seriously messed up. Can I get a hell yeah, people? Or when you read stories that the mega babe that is Chrissy Teigen was fired from a modeling gig with Forever 21 for reportedly being too fat, what are you supposed to think about yourself? How are girls and boys supposed to feel confident in their skin when they see people looking flawless and chiseled on the magazine covers?

The thing is, I look at the woman above and I truly see mega hotness and pure beauty. I mean, it's the outrageously gorgeous Candice Huffine. She has beautiful skin. She has beautiful arms. But more importantly, she looks comfortable in her skin. I love seeing this picture — not to mention all of the other photos featured on Vogue in a feature brilliantly entitled, "The Best Lingerie Comes in All Shapes and Sizes." These plus-size models — in all their voluptuous glory — remind me that we all have different (but no less beautiful) figures, and that said fact is what makes life a hell of a lot more fun. Having the same imagery to look at over and over again is boring, don't you think? This whole photo shoot screams, "Screw society and its expectations," because we are who we are, and we deserve to flaunt it.

I feel strongly about a little line from a vintage Beyonce song called "Check On It," in which she echoes this statement by singing,"If you got it flaunt it." And if I have ever seen somebody have it, it is in the deliciously full-figured women of this feature. I personally find these photos refreshing and empowering. I feel strength in seeing that Huffine and other plus-size models like Marquita Pring, Ashley Graham and Tara Lynn are strutting their stuff despite the fact that they may not meet the world's expectations, or be everyone's idea of "typical" beauty. It's likely that these women weren't always confident in their bodies growing up — especially having had essentially no fuller-figured women to look up to in the media. Except, perhaps, for Candice Huffine, who told New York Magazine that when she trekked to New York to try to get a modeling contract at 14, and was told to lose 15 pounds, she thought, "I was a size six, so I thought I was hot stuff. I was a freshman in high school, tight little body, thinking, 'I’m going to be a model.'" She also relayed that she is incredibly grateful she was signed with a plus-size contract right off the bat because she didn't want to fight and struggle with how her body was "meant to be." I feel that, girl.

I am so glad that these women are being highlighted in more renowned fashion magazines today, and not just being highlighted as the "plus-size" models in a group of straight-sized women. Huffine was also featured within the pages of W Magazine alongside straight-sized models without any emphasis on her size, or any note suggesting that she was somehow different to the other ladies. And this is how the industry should be. Even though plus-size isn't a dirty term, it would be amazing if — someday — all women's bodies could be celebrated together and recognized as equally beautiful. Huffine told New York Mag that she is over the division between the straight-sized world and the plus-sized world, saying, "We don’t need to be separate anymore. Hopefully it will get to the point where I could be the next CoverGirl, because who’s to say that just because I don’t have a 'perfect body' that I can’t be a spokesperson?" Sing it diva.

To put it simply, photos of plus women speak to my soul because skin condition aside (even though I am someone who usually feels a lot of love for my size 4 figure), it's not difficult for me to fall into feeling crappy that I am not 115 pounds. I think most people have had the experience of hearing a thinner friend of theirs complain about how "fat" they are and express their desires to lose weight. And because I like to make people feel awkward I usually say, "Well, if you think you're fat and you are approximately 20 pounds thinner than me, you must think I'm obese." I feel saddened, because whilst there is nothing wrong with having a body like Jessica Alba's, there is also absolutely nothing wrong with having a body like these other gorgeous women. When my mother tells me I'd be happier if I lost 10 pounds — because I think maybe I would be — I feel discouraged. But I am pushing back against the idea that only one type of body is beautiful. I am pushing back against the notion that "fat" is something we should cower away from and deem an impropriety.

So, in summation, seeing plus-size women owning their bodies — including our very own Marie Southard Ospina who rocks a low-rise bikini — makes me feel like belting out Aretha Franklin's "A Natural Woman" into my hair brush. OK, I don't brush my hair. And maybe that song is about how a man makes her feel; but I think you smarties get the picture! I love my body (flaws and all), and I love supermodel Candice Swanepoel's body, too. But there's another Candice in town, and her body is equally as scrumptious. I only hope that the world can open its eyes and realize that being plus-size isn't something to balk at. It's just another reminder that we are all different. And that those differences should be celebrated.