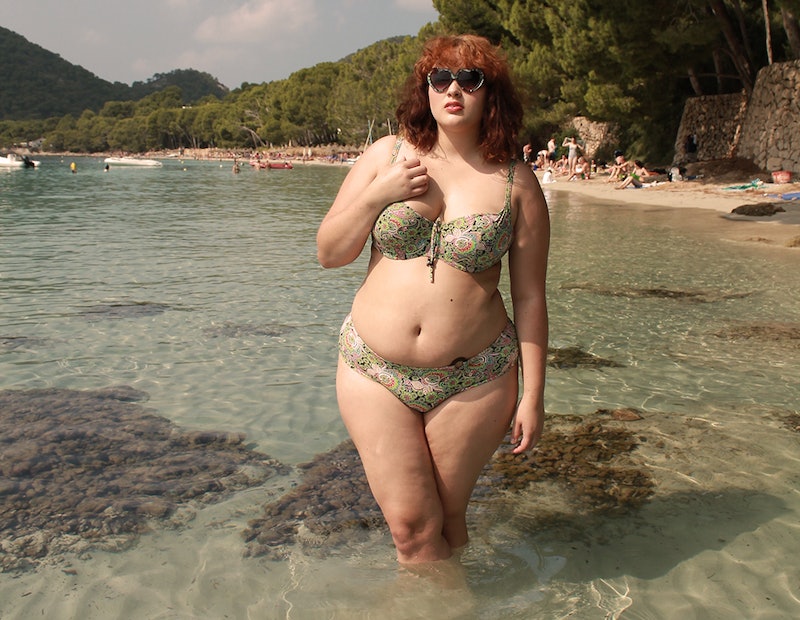 As a fat woman, there are several truths that have been ingrained into my psyche since the day my visible belly outline became impossible to conceal. Among them, the "fact" that fat women do not deserve to wear bodycon dresses or sexy lingerie. Furthermore, their sole goal when it comes to fashion should be to try their very best to not look fat. I'm talking about cultivating addictions to black dresses, wearing only loose-fitting tops and high-waisted trousers, and avoiding anything loud, revealing, or remotely interesting. Plus-size fashion rules indicate only solid prints and baggy things are to be purchased. And we must be grateful to these items, for they slim us down and make us more attractive (or better yet, less revolting) to those around us.

That fatphobia exists is no secret. Remember fat-shaming week? Or Karl Lagerfeld's entire existence? We live in a world, and at a time, where being fat is considered (in mainstream culture) not just distasteful or unattractive, but downright wrong. We wage wars on obesity without fully understanding the term. We brew hatred in our hearts and minds toward a physical characteristic needed to survive... because, let's face it, body fat is essential. We accuse plus-size bloggers, celebrities, and body-positive activists of encouraging unhealthy lifestyles, without acknowledging that health at every size is a real thing, and weight is not an automatic indicator of beauty, intelligence, or workout regimen. And as a result, we often end up disliking and harming our bodies, and criticizing anyone who doesn't fit the linear, preconceived ideologies of beauty.

That fatphobia exists is no secret, as I said. But that body-positive, feminist, girl power-y communities exist is no secret, either. For every person who is cruel enough — ignorant enough — to believe that you are unlovable or unattractive or less than human because of your figure, there will be at least one person to combat that mentality. Or, at least, that's what I'd like to think.

A few months back, I encountered writer and blogger Jenny Trout's Huffington Post article, "I Wore a Bikini and Nothing Happened." In it, she describes her decision to wear a bikini to the beach as a plus-size woman, and the ensuing reactions from those around her (predominantly negative, accusing, and falsely "caring" reactions, at that). But when she actually does it, nothing happens. No one flees in horror. No children weep. And nobody throws food at her head.

The thing is, I was surprised to read that nothing happened to Trout when she put on a two-piece and hit the sea. And I couldn't help but wonder whether the reason no one said or did anything was because her bikini was high-waisted. The fatkini movement, led by inspiring women such as Gabifresh and Tess Munster, is a beautiful, beautiful thing that encourages all women to realize that every body is a beach body. But most of the time, when you see a fatkini photo, you see a woman in a two-piece that still hides her tummy. Although beautiful and wonderfully vintage-inspired, these fatkinis often conceal the jiggliest bits of the body. So are they actually a fair test in gauging people's fatphobia?

I've never worn a low-rise bikini, not even when I was at my slimmest in high school or as a child. I've feared how vulnerable it would make me, much like I've feared purchasing plus-size lingerie for the same reason. But when I visited Mallorca, Spain, last week for my summer holiday, I decided to do something different. I purchased a plus-size, low-rise bikini (or "chunkini" as I like to call them) — one that would show off my belly, my back boobs, my cellulite, stretch marks, and other such presumed idiosyncrasies. And I took to Formentor, one of the beaches with the best balance of locals and tourists. And I walked. I just walked, up and down the beach, trying to look my most confident and gauging people's reactions along the way. I encountered several types of people, with both positive and negative reactions. And among them were these:

I had expected that the majority of the negative reactions to my body in a chunkini would come from people close to my age, and I wasn't wrong. What was somewhat shocking, though, was that groups of 20-somethings or teens didn't see me. The young people who stopped to look, point, and giggle were often paired in twos as part of a couple. The most obvious incident happened when a young guy saw me, visibly dropped his jaw, tried to conceal his laughter by moving his head slightly toward his girlfriend, whispering at her to look at me, and proceeding to ogle. Once he got her attention, they didn't even try to hide their staring, and he certainly didn't try to hide his laughter. But what is most interesting about this is that it foreshadowed the couples to come. Three young couples in total looked at me mockingly, and in each instance, it was the man who alerted the woman to my presence.

I don't know why I was so surprised. I guess because girl drama is no stranger to me, and when I did get bullied as a kid, it was primarily by other girls. In this case, I'm almost certain that the women wouldn't have even seen me had their partners not forced them to look. It was as though the men were so offended (especially that first one) by my rolls and wobbles that they just had to get someone to recoil in disgust by their side. It honestly felt like these guys were of the opinion that women (especially women on the beach) must only be there to delight their eyes, and if they didn't, well... they deserved to be laughed at.

In complete contrast to the young and oftentimes horrid couples were the middle-aged and elderly ones. I often got sweet smiles and clearly polite stares from these people. They seemed to be thinking "Doesn't she look cute," or "Way to go, girl." But that's obviously just my interpretation!

It was pretty encouraging to receive these welcome smiles. It gave me hope that people will outgrow their intolerance... though I know that this isn't always the case. It made me wonder whether, as we age, we become more accepting of all types of people and sort out our priorities.

There was, however, one exception. On our way back to the car, a middle-aged man told his kids (who looked about 7 or 8 years old), "Mira la vaca burra." This translates literally to "Look at the cow donkey," but both terms are often used to describe either fat or ignorant people in Spanish. The most disturbing part of this was that he seemed to be teaching his children to hate anyone who was different — to hate anyone he deemed worthy of ridicule. I don't doubt that fatphobia, along with any other phobia directed at groups of human beings, is often learned behavior. But seeing it in action threw me completely off guard, and was, in some senses, the most devastating part of the experiment.

Twice during the experiment, I noticed groups of girlfriends looking over at me. The benefit of being Latina and speaking fluent Spanish but being incredibly pale and pasty is that most Hispanic or Spanish people will assume I can't understand them. Two Mallorcan women paused to watch me go by, and I heard one of them mutter, "Mira la gorda," or "Look at the fat woman." But she didn't sound rude. Her tone of voice wasn't malicious or judgmental. It was inquisitive — surprised. She seemed genuinely taken aback that someone my size would wear a bikini in public, as though she, too, had been told her whole life that only women who work hard to stay thin deserve to wear such things. And it actually felt kind of good. I only hope it made her reevaluate these antiquated, boring, and non-essential rules about women, weight, and fashion.

Several times through the afternoon, I saw women my size and larger in two-pieces. Some were tankinis, others high-waisted. But the majority wore low-rise bikinis much like mine. I have to admit that I've never seen so many fat women wearing two-pieces on a public beach. Maybe I've been spending too much time at the wrong beaches (I did grow up on the Jersey Shore). But a handful of times, we'd catch sight of each other and we'd smile. Solidarity among women is a powerful thing, especially when it's women you just know can relate to what you're going through. I don't doubt that some of them got stares and assholic laughs from the opposite sex, just as I did. But that didn't stop them from enjoying themselves, from running around with their VBOs out and swimming in the crystal clear sea.

There were hundreds, if not thousands of people at Formentor on this day. Out of these thousands, only a handful seemed to notice me. Had I not been actively seeking them out with my partner (who kept at a reasonable distance to also observe people observing me), I might not have even noticed them. And that is kind of an amazing thing.

The young couples who pointed me out and laughed were far and few between. Though these instances seemed fueled by young, sexist, and misogynistic boys, we know that such people are not worth bothering with. Sometimes I cannot help but thank the fat on my body for providing me with a douche bag detector. Were I able to rewind the clock, the only person I might have confronted would be the man teaching his children to hate fat people. As depressing as it is to see parents bestowing such lessons unto their kids, it does make me wonder: If our hatred toward others can be learned, perhaps it can just as easily be unlearned.

Another note: As we were preparing to leave the beach, my partner got cold. The only thing available to wear was the dress I had had on that morning. Being the sort of guy he is, he didn't mind putting it on, prioritizing warmth over fashion or gender roles. And as we walked to the parking lot, he received more stares, laughs, and visible horror than I did in the whole day. One woman did a double take, looking at him so intently and with such a disgusted gaze that, for a moment, I thought she might vomit. This wasn't supposed to be part of the experiment, but it did make me remember that many people have it worse than us fatties. It can be hard to keep that in mind when you're being pointed at or bullied or told you are worthless. I don't know what people thought Patrick was doing. Perhaps they labeled him a cross-dresser or a transgender person, and that was enough to spark their interest and hatred.

Maybe people fear the unknown. Maybe people fear that which they cannot explain. But at the end of the day, that suggests there is nothing wrong with looking or being a certain way. Rather, it is our perceptions and close-mindedness toward the different, the obscure or the quirky that need to change. And in the meantime, the only way to normalize the "abnormal" is to embrace it — to wear the bikini if you want to, or dress in drag if you so please. People need to be confronted with their fears in order to change their views, but that can't happen if we — the ones who are different in some way — hide away and make ourselves invisible.

Alas, I leave you with this: