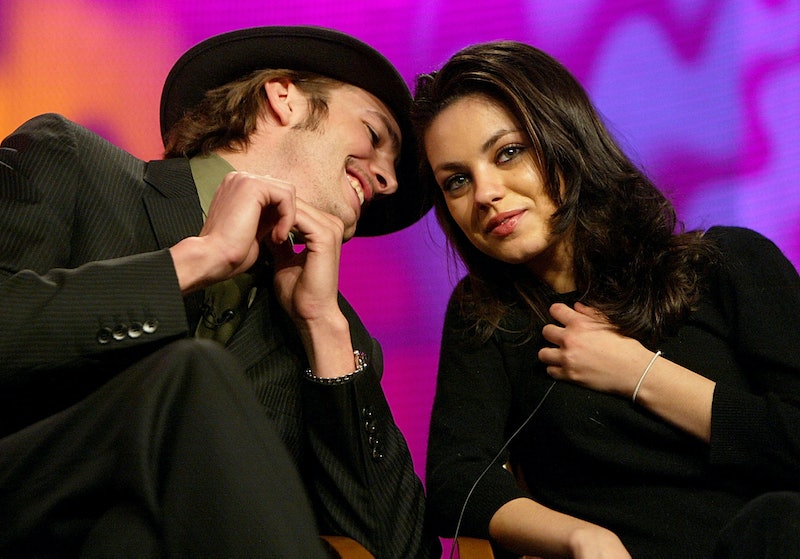 Ah, those tricky, mischievous ethereal spirits known as Ashton Kutcher and Mila Kunis. That '70s Show fans like myself might still be pretending that Jackie Burkhart and Steven Hyde never broke up, but, when Kutcher and Kunis started dating, it didn't take the world long to warm up to Jackie and Michael Kelso ending up together in real life despite not working out on the show. This is probably because Kunis and Kutcher are miles away from their on-screen counterparts and, in fact, are just downright adorable. Equally adorable is their recently born daughter, Wyatt Isabelle Kutcher, whose baby pictures are finally available on the Internet. Kutcher and Kunis tried to trick the world by burying Wyatt's picture among several other baby pictures on Kutcher's website, but they underestimated the power of social media.

Apparently, Kutcher and Kunis are the type of family to send around holiday cards to family and friends, because they enjoy being way too cute to handle. One of their holiday cards was allegedly uploaded onto the Internet and is now making its rounds on Twitter and social media, especially since it features the entire family — Wyatt Isabelle included — grinning and dressed up. As our first official look at the mysterious ball of cute that is Wyatt, it's everything I wanted and more.

The first photo is your average family portrait, featuring a smiling Kunis and Kutcher holding baby Wyatt close. Big-eyed, big-cheeked, and with a pretty full head of hair for such a little baby, Wyatt looks exactly like a perfect combination of her glamorous parents. The second photo is the truly priceless shot, featuring Kunis, Kutcher, and Wyatt all dressed up in full-body pig costumes. Kunis is laughing, Kutcher is making a funny face, and Wyatt looks as if she is lamenting the fact that her parents are such gigantic dorks. Like, come on, Mom and Dad. Do I really have to look at this baby photo for years to come, or any time I bring a boy home?

However, it's not just admiring these pictures that should make up the bulk of your time Friday morning. Am I the only one who is feverishly comparing the leaked family holiday photo to the baby pictures that Kutcher shared of Wyatt on his website? Yes, I am still trying to figure out which one was the real first picture of Wyatt. This mystery is consuming my entire being. Kutcher gave us no less than eight options (six that weren't of puppies or llamas), but comparing the ones on his site to these leaked family pictures brings me no closer to identifying the right baby. If I had to hazard a guess, I would say that the first picture we ever got to see of Wyatt was actually this one:

But that's just a very tentative guess based on the chubbiest of the chubby cheeks and the shape of the eyes. Sadly, I doubt Kunis and Kutcher are going to give us hints any time soon, but, maybe after Wyatt learns to walk, we'll get to see the entire family out and about. By that point, we'll have 500 paparazzi shots of Wyatt that will make photos of her so commonplace that they'll soon become boring. As for Wyatt herself, well, there are worse baby pictures to be featured in than one of yourself dressed like a little pink piglet. After all, her parents could have chosen to decorate their holiday card with the ever-dreaded bathtub shot.