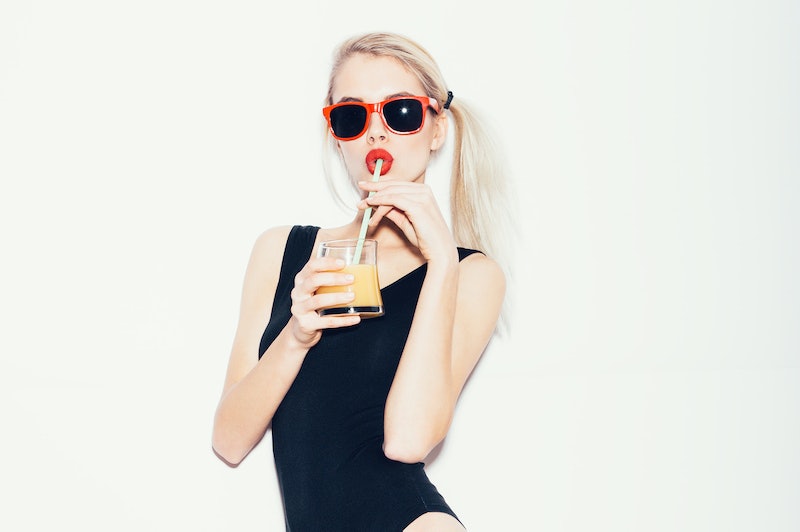 I will be clear from the start of this: I do drink alcohol sometimes. Because I have a tremendous amount of respect for the experience of being strictly sober, I want to let you know that's where I'm coming from, because that's a whole other thing, and I wouldn't presume to speak for the people who live that. I occasionally go out with close friends on Friday nights and live the How I Met Your Mother, millennial dream of eating an endless array of appetizers while imbibing. But the thing is, I've never really loved drinking. I've never especially looked forward to it; I was always just happy enough to have a few drinks when the opportunity came up, but never really sought it out. I waited until I was at least 20 years old before even trying my first sip of anything with alcohol in it.

Despite the fact that the first college I attended was labeled Playboy's Party School of the Year my freshman year, my not drinking was surprisingly a non-issue most of the time, which meant that the few times it was, I was blindsided. I remember one time, I was at a party with an upperclassman friend I'd known through most of high school, whom I trusted very dearly. He asked me to take a sip of his drink, and I said no, for a myriad of reasons (trusted dude or not, who asks someone that?!), chief among them: I just plain wasn't interested in drinking. This, apparently, was unacceptable to him.

He started to very publicly pressure me. In front of everyone, he called me out for having soda in my red Solo cup, loudly declaring that I was a goody-two shoes and was never going to enjoy my life if I was "so worried about what my mother thought," a concern that I'd never even expressed to him. It became very clear to me that he was drunk himself, and that somehow in this state it really, genuinely bothered him that I wouldn't even sip his drink. Over the next five minutes, it escalated to the point where everyone in the party was watching, and the only comfort I take from the weird social calling out of my sobriety in that moment is that he looked like a total jackass and embarrassed himself way more than he embarrassed me.

During the years since that incident, I've never again encountered quite such an extreme response to my not drinking—but the memory of has kept me on my toes. Which isn't to say that I don't still get pressuring questions from people when I choose not to drink. I do. All the time. "We thought we finally fixed you! What happened?!", etc. I'm pretty tired of hearing this stuff by now. So to clear the air and prevent future misunderstandings, these are all the things that non-drinking friends want their drinking friends to know:

We are not judging you

We are occasionally laughing at you if you get super wasted (we are only human, and it's always with you, not at you), but never judging. Just because we don't want to drink doesn't mean we think less of you for drinking.

Yes, we are still having a good time

We are not prudes

The word "prude" has got to be eliminated from the dictionary, if you ask me. It's just a way of shaming people for sticking to the convictions other people disagree with.

We can totally hang out in a bar

Bars aren't just for drinking! Bars are for making eyes at strangers and feeling like you're starring in your own rom-com and spinning around on swirly chairs. We can do all that sober, too. Plus, a lot of bars have cheese-based appetizers. Do you think we want to forego that?

We're not going to rat you out to...whomever

This is specifically true of people in college who are maaaaybe not quiiiiite 21: Just because we aren't drinking doesn't mean we're secretly recording you from a boob camera and sending the live feed to the cops. It's fine. You're fine. This is all fine.

We're actually really bummed when you don't invite us places

"But you wouldn't have had any fun—everyone was drinking!" I'm sorry, did someone drop a rock on your head? We are perfectly capable of having fun without alcohol in our bodies.

In college, I became quite famous for coming up with alternative embarrassing consequences for myself in games of Kings in lieu of taking a shot (and someone out there still has plenty of blackmail-worthy pictures to prove it. I live in constant fear).

We are not trying to be buzzkills

Do you hear us lecturing anyone? The only crime we are guilty of is sitting here, enjoying our cranberry juice, minding our own business. Get as drunk and silly as you want! If being in proximity to someone who isn't wasted is ruining your ability to have a good time, that seems way more like your issue than mine.

We aren't refusing to drink to please anyone but ourselves

Take all this "your mommy doesn't have to know" stuff home, please. We're all adults here. We make our own choices. Maybe I just don't like booze. Maybe this party is only serving a limited selection of drinks and I don't like anything they're offering and am not so desperate to get drunk that I'll sip on something I find gross. Maybe I'm super hungover from last night. Whatever the reason, it almost certainly has nothing to do with what our mother—or anyone else—thinks.

We are still really great wingmen/women

In fact, I'd argue that sober people are like the fairy godmothers of tipsy people in bars. I should start up a match-making service.

We are happy to be the sober driver, but it would be nice if someone else did it once in awhile

And it would be especially nice if everyone remembered to chip in for parking. Just saying.

Every now and then, we might want to drink, too

And if/when we do decide to have a drink (or two, or...), we'd appreciate it if you didn't make a Big Freaking Enormous Deal out of it—because it isn't.

If we seem uptight at any point, it's usually because we are worried about you

Every now and then, you might fall past the realm of "party drunk" to "absolutely tanked", and yes, as the only sober one, we might feel that the responsibility falls on us to make sure that you're okay. We do not begrudge you this because we love you, and we do not judge because stuff like this happens sometimes. But don't start saying we "need to loosen up" because even at your most drunk, you know what's really going on here. We're really just trying to make sure you don't fall down some stairs, or try to drive a car, or go home with someone regrettable. Let us help out, and thank us tomorrow with brunch.

We do not appreciate you belittling us

If I get called "adooooorable" for not drinking one more time, I will vomit fairy dust on someone.

Our reason for not drinking is ultimately none of your business

If we feel like talking about it, we will. If we don't...I mean, honestly, why do you care? You can question my motives when I start telling you when you can and cannot drink.

We absolutely love you for understanding all of the above

I know people shouldn't deserve a cookie for being merely reasonable and respectful towards their non-drinking friends, but I want to give all of you one anyway. You're the best. Hey, can you grab me a Diet Coke while you're at the bar?