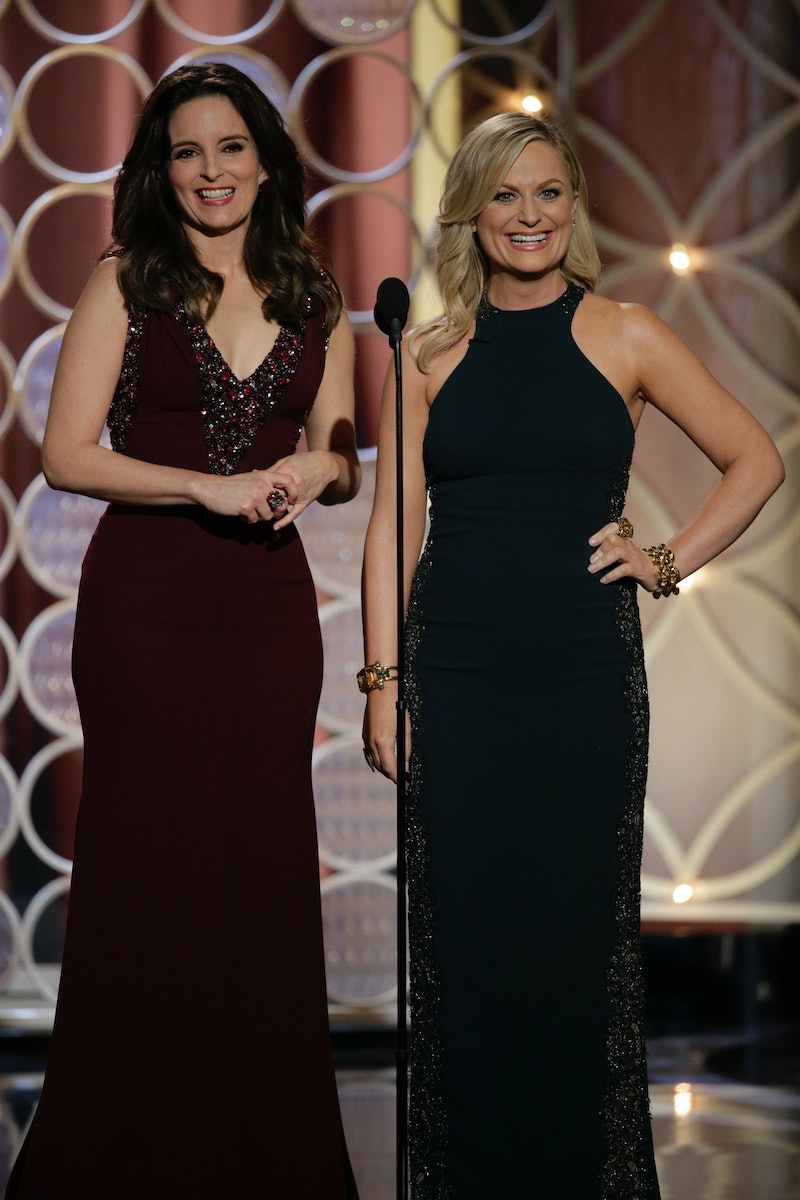 Award shows are strange. But, if anyone knows how to execute one, it's soon-to-be three-time Golden Globe hosts Tina Fey and Amy Poehler. This year is their last time hosting, unfortunately, but they promise to keep the conflict to a minimum — despite the fact that Fey and Poehler will make some Cosby jokes, as Fey explained in an interview with Access Hollywood.

Even hosts as seasoned as Fey and Poehler aren't immune to the award show hurdles. For instance, we have hosts, like these two comediennes, that are sometimes nominees. Then, there's the whole performing in front of an audience full of people who downed alcohol in preparation to gawked at by their friends, as a camera records their immediate reaction, in front of the entire country thing. And, lest we forget, it's basically an award show host rite of passage to tie in a few controversial jokes — as will be the case with Cosby — and the reception of these jokes is always... iffy. It's like Thanksgiving with your drunk uncle except no one is in a sweater and everyone's super beautiful.

The fact that the Saturday Night Live alum assures us there will be jokes about Cosby, shouldn't really come as a surprise. If you've caught Fey and Poehler hosting in the past, you know that they have a cutting and poignant way of using humor to call attention to problems in Hollywood, or society as a whole. They aren't afraid to ruffle feathers, but it's always done with a certain tact that makes it palatable.

In the 2014 opening monologue, Fey called out George Clooney for his habit of dating younger women. She also managed to laud McConaughey for his commitment to his role for Dallas Buyer's Club, alluding to his 45 pound weight loss, kidding (sort of) that that's what actresses have to do for every movie they're cast in.

And, in their 2013 monologue, Poehler and Fey joked about nearly everything, from drug problems to a lack of a certain city's "friendliness to outsiders." But really, the entire 8 minutes and 16 sections are worth watching to monitor all the subtle jabs and witty banter that prove that a Golden Globes hosted by these award winning actresses is an awards show full of self-awareness and societal consciousness.

More like this
Anya Taylor-Joy Might Be Engaged To Her Musician Beau
By Jack Irvin and Sophie McEvoy
'The Undeclared War' Spotlights The Real-Life Threat Of Cyber Attacks
By Maxine Harrison
What’s New On Netflix: 'Stranger Things' & 'Mean Girls'
By Arya Roshanian
Here’s Everything Coming To & Leaving Netflix In July
By Grace Wehniainen
Get Even More From Bustle — Sign Up For The Newsletter