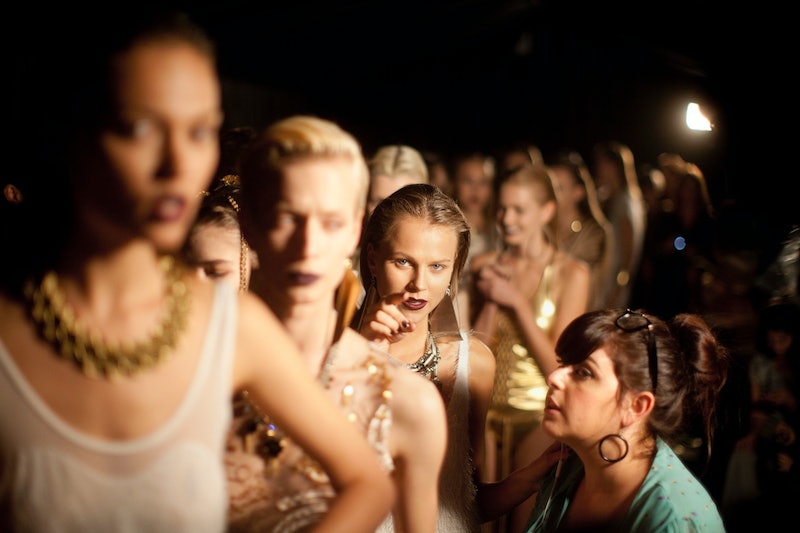 As of January 1, Israel has banned "underweight" models who have a BMI under 18.5 from the catwalk or appearing in advertisements. The strict 18.5 limit comes from the World Health Organization, which states that any person BMI under that is considered underweight or potentially malnourished. Furthermore, Israel instated ads must include a disclaimer if models are digitally altered in photographs.

Israeli gynecologist, lawyer, and politician Rachel Adatto who helped lead the creation of this law in Knesset, Israel's parliament, told The Daily Beast that she helped develop the law in response to an epidemic of eating disorders she was seeing.

"So many girls are idolizing these models and wanting to look like them," Adatto says.

This is a major move in the model world, which has been flooded with rumors of anorexia, rules of looking a certain way or weighing a certain amount to walk and be photographed and shirts that state things like this or "don't feed the models." But Israel is not the first to enact this kind of ban.

In 2006, after two models collapsed and died when they stepped off the runway, Brazil, India, Israel, and Uganda banned underweight models from the catwalk. Madrid Fashion Week strictly bans models who have a BMI below 18 and Milan's Fashion Week does not allow models to walk if they have a BMI below 18.5. The UK and US also have guidelines, but they are mostly subject to the designer's tastes. Models are required to turn in a medical report 3 months prior to the show.

In 2012, the editors of all 19 editions of Vogue Magazines pledged to no longer use models who are under the age of 16 and/or models with any visible signs of an eating disorder. This decision came after French Vogue used a 10-year-old model in their January issue.

These laws aren't getting praise from everyone, however. Some argue BMI is no longer a good measurement of health, some argue that there's a difference between eating disorder and disordered eating, and some say many models will be put out of work for a genetic trait they cannot control.

Today, BMI is the most common measure of health internationally, but more recent studies suggest having a higher BMI does not necessarily mean a person is obese. Likewise, having a lower BMI does not mean an individual is underweight, called the Obesity Paradox. And measurement standards of what is considered underweight and overweight changed constantly by the World Health Organization. Doctors now suggest asking patience how much they exercise and using more than one form of body fat-to-muscle ratio measurement.

Shai Avital, owner and CEO of Elite Israel, one of the country's most successful modeling agencies, deems the law unnecessary and says that while healthy, genetics may cause models to be smaller than the required BMI.

"The law disregards the fact that some models are thin due to genetics and nothing they would do would increase their BMI to the legally accepted level," Avital says. "This law ends now their careers. Israel is today the only country where a body weight legal control is in effect and this is not necessarily something to be proud of."

Recently, I shared my own experience struggling with a disordered relationship with food. And while it wasn't solely the fault of the models I saw when I refreshed Style.com during NYFW or from advertisements in a magazine, I definitely compared myself (and my torso, thighs, cheekbones, etc.) to those photos. I love what countries like Israel and magazines like Vogue are trying to show young women who see their publications. While maybe controversial, pledges like this are causing women and men to talk about their relationship with their body and their relationship with food — and that's so, so important.

More like this
I Have Eyebrow Alopecia – & Microblading Gave Me My Confidence Back
By Jessica Morgan
Olivia Munn Got Real About How Her Body Hasn’t “Snapped Back” Post-Pregnancy
By Stephanie Topacio Long
TikTokers With Eczema Are Opening Up About Topical Steroid Withdrawal
By Kui Mwai
13 Non-Toxic Sunscreens Under £35, So You Can Glow Responsibly
By Lauren Sharkey, Rebecca Fearn and Jessica Morgan
Get Even More From Bustle — Sign Up For The Newsletter