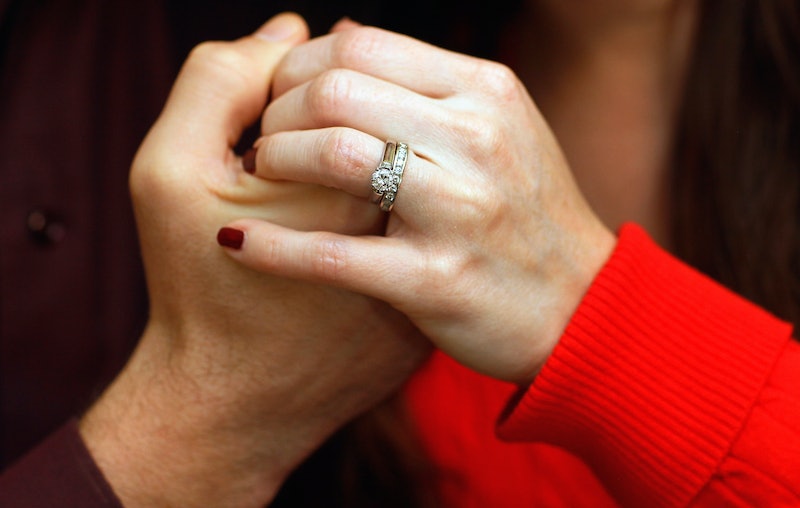 Following the holiday’s surge of "She said yes!" on social media feeds across the board, you may be questioning the motives of some of your acquaintances’ commitment to holy matrimony. But despite whatever your naysaying Baby Boomer parents may lead you to believe about today’s divorce rates, a recent study from the National Bureau of Economic Research finds more reasons to get married and remain married. “Social scientists have long known that married people tend to be happier,” points out the Times, “but they debate whether that is because marriage causes happiness or simply because happier people are more likely to get married.” However, this study was able to monitor the well-being of pre-marital couples, actually finding that both partners “are still more satisfied, suggesting a causal effect.”

Research published recently by TIME noted that nearly 25 percent of millennials will never get married. Presumably, this has a fair amount to do with factually inaccurate and outdated divorce statistics that have been around since as far back as the ’50s. In fact, notes the Huffington Post, divorce rates have dropped significantly since then, as primary reasons for wedding such as sex-in-wedlock or child rearing no longer suit the overall interests of people under 35 (because we’re all on that sin tip or whatever). And while divorce rates remain nearly constant in people with a maximum of a high school education or lower, divorce among couples with higher educations have plummeted substantially.

Marriage is primarily beneficial, reports the NBER study, as couples experience periods of increased stress or emotional strain, such as (drumroll please) midlife crises. So, contrary to whatever Hollywood has convinced you of regarding the extramarital whims of the lonely and aging, this research has actually confirmed the opposite. “[W]e find that the married have a less deep U-shape in life satisfaction across age groups than do the unmarried,” says the study, “indicating that marriage may help ease the causes of the mid-life dip in life satisfaction and that the benefits of marriage are unlikely to be short-lived.” Furthermore, it reports, “eases the middle-age dip in life evaluations for all regions except Sub-Saharan Africa.”

So, keeping in mind that your potential to become another statistic remains relatively high when making life decisions on the fly, we can now all calm our marital cynicism and proceed with our respective happily ever afters as we see fit.

More like this
Emily Ratajkowski & Pete Davidson's Astrological Compatibility, Revealed
By Nina Kahn
14 Easy Ways To Find Joy During The Holidays
By Carolyn Steber
This Company Will Send STI Tests Right To Your Door
By Lexi Inks
14 Underrated Date Ideas To Try With Your Partner
By Lexi Inks
Get Even More From Bustle — Sign Up For The Newsletter