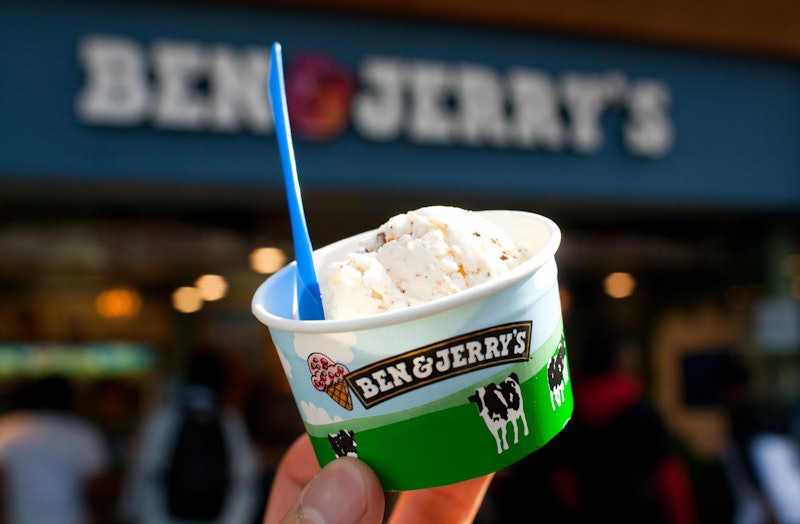 Although I enjoy Reddit’s r/IAMA sub quite a bit, I can usually take or leave the celebrity AMAs (“Ask Me Anythings,” for the uninitiated). A lot of the time, they end up being a lot less interesting than you’d hope — but happily, this was definitely not the case with Ben Cohen and Jerry Greenfield of beloved ice cream brand Ben & Jerry’s AMA yesterday. Chock full of fun facts about your favorite flavors, sage business advice, and words of wisdom, it’s an absolutely delightful read — even if you have to sift through many of thousands of comments to unearth some of the best questions and answers.

This wasn’t the first time Ben had made an appearance on r/IAMA; he did one all by his lonesome about a year and a half ago. He brought Jerry with him this time, though, which made for a doubly entertaining situation. Throughout the course of their Q&A session, they answered just about any pressing question you’ve ever had about them, their ice cream, and more. For those of you who don't have the time or the inclination to wade through the 6,000-plus comments that make up the thread, here are what I think are the 12 best questions and their enlightening answers; for more, go check out the AMA itself. It's worth reading, and not just because of all the fun ice cream trivia. I promise.

1. Why did my favorite flavor get buried in the Flavor Graveyard?

So, pretty much for the reason you’d expect. They do have a business to run, after all, no matter how much you’re still mourning the loss of Wavy Gravy. Redditor Kemuel, however, came up with an amazing suggestion:

An thought to which our heroic ice cream makers seem quite amenable, indeed:

2. Who would win in an ice cream-eating fight, Ben or Jerry?

At least they’re both in agreement.

3. If Ben and Jerry’s is based in Vermont, why isn’t there a maple syrup-flavored ice cream?

Which isn’t to say that absolutely no one ever ate it; added Ben:

I don’t know why I find that random factoid so hilarious… but I do. I really, really do.

4. What’s the deal with the fish in Phish Food?

Before we can delve into exactly what the answer is, we must first understand the question itself. Redditor WheatGerm42 posed probably my favorite Q in the entire Q&A:

OMG. YOU ARE TOTALLY RIGHT, WHEATGERM42. Ben’s answer doesn’t entirely satisfy the existential quandary to which the issue of “chocolatey fish” gives rise… but he does note something incredibly important about those fish:

They smile as you eat them. You monster.

5. What’s the best reaction you’ve ever gotten to your ice cream?

Fingers crossed they’re actually working on this one right this very minute.

7. How did Stephen Colbert end up on the carton for Americone Dream?

Speaking of: Does anyone else remember this flavor initially debuting as “Coney Island Dream Cone?” I have an incredibly vague memory of buying it under that name from the Key Foods in Morningside Heights sometime during college (so, probably about 10 years ago. Is my brain making that up, or did it actually happen? I must know!

I love the idea of Cores, but I’ve never actually tried them. Time for me to get my arse in gear on that, perhaps?

9. What do you do with “imperfect” ice cream?

I would argue that there’s no such thing as imperfect ice cream, but maybe that’s just me.

11. Where do the flavor names come from?

Sitting around and coming up with the weirdest ice cream flavor names you can think of sounds like the best job ever.

This is actually the most thought-provoking answer they give in the entire AMA. Jerry remarked in response to the question (which actually was “How is it you’re so amazing?), “The further away from where we live in Vermont, the more amazing we seem. The closer you are to us… things come into a little sharper focus.” Ben added, “It’s true, Nobody is a prophet in their own hometown. The question is WHY are we amazing? How are we amazing? Who thinks we’re amazing?” Then Jerry let loose with the gem screengrabbed here. I feel like that philosophy — the whole “use your powers for the forces of good” thing — is something we could all stand to follow a little more closely, no matter where those powers come from. Maybe the world would be a better place if we did.

More like this
Starbucks Released New Menu Items For The Summer
By Emma Garza
A Beginner's Guide To Drinking Whiskey
By Alexis Morillo
What Is A “Softboy?” The TikTok Term & Aesthetic, Explained
By Courtney Young
Why Are TikTokers Slapping Each Other With Tortillas?
By Courtney Young
Get Even More From Bustle — Sign Up For The Newsletter