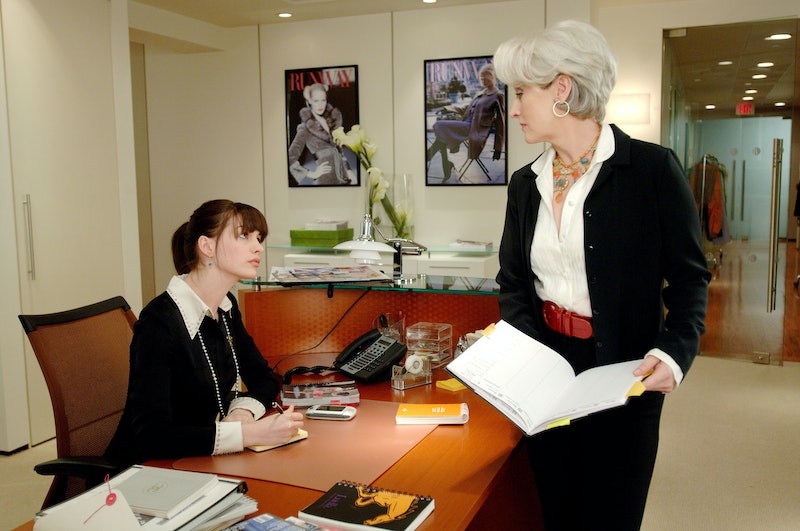 You worked so very, very hard to land your job — going on dozens of interviews, taking on months or even years of unpaid internships, suffering through hundreds of hours of your parents telling you to give up and "go to dental school" — that it can be tough to imagine that eventually, you might want to leave your job. But just like that dude you once met at a bar who told you that he was Katy Perry's manager but actually just managed a tanning salon near the airport, many jobs reveal themselves over time to be way less appealing than they had initially appeared. Your dream job may actually be a nightmare job, or even just a "meh" job, and knowing when to leave it might be necessary for your professional and personal success.

If you figure this out on your own, kudos to you. You have a great head on your shoulders, and should probably be out there curing cancer instead of dicking off on the Internet. But for a lot of us, it can be tough to figure out when it's time to switch jobs — especially because the emotional muck of a bad job can suck your motivation, and make it hard to think clearly about your future, (or anything else, for that matter).

So how can you tell when it's time to brush up your resume, delete all those Instagram pictures of you doing beer bongs, and search for a new job? There's no one way to tell, but the 13 signs below are some pretty good indicators that it might be time to update your LinkedIn profile.

You Loathe Your Boss

Even if every other aspect of your job is great — you're working on engaging projects, you have cool coworkers, plus you have access to all the Edible Arrangements you can eat — nothing can make up for a jag-off boss, whose behavior and demands that you bring them a latte that isn't so f*cking foamy this time will set the tone of your work days and work life.

Beware of coworkers and others who tell you that suffering through the torment of a bad boss is simply part of the "hazing" process while climbing the ladder to your dream career — an unsupportive boss early on will actually prevent you from developing the confidence and making the kind of connections you'll need to move ahead.

You're Beyond Bored With Your Assignments

At any given moment in your work day, are you overseeing 11 Gchat sessions, Snapchatting with five different people, and reading a Reddit thread about Bigfoot, because it only takes about 15 minutes of your day to accomplish your actual work? On paper, having no responsibilities may sound like a dream job; but in reality, a job that requires almost nothing of you gets real tiring, real fast (and is generally not a gateway to any better kind of work).

Stepping out of your office and into the Hale & Hearty next door feels like that moment in The Wizard of Oz where everything switches to color: people are smiling and chatting, music is playing, no one is weeping in a supply closet. It feels like paradise! You spend 15 minutes selecting the perfect bottled water, merely to soak up the ambiance. If your office has such terrible vibes that standing around a fast food restaurant for 30 minutes feels like an impromptu trip to Ibiza, you're in danger, girl, and it's time to consider moving on.

The people we spend the most time with are often more astute observers of our emotional state than we are. While we think we just happen to be in a bad mood today because the copy machine broke, your friends notice that actually, you have been complaining non-stop about your job every single time you've seen them for the past five months. Don't get defensive if they mention it — most likely, they're not complaining about your repetitive conversation topics, they're just genuinely worried about you spending 40+ hours a week doing something you so clearly loathe.

You're Not Being Given Any New Responsibilities

I'm not just talking promotions and raises, which can take a while to snag. I am talking about a job where nobody is interested in encouraging your growth as an employee, or trusting you with more advanced or complicated tasks, or taking your perspective on problems seriously. You're being given more work to do, but it's busy work — stuff that doesn't help you move along or grow in your position at the company, stuff that just has to get done by "someone," and you happen to be that "someone." No matter what industry you're in, your time is worth more than that.

Your office will definitely have some idiots. But it is statistically impossible for your office to be composed of 100 percent idiots. When you begin to feel a schmear of contempt for everyone that you work with, and shun all contact with them, it's not a sign that the world is becoming dumber or that you need to move to that shack in the mountains like you've always threatened — it's a sign that your frustration and unhappiness with your job is starting to color everything.

You're Angry All the Time

You have yet another crappy day at work, and take your frustrated feelings home with you, where you take them out on your partner, or your roommate, or the guy who said that a six pack counted as a single item in the "12 items or less" lane at the grocery store. You didn't used to be someone who'd start a screaming fight with a 13-year-old who coughed too loudly during the previews at the movies... but your anger at your job is now ruining your personal life.

You Always Dread Waking Up in the Morning

You're lethargic, exhausted, and barely able to summon the energy to do anything after work but lie in a nest of blankets on your couch, watch Sherlock, and attempt to fall asleep at 7 p.m. You didn't used to feel like this, but now, you can barely get it together to put on pants when you open the door to get your eighth Seamless delivery of the week. If you dread waking up every morning, it's not just because you're "not a morning person." It's because you're depressed, and the bleak state of your work life is bleeding into the rest of your life.

You might also be partying too much or obsessively Tindering to kill the pain, too. But spending money — on clothes, expensive dinners, and other things that make you feel good in the moment — is a classic "vicious cycle" that comes with life at a bad job. When you get hooked on getting yourself $6 lattes and a little Mod Cloth pick-me-up every week, you start to think that quitting would be a bad idea, because you really need this money... so that you can keep buying expensive stuff... to keep killing the pain you feel from working at your terrible job.

You're Actually Beginning to Feel Physically Sick From Stress

Are you having trouble getting to sleep or staying asleep? Have you developed weird stomach problems out of nowhere? Have you been fighting off ten thousand colds this winter? The chronic stress from coping with a job you hate can wear down your immune system. If you used to be healthy as an ox, but are now as sickly as a lab rat with an ear growing out of its back, you might genuinely be rotting from the inside out because of how crappy your job is.

You Just Don't Care About Any of the Work You Do

You're totally uninvested in the outcome of any of your projects, your coworkers' projects, or your company, and you're continually surprised when any of your coworkers express their own investment in how the company does. You thought everyone just showed up in this office, felt nothing for eight hours, and then went home.

You faintly remember caring about something... once... maybe in college? But it feels like a distant memory now. This attitude won't just have professional ramifications for you down the line — it's a bummer of a way to live, especially if you've convinced yourself that you couldn't possibly find a job you'd actually care about.

I refer to this as "going full Fight Club." You start to imagine that the only answer to your work woes is something really dramatic — devoting your life to anarchist activism, opening a tempeh-based food truck, becoming a professional tree stump whittler. Again, nothing wrong with any of these pursuits — but if they're not actually things you're interested in, and merely the only ways you can imagine getting out of your work rut, then it might be time to examine some less drastic options, like getting a new job.

You Can't Imagine Anything Better

When the thought of getting out of bed to go to work in the morning makes you want to immediately go back to bed, but you believe there's nothing better out there, no chance that you could get a better job, or that any other job would probably be as bad or worse... that's the biggest sign that you need to change jobs.

You are experiencing full-on job-related depression, the kind that makes you think that this is it for you, for the rest of your life. But it isn't. It really isn't. It might take a few tries, but there is a job out there that will make you happy, and you can find it. Don't let the bad job bastards grind you down.