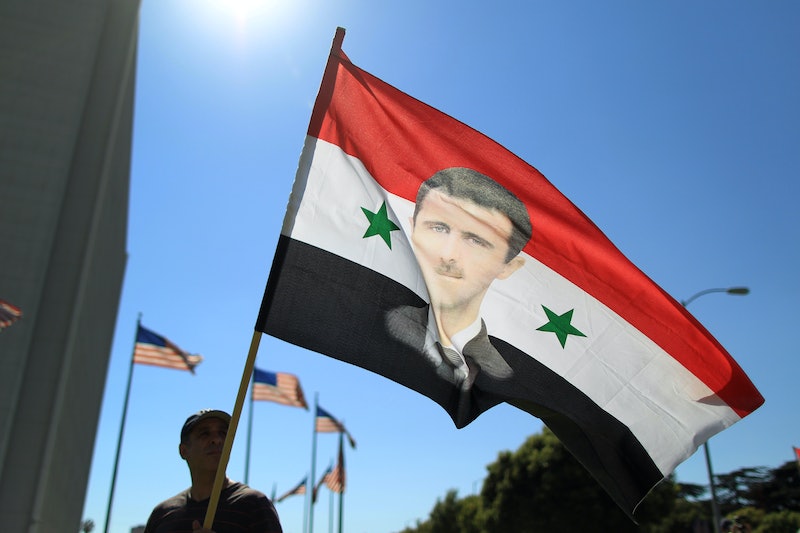 Details continue to emerge about more Syrian rebel groups abandoning the opposition's political leaders-in-exile in favor of joining a coalition loyal to al-Qaeda. The New York Times reports that 11 groups signed the pledge of loyalty this week, including "three groups aligned with the Western-backed opposition’s Supreme Military Council."

“We found it was time to announce publicly and clearly what we are after, which is Shariah law for the country and to convey a message to the opposition coalition that it has been three years and they have never done any good for the Syrian uprising and the people suffering inside,” said a spokesman for the Al Tawhid Brigade, one of the sponsors. (Tawhid is an Islamic term for the unicity of God.)

Other opposition groups, like the Jabhat al-Nusra, had previously announced their loyalty to al Qaeda. The United States now considers the group a terrorist organization.

One of the options for Western intervention in the Syrian Civil War, which has claimed over 100,000 lives, has been to aid rebel groups against Bashar al-Assad's government. But as Bustle reported earlier this month, Syrian rebels have been plagued by an influx of rebel fighters from abroad fighting for the cause of a greater global jihad:

What brews underneath, it seems, is a rather un-Syrian Holy War, and it bears little resemblance to the initial uprising. The original elements of the Syrian uprising are less and less visible. Instead, the rebel-controlled areas are dominated by fighters from outside Syria, [Professor Rashid] Khalidi says.

This situation is not unique to Syria. Arab Spring revolts against authoritarian leaders have been co-opted by Islamist groups everywhere from Tunisia to Egypt. The Islamist groups had often been marginalized from the political process for decades, during which they built massive social organizations. When they were finally permitted to enter the electoral process, they were able to quickly mobilize and establish a political leadership — like the Muslim Brotherhood did in Egypt.

Meanwhile, the people who initiated the Arab Spring revolts — who were largely motivated by socioeconomic rather than religious grievances — were more often than not unable to translate protest power into political machinery. In Tunisia, whose electoral process made it easy to register new political parties, the secular opposition splintered into many groups getting tiny fractions of the vote each.

But the situation in Syria is very different. While groups like the Muslim Brotherhood are motivated in part by religious ideology, they have largely accepted the electoral process as a means for implementing their vision of an Islamic state. In contrast, al Qaeda and affiliated groups practice a much more radical form of Islamism. Their growing control of the Syrian opposition groups means that there is increasingly little hope for any democratic governance after the war.