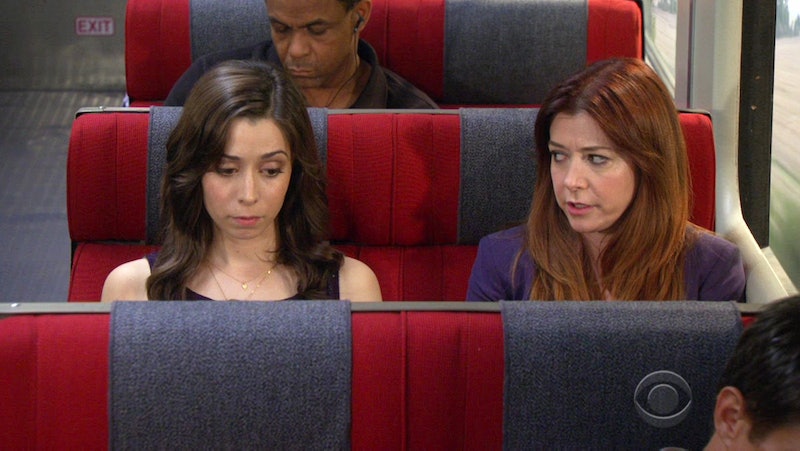 I am a nice person... sometimes. Other times, I am not so nice. If you have ever seen me behind the wheel of a motor vehicle, staking my spot out at six in the morning for an audition line, or watching Dance Moms over my sister's shoulder, you will know that, in fact, I am capable of being a truly nasty, borderline-horrible person. If we're being honest, we all are varying degrees of terrible at times, but I have one thing going for me that throws a wrench into that dynamic: I look like a "nice girl". Because even though I'm as awful as any other average person out there, people make wild assumptions about my personality based solely on the benign nature of my appearance — and it's incredibly annoying.

By "nice girl," I mean that when my face is in repose, I look friendly and approachable. I have also been told that I look about as threatening as a stuffed animal. Over the years, I have come to the conclusion that my face is symmetrical enough to be pleasant, but not so astoundingly great that people are intimidated by my ~*~BeAuTy~*~. I shouldn't complain too much; life could have dealt me a much more unfair hand than looking "nice". But still, every now and then, there are phenomenons us "nice" looking people experience that we could do without:

People are always asking you to watch their stuff

I have never sat down in a coffee shop and not been asked by a stranger within an hour if I could "just look after their laptop for a sec" while they go pee. They assume, because I look nice, that I won't steal their stuff. I AM JUST AS LIKELY TO STEAL IT AS ANYONE ELSE. I mean, I'm not going to steal anything from a stranger, but it's a pretty wild assumption for everyone to automatically trust me just because I don't have a bitchy face.

I COULD BE A MURDERER. WHY DID YOU JUST HAND ME YOUR BABY, AND WHERE ARE YOU GOING? (Perks: I did land two steady babysitting gigs when this happened in high school).

People always question whether or not you "belong" somewhere

Spend 5 minutes in a dive bar and it's all, "What's a nice girl like you doing in a joint like this?" Uh, ignoring you, sir.

If it's someone's job to annoy people, they will annoy you most of all. I assume it's because they think people who "look nice" are less likely to angrily assert their desire to be left alone, which is not a safe assumption to make.

Nobody ever asks before they steal food off your plate

Just because I look like Pollyanna doesn't mean I won't stab you with this fork.

Men will abundantly manspread next to you on public transport

Nice-faced people get very little respect for their personal space. Again, it's the assumption that we are inherently passive and won't assert ourselves like everyone else. The truth? People encroaching on us like that all the time based on the belief that we will be all sweet and chill about it actually ends up making us more likely to stand up for ourselves — because if we didn't, we would basically never get a seat.

Also, you are mansplained to all the time

In the worst job I ever had, my boss decided that instead of actually explaining what our client was looking for, he should just use an analogy involving make-up ads from Seventeen magazine. #BYEFELICIA. Just because I look "nice" doesn't mean I'm a simple-minded ditz.

Party people always underestimate you in Cards Against Humanity

Nobody ever takes you seriously at the beginning of job interviews

YOU DON'T THINK I HAVE THE GUTS TO REAR END YOU, MA'AM?! OK, I'm definitely not going to do that. But still, it's insane when people will look over in your window, see a sweet-faced lady behind the wheel, and decide you are someone who can easily be manhandled on the roadway. It happens all the time.

Everyone assumes you are religious

This is a weird one, but ask anyone with a "nice face" and they'll tell you how many times people have randomly asked them things like "which church they go to" based on absolutely zero indication that they are religiously-inclined at all. I think this is mostly because our faces looks like someone ripped them out of Catholic school admissions pamphlets.

They are strangely hesitant to curse around you

Whenever someone uses PG-13 language for the first time in front of me, they genuinely do this little Betty Boop gasp thing like my fragile little baby elephant ears cannot handle it. Do you think my pleasant countenance means I've been living in a Disney movie for my entire life? FTS.

And then they get really shocked when you curse

Look, I'm sorry I was a jerk, but let's not blow my tiny lapse in good manners out of proportion just because it goes against some unfairly pristine image you created of me in your head. I'm as allowed to slip up from time to time as anyone else.

Some men very uncomfortably fetishize you

Once I was making out with a guy in his car (as you do) and he unceremoniously grabbed my boob. Since we were doing the whole "steamy car make-out" thing, I was totally down with his sliding to second base — until he was like, "Hah, I knew the nice girl thing was just an act." *cue the record scratch* So let me get this straight, bro: Not only do you decide based on my physical appearance that I'm intentionally presenting myself as someone who wouldn't enjoy being consensually groped, but when I defy the stereotype you projected onto me, you accuse me of being fake? Yeah, we're done here.

You feel obligated to live up to your "nice girl" expectations

Because even though it's not fair for people to assume things about you because of your "nice" face, you still can't help but internalize some of the expectations associated with that. For some reason, the terrible things you do are made exponentially more awful by the fact that you look "nice", and I just would rather truly be that nice sometimes.

Just kidding. You're very content to be the complex, awesome person you are. Let them keep making assumptions — you'll continue to enjoy shocking everyone who underestimates you.

More like this
The 3 Dating Apps Queer Women & Nonbinary Folks Actually Like
By Emma Carey
Melony & Gia Prove That Couples Who Grow Together, Stay Together
By Jessica Morgan
Juneteenth Is Now A Federal Holiday — Here's What That Means
By Lani Seelinger and Syeda Khaula Saad
How to Delete (or Pause) Your Hinge Account
By Emma Carey
Get Even More From Bustle — Sign Up For The Newsletter