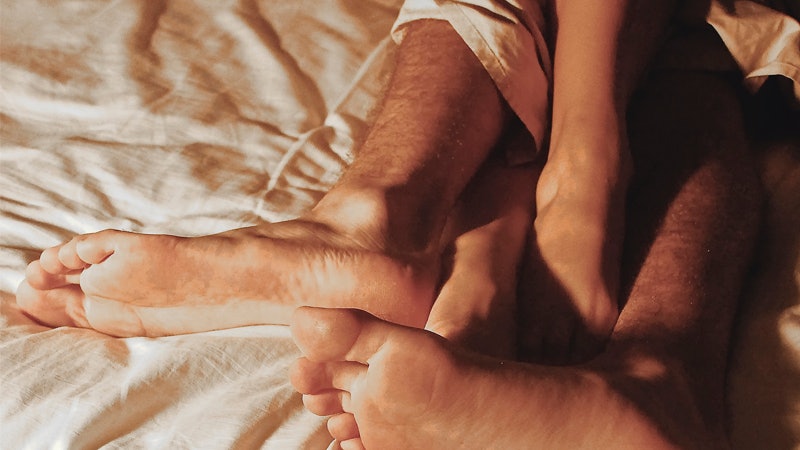 I've always been of the opinion that when it comes to sex, you shouldn't walk into any situation with too many expectations. That said, it's entirely healthy, constructive, and honestly really hot when someone goes into sex knowing what gets them off. The only downside to bedding a lady that awesome? She's also very likely to know what turns her off. Even the most adventurous, adaptable, and forgiving woman is still going to have a list of a few sexual faux pas that will put a hasty end to pretty much any romp.

Confession: I feel a little bad about even giving you guys this list. I'm not here to give you gentle humans of the Internet any more performance anxiety than you probably already have. Do yourself a favor and just enjoy these 64 things as fun, vaguely voyeuristic tidbits, not set-in-stone rules for sexual engagement. For every woman on this list who emphatically decries a bedroom move, there are probably ten women reading it who absolutely love that thing. The real takeaway from this list isn't "Here's what to do and what not to do" ― it's "Try like hell to be aware of every partner you have, because everyone likes different shit."

I left out a lot of the obvious DON'Ts because, well, they're obvious. Basically, don't ever attempt to cajole someone into doing something they're not into ― or much worse, actually forego the persuasion entirely and try to physically force them to do it. It's alarming how many women who contributed to this post listed "deal breakers" that played dangerously close to the line of consent.

So if you read nothing else here (though you will, because the rest of these are mostly very funny, told by women who are themselves very funny, and wonderfully candid about their sexual preferences and experiences, so why wouldn't you want to read it?), read this: People like to feel that you care about what they like. They want to feel respected. They want to be given the chance to say yes, and they want to feel very clearly heard when they don't say yes. And "not saying no" does not equal "yes" — repeat that to yourself like a mantra. Write that shit on your mirror while you're getting ready for a date. Tattoo it on your goddamn knees so that you can read it every time you look at your sex parts. Nearly everything else is negotiable and/or forgivable.

Buuuuuut maybe also don't do these things (at least, not with these women).

1. "I don't like it when they tell me to rub my clit while they fuck me. It's my clit. I know when it needs more attention. I don't need your permission to do so, bro. My clit and I go way back, longer than you and I do. I know what she needs." - Ella, 29

2. "Saying 'please' after I've already said no makes you seem like a desperate child. And I don't fuck children." - Kara, 31

5. "Lack of passion. If you're kissing me like you kiss your mom and are being gentle with me as if I'm about to break, it's not happening." - Jessica, 26

7. "A guy not being able to get hard. I know it happens, and usually isn't anyone's fault, but I can't help blaming myself in the back of my head. Also, sticking a dry finger up my butt without warning ..." - Morgan, 22

14. "Biting hard, to the point where I have bruises all over my body the next day. [Also] debating about whether or not to put on a condom. Shut up and put on the condom." - Allie, 28

15. "Unnecessary, stupid lip movements when going down. Acting like I somehow owe whatever sex we're having." - Ella, 22

17. "Being super rough and thinking they're doing a great job [when] actually [they] can't even find my clit." - Danielle, 21

22. "Asking me if things are going well over and over again. Like, you should be able to tell. Come on now. Oh, and anyone trying to get me to call them 'daddy.'" - Laura, 23

23. "I really dislike when they 'finger' you with their tongue while going down! Like, I don't need your little tongue dick penetrating me!" - Caroline, 29

24. "I would say spitting on my vagina, not finding my clit, using teeth down below, and not getting hard and then throwing an insecure temper tantrum about it are my top 'Bye, Felipe' moves." - Brianna, 23

25. "Lack of confidence [resulting in] failure to maintain their erection. You can only try to help out so much before you realize it's not going to happen because they're insecure. Especially if it's because they say you're intimidating." - Ellen, 26

26. "Trying to penetrate the back door when I've been clear about that not happening. I said no!" - Monica, 27

27. "[Trying to] just go at it with no foreplay and wanting to have sex all over the room, changing positions every two seconds. Why? It's not a race, bro." - Cath, 24

29. "I dated a guy who wanted to have sex for three+ hours and then didn't understand why extra lubrication was needed. Or why I did not want to get on top at hour three, because I was exhausted." - Lola, 23

31. "Falling asleep while going down on me, aka [being] too drunk to continue. Pass out before or after [if you want], but during? Byeeeee!" - Bridget, 28

32. "Not knowing how to do doggy style, which is one of my favorites. I'll say to get me in doggy, and then I'll get in position and he'll lay on top of my back, not knowing how to get his dick in me." - Mary, 27

36. "Any sort of comparison to past partners. Even if it's an attempted compliment, it just throws me. 'You have the best vagina I've ever seen.' Ummm ... thanks? Get off me." - Taylor, 29

41. "[Saying] 'How does it feel? Tell me how it feels.' IT FEELS LIKE A DICK IS INSIDE OF MY VAGINA, I DON'T KNOW, CAN YOU FUCKING NOT?! I knew my SO was gonna be the one I'd marry when he just shut the fuck up, went to work, and only said words [when he was] telling me how hot I was while we got down." - Amber, 29

46. "Mirror sex can be hot and steamy, but I once had a partner who was glued to the mirror, and was dramatically performing while watching himself ... I finished, laughed, and left." - Lisa, 25

48. "Guys who stare at you so hard when they're going down on you. I am all for eye contact and you checking me out, but don't STARE at me nonstop without blinking like you're trying to steal my soul." - Kate, 25

51. "CLIP YOUR NAILS before you try to finger me, please. My vagina does not need to be scratched." - Meena, 25

52. "When you ask a guy if he has a condom, and he says 'Yes,' but just keeps rubbing himself against you with no penetration in sight." - Patty, 21

53. "Apologizing for their penis size, or fishing for penis compliments." - Mary Kate, 30

54. "Rabbit sex ― like it's a race with himself. I know some girls like it, but it's an absolute deal breaker for me to feel like my vagina is about to get a rug burn." - Masha, 27

55. "When the dirty talk is cheesy, and doesn't sound spontaneous and natural but more rehearsed and corny. WHO ARE YOU?! Also, when you tell them to pull your hair and they literally yank it with all their might." - Jamie, 24

56. "Trying to force dirty talk after I've already made it clear that I feel awkward doing it. Also, when they ask, 'Did you come?' If you have to ask, the answer is NO." - Erica, 30

57. "One guy had me rub around his penis for a really long time, and kept checking his phone every few minutes." -Donna, 29

59. "What I call 'dead fish missionary'. Where they just lay on you with all their weight until the end, and then roll over. What in the world is that all about? Are you tired, bro?" - Sara, 26

62. "Thrusting like a baby jackhammer. And you can tell he actually thinks he is doing something right. Meanwhile, I am legitimately confused and uncomfortable." - Aurelia, 29

64. "When she pushes all of our boobs together like it's a two-way mammogram or something. Like, I love boobs. I love your boobs, and I especially love my boobs. Please stop trying to suffocate them." - Jenny, 28