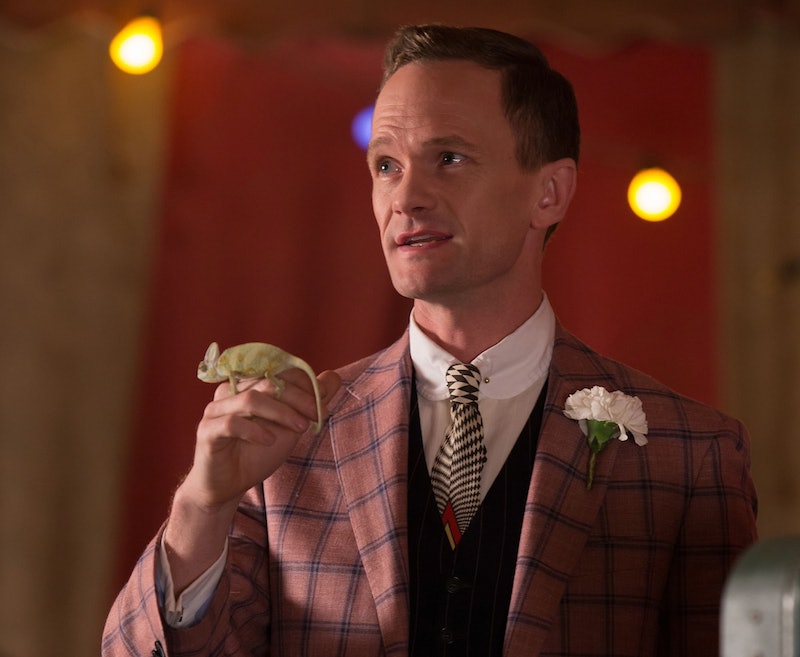 With the introduction of Neil Patrick Harris's character Chester Creb on American Horror Story: Freak Show in the Jan. 7 episode, Dandy has competition for the love of conjoined twins Bette and Dot. And he also now has competition for being the creepiest kid on the block — so in the battle of Chester versus Dandy on AHS, who wins? Both men are suffering from severe mental illness (seriously, can we get some legit doctors up in this freak show?), but the way the childlike men deal with their problems makes it a bit hard to be empathetic. (Yet, somehow I severely pity Chester. Don't get me wrong, he made me feel all sorts of uncomfortable in both of the sex scenes he was involved in, but he just seems like a damaged, little soul. Damn you, NPH and your charisma!) Anyway, the freak show, the state of Florida, and the whole goddamn world are too small for both of these men to exist in it. But who needs to go first?

Twisty the Clown used to the be the freakiest person on AHS: Freak Show. Although his backstory exposed the fact that he wasn't always a murderer, I could not handle his mask and scalp hat. At all. Since Twisty died, Dandy did not hesitate in taking over the creepy throne. But now he has a worthy advisory in the form of Chester. Let the creepy battle begin!

I think this one has to go to self-aware Dandy. His evilness is premeditated and he has a huge body count of people he has murdered. I honestly don't think Chester even believes that he killed his wife and her female lover (he thinks his ventriloquist dummy Marjorie did it, which I realize sounds insane — because it is). Dandy gets pleasure in being evil — while (from what we've see so far), Chester does not appear to do so. Chester seems legitimately haunted by his dark past and his obsession with Marjorie (who he just can't quit).

For similar reasons to the last category, Chester takes this one. There's something more sympathetic about Chester (as previously mentioned) than Dandy. Even though Dandy is a victim of incest and his mother was a total enabler to his every whim, I still am not suuuuuper sympathetic to Dandy since he's a straight up murderer now. Don't worry Dandy fans, I still have crazy conflicted feelings about him, but Chester is so much more "awwww" (then swiftly followed by an "ooohh, nooo") inducing than Dandy. He was in WWII, so he probably saw many more traumatizing things than Dandy did in the comfort of his home. (Not saying you don't have emotional struggles even if you've led a privileged life, just saying Chester was on an actual battlefield.)

Who's Better for the Twins?

Uh, neither. Nope. No, please. Not a one of them should be with the twins. Bette and Dot need to be independent (yet, codependent on each other?) women. I have faith the women could be slightly decent people and getting more intertwined with either Chester or Dandy does not accomplish that. Dandy may protect them since he idolizes them — but for how long? One day, he'd be sure to turn on the twins. At least we know that Chester can satisfy them? (Eeeee so many uncomfortable feelings.) And although I'm really glad Bette and Dot had sex because everyone should be able to experience the joy of sex, Dandy and Chester are not boyfriend material (understatement of the century).

This was a real close one, but I'm going to have to give it to the number one creep in my heart: Mr. Dandy Mott. Homeboy has been creeping up AHS: Freak Show since episode one and shows no signs of stopping. And I wouldn't want it any other way (for entertainment purposes only). Dandy can try to act all cool and call Chester a sicko (which, OK, he kind of is), but Chester seems more tormented than just straight-up creep. Both men know how to schmooze, which is totally frightening, but Chester drops the facade quicker because of how severe his mental illness is. Dandy, on the other hand, is calculated and cold. He wants to be murdering people — and that's what makes him the ultimate creep of American Horror Story: Freak Show. (Ariana Grande agrees.)