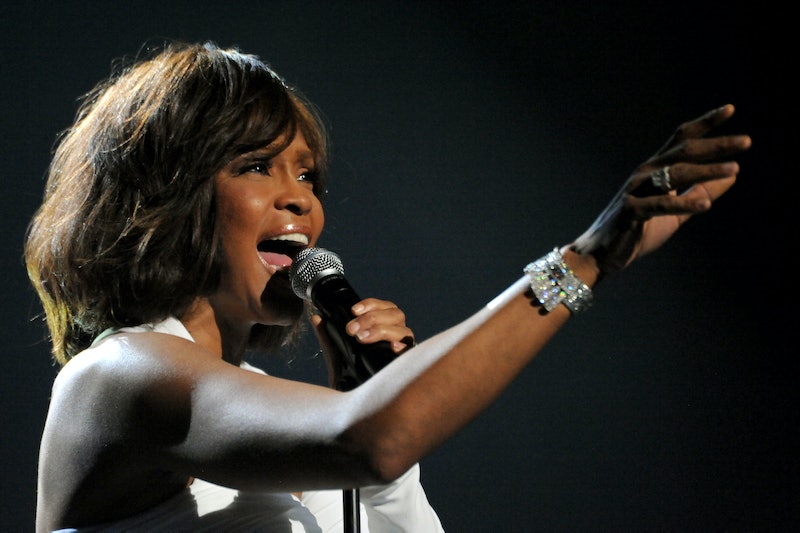 I can't believe almost three years have gone by since Whitney Houston died on Feb. 11, 2012. Lifetime's Whitney, the TV movie biopic about the star, premieres on Jan. 17 at 8 p.m., but it won't show the iconic star's final days. So how did Whitney Houston die? The Los Angeles County Coroner's chief Craig Harvey said in March 2012, "The final cause of death has been established as drowning due to atherosclerotic heart disease and cocaine use." She died in a bathtub a day before the 2012 Grammy Awards.

Houston's cocaine use was well-documented. She first admitted to using it when she was interviewed by Diane Sawyer in 2002. And then years later in 2009 (after Bravo's 2005 mess of a show Being Bobby Brown), she was interviewed by Oprah, which you can watch in the video below. Houston told Oprah she used drugs lightly before The Bodyguard, but it became heavier after she had her daughter Bobbi Kristina. And she admitted that cocaine and marijuana were her drugs of choice.

By The Preacher's Wife, [doing drugs] was an everyday thing...I would do my work, but after I did my work, for a whole year or two, it was everyday...I wasn't happy by that point in time...[Bobby and I] were lacing our marijuana with base. We weren't on crack. We weren't on no crack stuff. We weren't buying $20 jumbos. We were paying money. We were buying kilos and ounces and ounces. We would have our stash.

A lot of people blamed Houston's husband Bobby Brown for her drug use, but she never placed the blame on him in her interviews. The biopic does mostly focus on the couple's relationship, showing their sexual attraction to each other (there are some intense sex scenes), drug use, and Brown cheating (Houston's mother does not approve of the biopic — and who can blame her?). But in the Oprah interview, Houston said she left Brown around the year 2006 and she filed for divorce in October of that year. So when she died in 2012, she was not with Brown anymore.

As previously mentioned, Houston also discussed drugs years earlier with Sawyer, but in a much more disturbing fashion since she was in an unhealthier place. Houston admitted to using alcohol, marijuana, cocaine, and pills and said, "Nobody makes me do anything I don't want to do. It's my decision, so the biggest devil is me."

It's hard to watch Houston like that and it's even more difficult to hear her talk about what her future would be like in 10 years (a truly prolific question from Sawyer), when she died 10 years after this interview.

Yet, all of this prying into Houston's life is wrong. It's different when she voluntarily gave an interview because she chose to share her story (even though it still makes me uncomfortable). But the release of any private details about her life that have been made public after her death is not right. No one can really knows what she went through as an individual and seeing it played out for us in a TV movie is distasteful (although I'll give Whitney some credit for not depicting her death). Just because Houston was famous and extremely talented, doesn't mean the public had the right to know everything about her.

Although her drug use was the most scandalous part of Houston's death, her heart issues also contributed. According to the American Heart Association, "Atherosclerosis, or hardening of the arteries, is a condition in which plaque builds up inside the arteries ... Plaque may partially or totally block the blood's flow through an artery in the heart, brain, pelvis, legs, arms or kidneys."

I will always be in awe of Houston's music and voice. I grew up listening to her debut album Whitney Houston and The Bodyguard soundtrack. I consider her to be the most gifted female pop star that has ever lived — her voice is truly spectacular.

When Oprah asked Houston if she would ever be tempted by drugs again, Houston responded, "Oprah, I can only take today. One day at a time. Right now, no." Unfortunately, Houston wasn't able to win her battle with addiction, but her music will continue to live on and ensure that future generations know her immense talent.