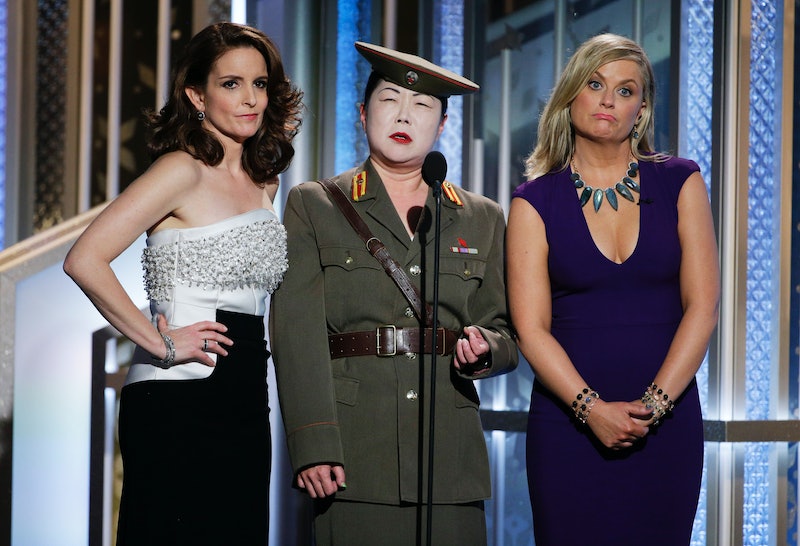 Anyone familiar with the satirical edge of Tina Fey and Amy Poehler’s comedy likely looked forward to the 72nd Golden Globe Awards with anticipation of a few hot button issues getting proper lampoonery. After a bombastic takedown of one deserving target (Bill Cosby, of course), Fey and Poehler reached the only topic of conversation that might up the ante: North Korea.

Fey and Pohler turned the spotlight over to a North Korean delegate, representing the cinematic industry of her so artistically liberation nation… of course, the party in question was actually Margaret Cho, draped in military garb and sporting a piece of pro-Kim Jong-un propaganda.

The joke is funny enough to anyone who has kept up with the news of the North Korean government’s open opposition to Sony Entertainment’s 2014 comedy film The Internship, which was nearly pulled from release altogether at the whims of an anti-free speech hacker group (presumably tied to Kim’s administration). But it’s even funnier to 30 Rock fans who’ll recall veteran comic Cho portraying a pre- and post-death Kim Jong-il on the show — her depiction took apropos form as a bumbling, fame-crazed maniac desperately in love with Elizabeth Banks’ character Avery Jessup (newswoman and wife to Alec Badlwin’s Jack Donaghy).

To hammer the gag home, an in-character Cho insisted — without so much as a single spoken word, mind you — on taking a photograph with Meryl Streep, who, Fey and Poehler facetiously quipped, loves the North Korean government. Apparently caught off guard but always the good sport, Streep played along with the shtick and smiled beside a hagiographic image of Kim Jong-un.

Taking the issues intrinsic to the North Korean situation a little more seriously, Hollywood Foreign Press Association President Theo Kingma took the microphone immediately after the routine to elicit a special support and admiration of everyone fighting for free speech, “from North Korea to Paris.” The mention of the French capital is of course a reference to the tragedies of last week’s Charlie Hebdo shooting, yet another episode in the world’s fight against artistic and personal liberty.

Cho returned to the stage later on in the broadcast, still in character, to keep the gag going for just a bit longer. When asked about how much fun she was having, the comedian denied enjoying Fey and Poehler's hosting capabilities (and with no small sum of subtlety too).

The phone foreign ambassador lamented the Golden Globes as an indication of America's lackluster showmanship... in stark comparison to that perpetrated by the great North Korea, that is. Cho spoke of her nation's superior aptitude in terms of showbiz and parties, and its rightful claim to one Dennis Rodman. We can't really disagree on that last point.

More like this
Amanda Seyfried Reflects On 'Mean Girls' & "Gross" Remarks That Men Made After It
By Jake Viswanath
President Zelensky Spoke Out On Ukraine's Chances Of Hosting Eurovision Next Year
By Sam Ramsden
Taylor Swift, Kerry Washington & More Speak Out On Uvalde Mass Shooting
By Jake Viswanath
Rebekah Vardy & Coleen Rooney’s Trial Has Officially Begun
By Bustle UK
Get Even More From Bustle — Sign Up For The Newsletter