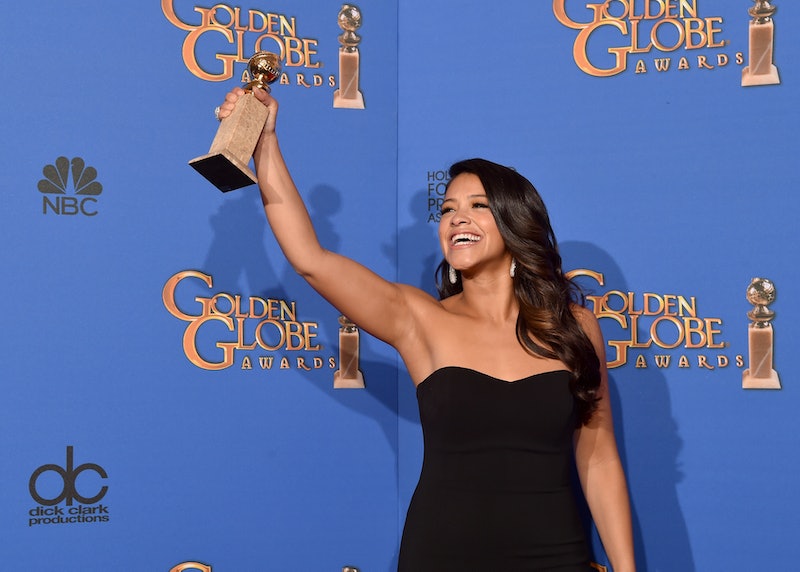 If there's anything that can pull me out of the dreaded post-holiday mourning period, it's award season — and the Golden Globes are one of the best (and first) shows of the year. The 2015 edition is hosted by two of the most perfect people on the face of this earth, Tina Fey and Amy Poehler (obviously) and very few of the winners had to be ushered off the stage via music, which is practically a first. Meryl Streep was perfect as usual, as were the very perfect Mr. and Mrs. George and Amal Clooney. And what could be better than Kristin Wiig and Bill Hader presenting together?

Fortunately, the Golden Globes don't have to end just because the event does. We have the perfect way to immortalize them: GIFs, duh, which happen to materialize on the Internet just as quickly as the moments they capture happen on live TV. Between Poehler and Fey's opening monologue, Amy Adams' killer feminist acceptance speech, and the slightly bizarre North Korea bit that lasted all night, there wasn't a dull moment to be had. 2015 Golden Globes, I am going to miss you. 2016 Golden Globes, good luck. You're going to need it!

Here are some of the best moments from this year's show.

Gina Rodriguez won for Jane The Virgin, and gave one of the most beautiful acceptance speeches ever.

Jeremy Renner made us all feel awkward for Jennifer Lopez.

And the win was dedicated to Leelah Alcorn.

Emma Stone being the most adorable human ever

And let's not forget Oprah was there.

And Patricia Arquette is all of us.

And Jared Leto's braid was out of control.

And George Clooney was doing this.