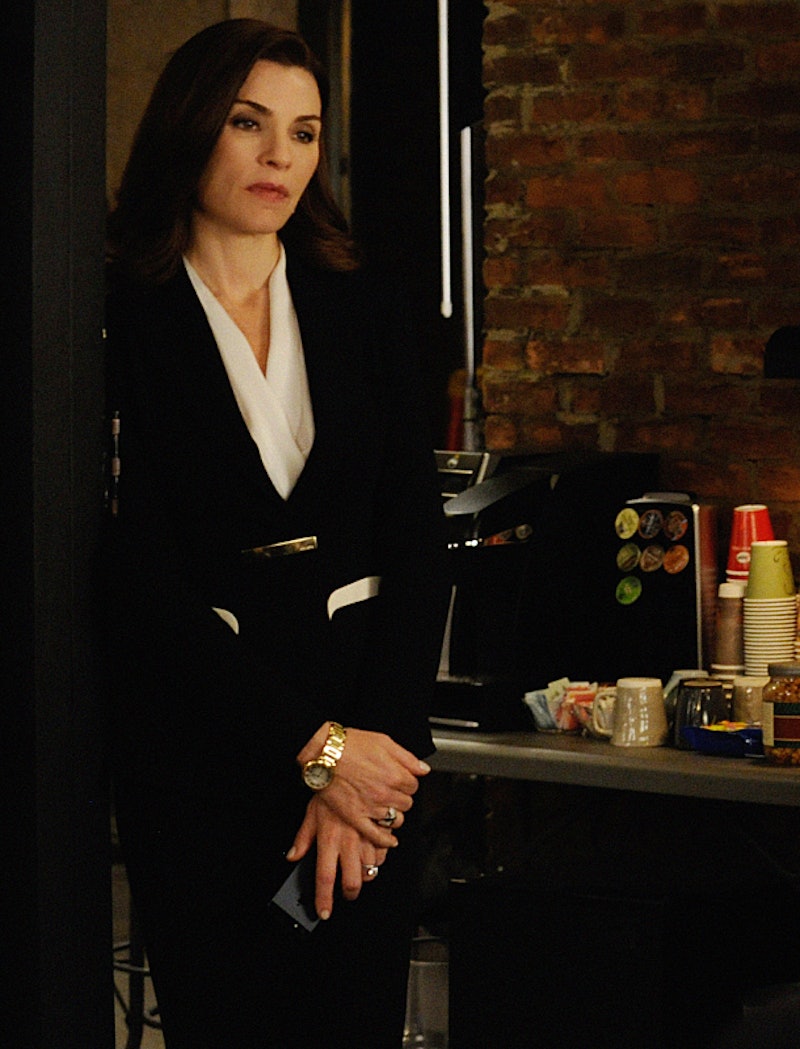 Whether she's dealing with her nosy mother-in-law or opposing counsel in court, nobody knows how to take someone down a peg like Alicia Florrick. Nobody. On Sunday night's new episode of The Good Wife , "The Debate," a reporter asked Alicia about her husband's affair with Ramona Lytton right in the middle of her debate with Frank Prady, her opponent in the race to become the next state's attorney. You know, because Peter's infidelity is totally relevant to Alicia's campaign. (Just so we're clear, that was sarcasm.) Thankfully, Alicia really let the reporter have it (with her words, of course). It was awesome.

Up until that point, Alicia was kind of blowing the debate, but somehow, the reporter's ridiculous and offensive question was able to snap her out of her funk and force her to really focus on the task at hand. I don't want to say that the reporter's douchebaggery was a "blessing in disguise," exactly, but... it was kind of a blessing in disguise. I don't know what else to call it!

As the reporter begins to ask his question, Alicia spots her daughter, Grace, in the crowd. She makes a snap decision: this dude needs to be put in his place. She doesn't even let him finish speaking before saying:

How dare you, sir. Do you have a personal life? Do you have a spouse? Do you know what it would be like to have your personal life spilled across the stage like this? Broadcasted into the home of your friends, your workmates, your daughter's friends at school? Do you know what that would be like? It would be one thing if my job had anything to do with my husband's infidelity. I'm not even sure what job that would be, but your question would at least then be pertinent. But I am running for state's attorney, I am running to be someone to put a dent in crime in this town. What does that have to do with my married life?

Bye! Alicia: 1. Jerk Reporter: 0. Less than zero, actually. He's at, like, negative a million after that ruthless takedown. Later in the episode, the debate is postponed, which is a shame, because Alicia was just starting to get warmed up! I hope that she'll be able to tap into that same fire when it comes time to go toe-to-toe with Prady again (without provocation from a reporter, of course).

More like this
Watch Benedict Cumberbatch Lead An ‘SNL’ Medieval History Lesson On Roe v. Wade
By Grace Wehniainen
Sandra Bullock, Girlboss Extraordinaire
By Matt Harkins & Viviana Olen
Cardi B Explains To David Letterman Why She Uses Her Star Power For Politics
By Jake Viswanath
What Is Barack Obama’s Net Worth? He Makes *Way* More Now As An Ex-President
By Hugh McIntyre
Get Even More From Bustle — Sign Up For The Newsletter