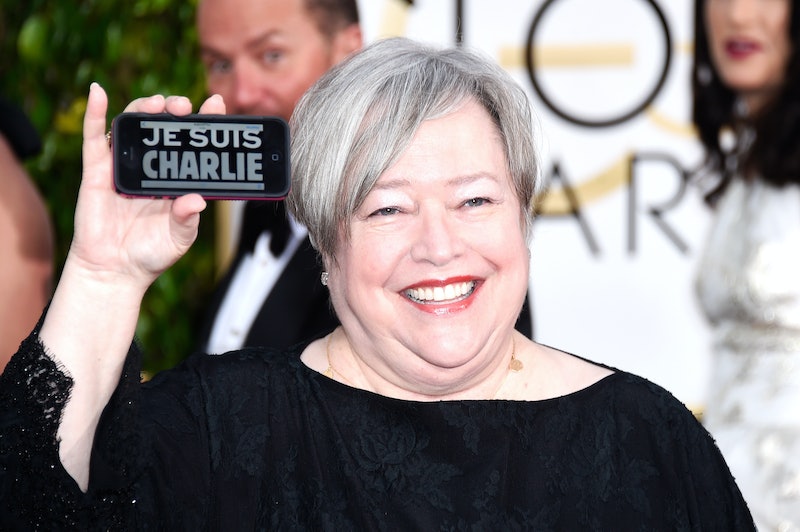 While all of us were warm in the safety and comfort of our homes while we watched the 2015 Golden Globes ceremony on Sunday, January 11, there didn't appear to be enough safety and comfort to go around at the award show itself. In the first place, a man initially reported to be Jane Fonda's boyfriend Richard Perry passed out during the ceremony, causing a scare that nearly resulted in the arrival of the paramedics. In the second place, beloved American Horror Story actress Kathy Bates was injured about an hour into the ceremony, and we're not completely certain what happened. The current theory is that someone might have stepped on her foot, which, considering the amount of heels and stilettos wandering around at that ceremony, sounds pretty lethal.

According to US Weekly, Bates was seen screaming out and then had to steady herself on a nearby chair before she collapsed. An insider added that "she limped back to her table and looked to be crying in pain" before nearby people hurried over to help her and see what was the matter. Luckily, by the time of the Fox party, the actress appeared to be feeling much better, to the point of being quoted as saying, "I'm fine now! I'm absolutely fine." In fact, later reports state that Bates wasn't actually crying out in pain, but was instead just super excited to meet Allison Tolman. Which... doesn't explain the limp, but it's definitely a happier explanation.

That's all the detail that we appear to be getting on that story, so now the question becomes what exactly happened? Did someone really step on Bates' foot, or was she so excited to meet Tolman that she actually felt faint? Is she suffering from some mysterious illness she is bearing in an admirable silence, or is she the world's biggest fangirl? Was she injured on the set of American Horror Story, and was that injury exacerbated by a stiletto going through her foot like a — well, like a stiletto going through her foot? Or does Tolman inspire the kind of dizzying joy that would make someone need to limp away to compose themselves? The answers to these questions are as elusive as a Chanteuse, but the important part of the story is that the beloved AHS actress is doing all right now.

Considering the bright lights and the merriment of the Golden Globes, it can be easy to forget that so much more goes on at the ceremony than what we actually get to see at the live broadcast. Bates might not have taken home the award for Best Supporting Actress in a Series, Mini-Series, or TV Movie, but it's a sincere relief to hear that she didn't take home an injury instead. And, clearly, that one momentary setback did nothing to ruin the rest of her night, so all's well that ends well.