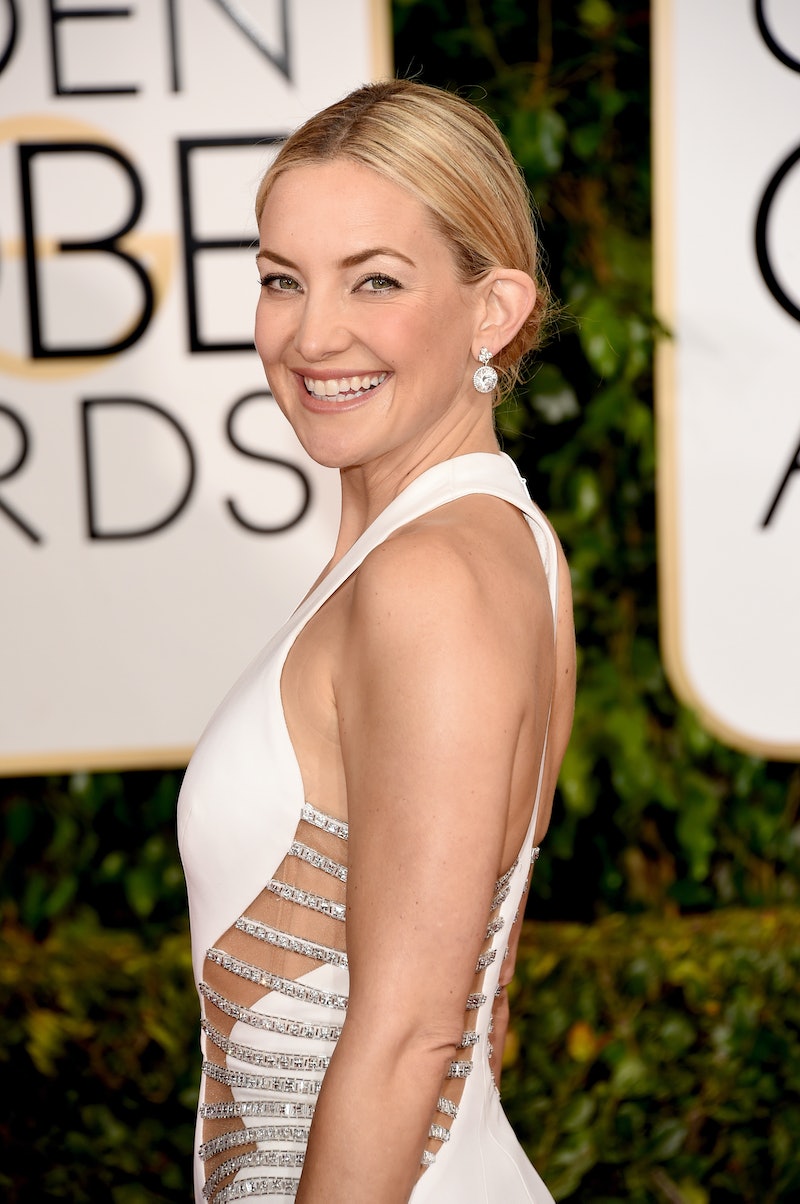 Call me crazy, but I find it utterly refreshing and utterly delightful when ladies love ladies. I spend a lot of time having to roll my eyes through things like the feud between Iggy Azalea and Azealia Banks or having to beg the media to stop pitting Jennifer Aniston and Angelina Jolie against each other over a divorce that happened a decade ago, so when I instead see things like Lorde coming to Taylor Swift's defense on Twitter or Cameron Diaz shutting down rude Drew Barrymore questions, I want to dance a jig. That's exactly how I felt when I heard that Jennifer Aniston had grabbed Kate Hudson's butt on the red carpet ahead of the 2015 Golden Globes ceremony on Sunday, January 11. The look on Hudson's face when it happened was utterly priceless.

The moment happened during the E! Live From the Red Carpet special. The duo popped in for a quick interview with Ryan Seacrest and, apropos of nothing, Aniston grabbed two big handfuls of Hudson's posterior, quipping, "I'm sorry, I had to do it!" Meanwhile, Hudson began cracking up, pointing out to Seacrest that, "[She and Aniston] feel comfortable," with each other. And it's absolutely true — that moment shared between Aniston and Hudson was an accurate representation of about 99 percent of all female friendships out there. If your best gal pal hasn't felt you up at least once by now, then how close are you really? (Just kidding. Or am I?)

However, as hilarious as that incident was, US Weekly reports that it didn't end there. Allegedly, during a commercial break in the ceremony, Matthew McConaughey also gave Hudson a playful poke in the butt and, while leaving the ceremony later that night, Hudson received a "friendly pat" from Paul Rudd. And that's where this joke went a little too far for me. Although the Golden Globes was a surprising feminist ceremony overall, one that could bode well for the feminist level of the Oscars show, there were a lot of sexist moments that left a bad taste in my mouth. (Yes, I'm thinking of Jeremy Renner's "Golden Globes" joke about Jennifer Lopez's breasts, among others.)

A hilarious squeeze from Aniston on the red carpet is one thing, but US Weekly gives no context for McConaughey and Rudd's "playful pats" — and, more tellingly, does not include Hudson's reactions to receiving those pokes and pats during and after the show. It's the fact that Hudson's reaction to these moments is skipped that really makes them come across as more awkward than funny, because it just leads me to wonder if she was as amused by them as the US Weekly report's language makes it seem. All in all, the Aniston and Hudson interaction is going down as one of my favorite of the entire night, but it's quite possible the joke went a little too far once the ceremony truly got underway. Still, that doesn't change the fact that this moment goes right up there with Benedict Cumberbatch's photobomb for me.