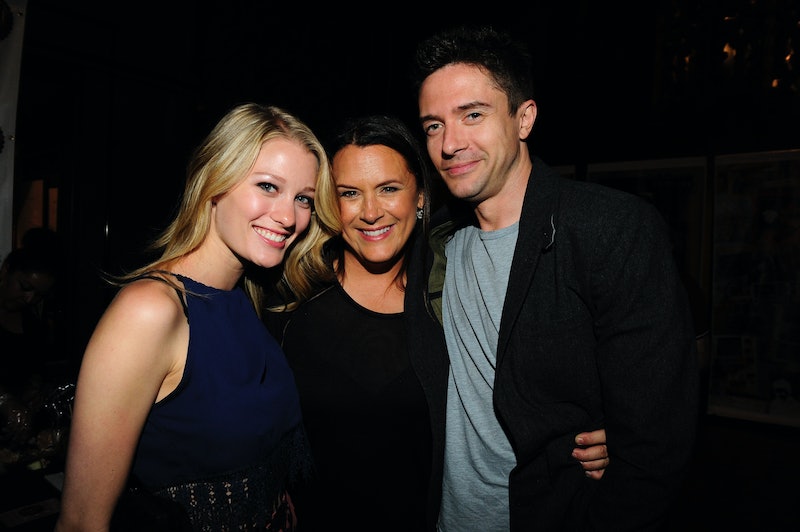 I don't want to get my hopes up, but it looks like 2015 might just be the year of That '70's Show weddings, guys. Mila Kunis and Ashton Kutcher are engaged, and as of last week, another one of their costars is engaged! According to what a source close to the couple tells E!, Topher Grace popped the question to girlfriend Ashley Hinshaw, and she said yes. Neither of their reps have confirmed the news yet, but Hinshaw was spotted out and about wearing a flashy ring on that finger, and reportedly, they're both "extremely happy." Sigh. Love's the best, isn't it? Except for one problem: who is Ashley Hinshaw?

If she looks familiar to you, that's because she is. Hinshaw's an actress, and she's been in a bunch of things you've probably seen, included but not limited to the 2012 so-lame-it's-awesome Miley Cyrus movie, LOL . She's also appeared in several episodes of True Blood, as well as several TV movies and shorts. Most recently, Hinshaw was in the pilot episode of ABC's Agent Carter. And since I thoroughly enjoy creeping Instagram pages (and no one is immune), after visiting hers I've decided that Grace has hooked himself an awesome lady — the fact that she's super adorable notwithstanding.

In fact, the only problem I have is that she doesn't post pictures with Grace... although I can't blame her, because the hype surrounding Hollywood relationships has to be a definite drawback to being open about the person you're dating on social media. But everything else she posts makes me want to be her BFF.

I've been toying with the idea of taking classes for awhile, but it's so much easier just to lay on the couch and watch Masterchef.

She got to meet the Target dog

I didn't even know this was still an option. Is this the same Target dog they've always had? Can't be...

She was recently cast in True Detective

Which is basically something everyone in Hollywood wants these days. She'll be playing a "troubled starlet" — and she gets to share the screen with Colin Farrell, Rachel McAdams, Vince Vaughn, and Taylor Kitsch. Best job ever.

And I'm ridiculously obsessed with her Golden Globes hair

BRB, have to Pinterest how I can make this happen on my own far less glamorous head.