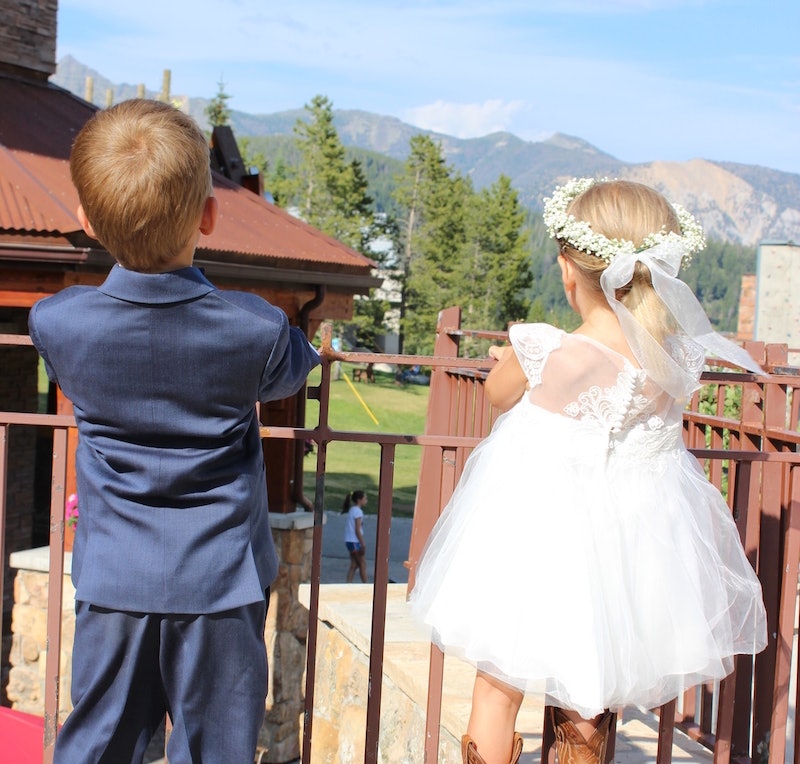 If Hollywood has taught us anything about wedding-borne relationships, it’s that the single bridesmaids and the prowling groomsmen are the ones who will end up together, whether for one night or for a few awkward dates where they try to make sense of that one night. Or, you know, the flower girl and ring bearer meet and then get married 20 years later — at least, that’s what happened to one lucky couple, whose adorable story will surely inspire a romantic comedy.

Here's how it happened: Brittney Husbyn and Briggs Fussy walked down the aisle together as children (she as a flower girl, he as a ring bearer), and likely didn’t have a second thought about each other until a chance meeting in college. Apparently, Fussy was sitting behind Husbyn in class when she turned around and said, “I think I have a picture of you on my wall at home,” which is not a line I would suggest for anyone else to use on a potential college crush, but that's just me. The line worked on Fussy, whose mother told Fox News that she's also had a picture of Husbyn displayed in her house “forever.” The classroom encounter led to a first date, which turned into a five-year relationship, and finally a proposal. Husbyn and Fussy got married this past weekend in Minnesota, where their own flower girl and ring bearer were probably forced to dance, and will likely feel pressure to track each other down 15 years from now.

I know I'm not the only one who thinks that this is basically the cutest thing ever. I mean, they walked down the aisle as little kids, and then re-met when they got older only to fall in love... is this not already a plot line in some upcoming John Green novel? Needless to say, the Twitter community has also picked up on the story, and it's feeling the feels:

Well, not this guy:

So keep your eyes peeled the next time you flip through a family photo album... you never know who from your past may pop up as the love of your life.