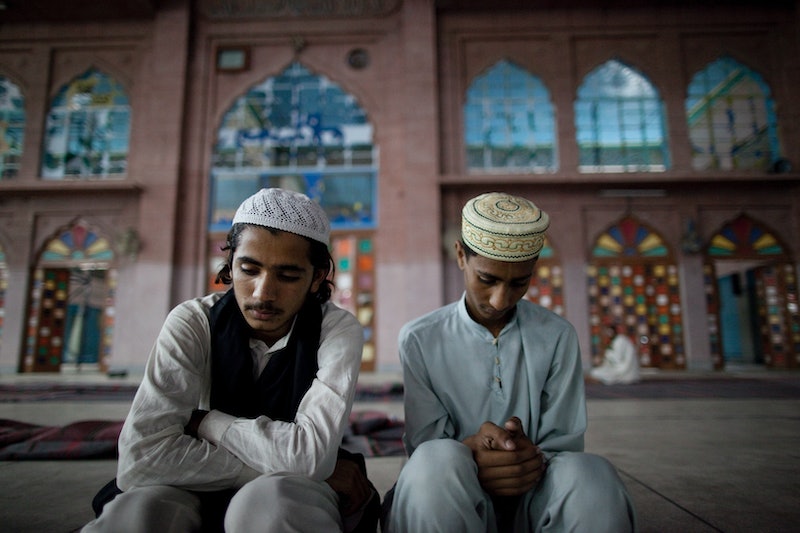 In December, members of the Taliban stormed a school in Peshawar, Pakistan, staging one of the deadliest massacres in recent history. Nearly 150 people, a majority of whom were high-school students, were killed in the attack. Now, students at Peshawar's Army Public School are returning for the first time on Monday, determined to take a stance against the Taliban.

According to Al Jazeera America, helicopters patrolled the skies above the Army Public School, which is located within Pakistan's Khyber Pakhtunkhwa province. Security also remained high on school grounds, with dozens of soldiers reportedly guarding the campus on foot. Al Jazeera also reported that "machine gun nests" were placed on the streets surrounding the schools.

Hasan Syed, a 10-year-old who survived the brutal Taliban attack, told Al Jazeera that he was not afraid about going back to school, even though he had family and friends murdered last month:

I will go back to the school. This determination is because my cousin [Asad Aziz] was martyred. If I go to school, it is like I am challenging the terrorists.

For some students and parents, the return was still wrought with grief. Abid Ali Shah, whose wife was a teacher at the school and killed in the assault, told the Associated Press that he wanted his sons to switch schools. "Everything is ruined here, everything."

Meanwhile, other students arriving at the school with their parents reportedly broke down at the entrance.

Gen. Raheel Sharif, Pakistan's chief of army staff, attended the Peshawar's school reopening, hoping to quell the fears and anxiety of the students and parents. According to a Pakistan army spokesperson, the general attending a morning assembly and met with students as a way to raise their moral. The general also vowed to end terrorism, calling on the students for their unity against violence.

Schools across Pakistan were closed following the Dec. 16 attack on the Army Public School, fearing that the Taliban would stage new attacks on schoolchildren across the nation. The Taliban is known to stage bloody attacks against Pakistani schoolchildren, as a way to retaliate against Western education.

The extremist group is also opposed to education for girls and women, and has previously launched assaults on Pakistani girls trying to receive an education. Pakistani education activist Malala Yousafzai, who won the Nobel Peace Prize in October 2014, was shot in the head by Taliban members while riding the bus to school in 2012. Yousafzai was also from the Khyber Pakhtunkhwa province, where the latest attack occurred.

Following the Dec. 16 massacre, Yousafzai urged the leaders of both Pakistan and the international community to take a stronger stance against terrorism. "Now it is time that we unite," Yousafzai said in a video message. "We should stand up together and fight against terrorism."