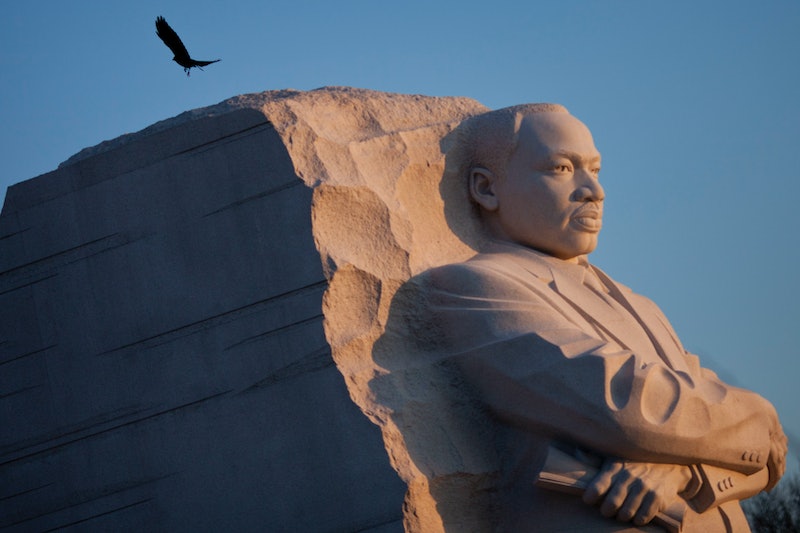 Martin Luther King Jr. Day, which falls on January 19 this year, has long been associated with volunteerism and community service. Every year the Corporation for National and Community Service helps businesses and non-profits around the country organize Day of Service events and projects to benefit their communities and honor the King's legacy of helping others. Hundreds of thousands of people participate every year, and 2015 should be no different.

What is different about MLK Day this year is the renewed emphasis on the work for which King is best known — the leading voice in the African-American Civil Rights movement. Artistic representations of King's tireless efforts to secure voting rights for African-Americans in the recently released Selma and last year's All the Way on Broadway, as well as current racial unrest in the aftermath of the deaths of Michael Brown and Eric Garner and the subsequent Black Lives Matter movement in the U.S., are powerful reminders that King's most significant contribution was fighting, and ultimately dying, for equal rights for African-Americans, and that nearly 50 years after his assassination, there is still more work to be done.

Books that capture the conditions and prejudices against which King and his followers fought are plentiful. In honor of this year's MLK Day, here are some of the most moving works depicting the pre-Civil Rights world that MLK dedicated his life to changing.

Roll of Thunder, Hear My Cry by Mildred D. Taylor

Racism in Depression-era Mississippi is seen through the eyes of young Cassie Logan in Mildred Taylor's 1976 novel. Roll of Thunder, Hear My Cry (and its subsequent sequels Let the Circle Be Unbroken and The Road to Memphis) chronicles how, despite owning their land and being removed from slavery by 70 years, the Logan family struggles for stability and survival in the face of prejudice in their small Mississippi community, which takes the form of everything from inadequate schooling to lynchings.

True, you've probably already read Harper Lee's 1960 American classic about racial injustice, but this is a great opportunity to re-read it (if you're into that sort of thing). Like Roll of Thunder, Hear My Cry, To Kill a Mockingbird shows a pre-Civil Rights world through the eyes of a young protagonist, although in this case it's a white child, Scout Finch, who is trying to make sense of a society that treats whites and African-Americans by different rules, with the help of her father, perennial "best literary dad" winner Atticus Finch.

The Help by Kathryn Stockett

Set during the 1960s Civil Rights movement, The Help looks at race relations through the lens of African-American domestic help and their white employers in Mississippi, particularly the complicated, nuanced relationships between white Southern children and the African-American maids and nannies that raised them. Author Kathryn Stockett had firsthand experience with that aspect of the story; born in 1969 in Jackson, Mississippi (where The Help is set), Stockett's was brought up under the care of an African-American maid, Demetrie.

The Watsons Go to Birmingham — 1963 by Christopher Paul Curits

The fictional Watson family in Christopher Paul Curtis' 1995 novel have a fateful brush with history during their visit to Alabama from their home in Flint, Michigan. Curtis places in the Watsons in Birmingham during the bombing of the 16th Street Baptist Church in September 1963, giving them — and the reader — a view into the brutal tactics white supremacists used to prevent integration, and a turning point in the Civil Rights movement.

A Lesson Before Dying by Ernest J. Gaines

Ernest J. Gaines' 1993 novel is an insightful look at how African-Americans, as individuals and communities, struggled to deal with the devastating psychological effects of racially motivated injustice, as narrator Grant Wiggins tries to help Jefferson, a young African-American man sentenced to death for killing a white store owner, die with dignity in post-World War II Louisiana.

African-Americans returning from military service in World War II and the Korean War to face discrimination and segregation was one of the many driving forces of the Civil Rights movement. Toni Morrison's 2012 novel, dramatizes this conflict, as protagonist Frank Money, an African-American Korean War veteran, encounters inherent racism on his journey to his family's home in Georgia (including a chillingly prescient moment with a boy who is shot by a police officer after being seen playing with a cap gun.)

Their Eyes Were Watching God by Zora Neale Hurston

Considered a leading work in feminist literature as well as African-American literature, Nora Zeale Hurston's 1937 novel tells the story of the unsinkable Janie Starks. Although initial reaction to the book was negative, over time it has come to be regarded as a reflection of African-American society in the tumultuous years between the Civil War and the start of the Civil Rights movement.

Like King, Rosa Parks is a formidable figure in both the Civil Rights movement and American history. With a simple act of defiance in 1955 — refusing to give up her seat on a Montgomery, Alabama bus for a white passenger — Parks became an icon and activist in the push to end segregation. Douglas Brinkley's Rosa Parks: A Life, published in 2000 was the first major biography of Parks, and remains a definitive account of her life, which included many efforts to end segregation and racism and advance the rights of African-Americans.

Why We Can't Wait by Martin Luther King, Jr.

Of course, no reading list honoring MLK would be complete without work from the man himself. King wrote prolifically in his lifetime, but Why We Can't Wait captures the immediacy and passion King felt in 1963, during the tumultuous and trying Birmingham campaign, and includes his landmark "Letter from a Birmingham Jail." Looking for insight into why King and his followers fought so hard and sacrificed so much? Look no further.

More like this
The 20 Best Audiobooks To Fall Asleep To
By Aoife Hanna and K.W. Colyard
30 Books To Read This AAPI Heritage Month
By K.W. Colyard
The Church Of Scotland Votes To Allow Same-Sex Marriages
By Sam Ramsden
25 Quotes About Love To Share During Pride Month 2022
By Madeleine Aggeler and Emma Garza
Get Even More From Bustle — Sign Up For The Newsletter