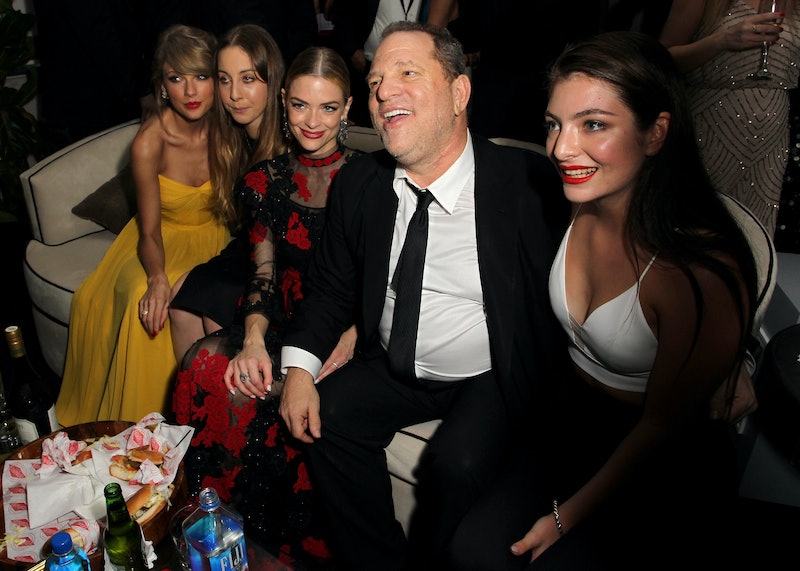 Kevin Spacey said something during the Golden Globes red carpet that really stuck with me throughout the night. When walking the carpet he ran into Ethan Hawke, who as at the award show for Boyhood. Hawke, who had never been to the Globes, asked Spacey if people eat at the Globes, which Spacey responded, "No, you just get drunk at this event." And just like that, the tone for the evening was set. Once I had that on my mind, everywhere I looked, the red carpet, the ceremony's tables, I saw alcohol, which is why a roundup of celebrities drinking at the Golden Globes felt very needed.

The LA Times reported that there would be 600 bottles of wine at the Globes, 400 bottles of Champagne magnums, 1,500 mini-Champagne bottles, plus hard liquor. I can't even wrap my mind around how cute 1,500 mini-Champagne bottles would be. So I guess what I'm trying to say is, the Globes may be over, but that doesn't mean that the hangovers are! Yay for celebrating into the week, am I right? Here is your roundup of the drinking scene at the Golden Globes, because, in the words of fake POTUS, Kevin Spacey, "you just get drunk" at the Golden Globes.

ICYMI, this event has a combined total of 1,900 bottles of Champagne. There are so many bubbles in this room, I'm surprised the building didn't float away.

The Car Ride Over

The Tatum clan cracked open a cold one before they even hit the red carpet, a.k.a., why you want to party with the Tatums.

I don't know if it was a conscious choice to have the bottle of Moët so perfectly placed in the photo, but it definitely classes up the pic.

The Straight Shot with Clooney's Tequila

The Clooneys basically spat at Giuliana Rancic when she asked them to take a shot with her, but that did not deter our girl G. Instead, she just rallied and took the shot solo, like a true champ.

Not only does this photo reaffirm why Chrissy Teigen is all of us, just in Chrissy Teigen form, but it also confirms that we all need a spout for all the mini bottles of champagne we drink.

Seriously, where can I get one of these spouts. So practical for the 1,500 bottles of champagne I own.

While we don't know if Benedict Cumberbatch's photobomb was alcohol induced, we do know that the last time he pulled a stunt like this, he blamed it on the a-a-a-a-alcohol, so the possibility is there. Side note: BC has great photobomb form.

More like this
Kourtney & Travis Crashed His Daughter’s TikTok Live In Their 2nd Wedding Outfits
By Grace Wehniainen
When Was 'Bling Empire' Season 2 Filmed?
By Alyssa Lapid
20 Photos From The 'Stranger Things' Season 4 Premiere To Make You Feel Old
By Alyssa Lapid
Everything To Know About 'RHONJ' Season 13
By Brad Witter
Get Even More From Bustle — Sign Up For The Newsletter