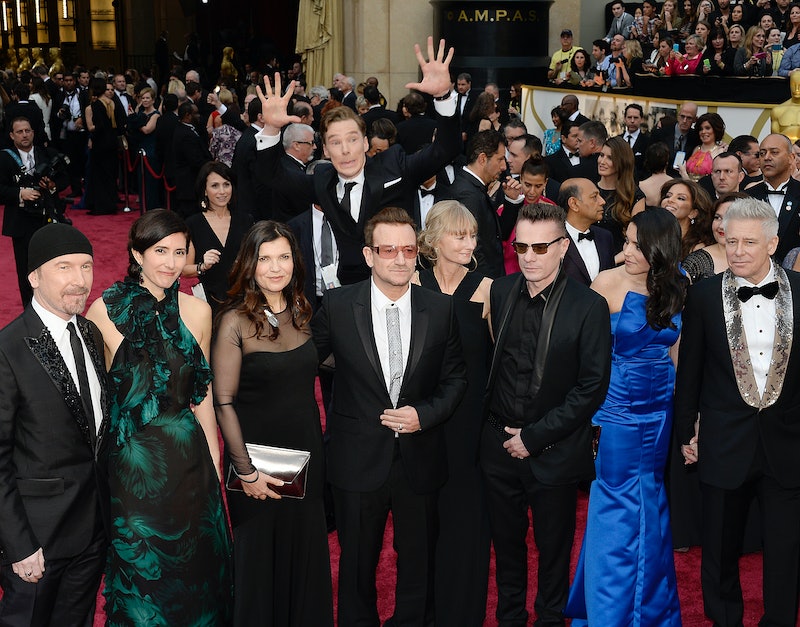 The world is finally learning why Benedict Cumberbatch photobombed U2 at the 2014 Academy Awards, and the answer might be a lot more basic than you ever thought. In an interview with Time Out London, Cumberbatch gives two reasons the photobomb happened; one, Ellen DeGeneres, and two, vodka. If those two things haven't made you photobomb something in your life, then you're just not living. According to BC, Degeneres, who was hosting the Academy Awards — you remember, the selfie? — had her team handing out little bottles of vodka on the red carpet, and after enjoying, says he saw the opportunity and "never felt an impulse like it."

So it seems Cumberbatch is taking a page from Jamie Foxx's (feat. T-Pain) 2009 lyrical genius song "Blame It (On The Alcohol)" but really, who hasn't before? But now knowing that this is what happens to Cumberbatch after imbibing, one can't help but wonder other instances he could have done drunk, right? Because if photobombing U2 is what happens after throwing back a few "miniatures," I can only imagine what happens when he is straight up hammered. Here are four other things Benedict Cumberbatch might have done after a drink.

If Cumberbatch wasn't drinking during this, he should have been, because no one should ever hear — much less read — R. Kelly lyrics sober.

Benedict Cumberbatch does the "Harlem Shake" with his hand

Look, he's on a plane, thinking about the "Harlem Shake," if those two things don't mean he's had a cocktail, then they mean really bored — in which he should just get drunk.

Benedict Cumberbatch on what his last name sounds like

When Cumberbatch stopped by Katie Couric's talk show in 2013, they got on the subject of if he ever thought about changing his last name early on in his career. Cumberbatch says after six months of trying to get work as an actor, he moved to a new agent, who asked, "Why on earth aren't you calling yourself Benedict Cumberbatch?" to which BC said, "Well because it sounds like a fart in a bath."

You've got to have a liquid layer before agreeing to have freezing water thrown on you multiple times.

Check out the video of Cumberbatch's photobomb set to — naturally — Jaws music.