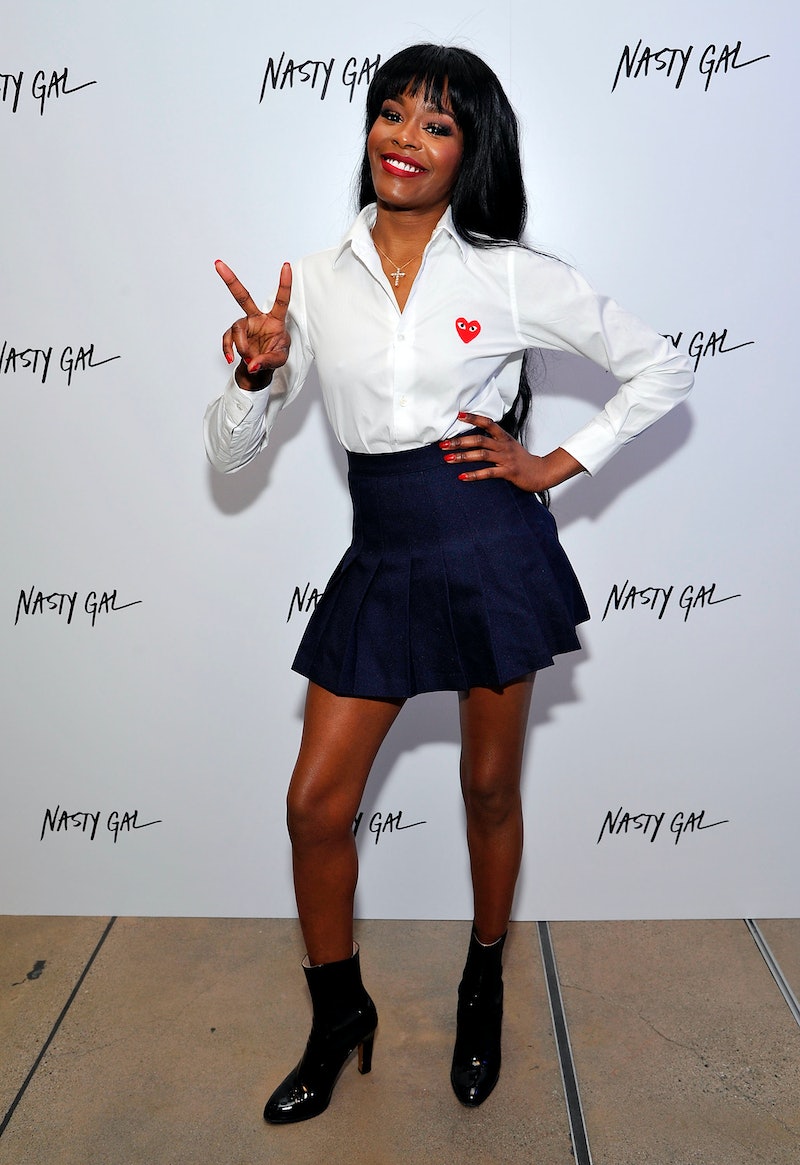 We've been hearing an awful lot about Azealia Banks lately on our feeds, and — though I would personally consider her my ride or die — I can say [without an ounce of shade] that the reason for this isn't news; it's the same one that's been a large contributor to her publicity since she first broke out on the scene. I used the word "awful" not because I wanted to, but because it adequately describes the general opinion of the Twitter community, and Banks' incredulously eventful history of Twitter feuds with other musicians keeps it that way. Recently, her 140-character tirades against racist oppression in America (and all artists who contribute to that system in any way, e.g. Kendrick Lamar in his Billboard cover interview) have garnered a fair amount of attention, and the haters have lazily attributed all of these more socially-charged Twitter rants to an overcompensation for her lack of success as a musical artist — even though her new single "Chasing Time" hit number 24 on the Billboard Dance/Electronic chart this week, they label her as just another "angry black woman" who should stop "living in the past."

In the last few weeks alone, she's called for reparations as a descendant of the slave trade, called out Iggy Azalea for being silent in recent matters of racial injustice, and called upon her latent powers of witchcraft to ensure payback from those who have been dumb enough to wrong her.

And although she gets a bad wrap for the volatility of her voice on social media platforms, that same volatile quality is what gives her an inimitable edge on her latest album Broke With Expensive Taste, released in November with the backing of the production company Prospect Park after a fall-out with her former label Interscope over artistic differences; it's an album you should definitely check out if you haven't already (especially the track "Soda" because it's the best). And whether you hate her because she's not afraid to be angry or love her to pieces because she says what she feels, she's still an obsession (and in my case, most definitely so) — not just because her anger towards the poor state of race relations in America is justified, and not even because her rap game is tight and arguably some of the most original in the business right now, as was proposed by Bloc Party's Kele Okereke on Noisey in a letter defending her musical talent. Azealia Banks is my bae because there's another side to her, one which we all take for granted when we look at her and see only what she angrily tweeted yesterday — one that's less vocal yet even louder in its artistic expression: the killer style of her day-to-day looks.

Throughout our civilized existence, fashion has pushed its way to the front lines of personal artistic expression as one of its clearest and most accessible forms; choosing the "right outfit" became an act of self-revelation, a tangible extension of the personality through material selection. So, with that philosophical idea of individual style in mind, I give you my little pictorial ode to Azealia Banks — a.k.a. the realest, a true artist in these dark times — and her beautifully eccentric sense of fashion. Courtesy of her Instagram account:

First thing's first (because you said that this is what you would like me to use when addressing you, and I respect that).

And even mermaids try to jack her style.

CHEERLEADER FOR THE CLOVERS

How anyone can look at this and not pleasantly think of Bring It On is beyond me. Also, that weave.

I think I could definitely see her being a young Sophia Petrillo. She's got the mouth for it.

I mean, it is the best shirt, though.

There's just something about repurposing old mascot costumes that I love. [Only a little bit of shade here.]

This is nudity in one of its most appropriate forms. Yay, artistic expression!

THE ONLY GIRL ON FIRE

Tokyo was lit by the time she was done with it, too.

Because every Misty has an Ash who's got her back.

She's got that 80s flair with a futuristic twist — a new-age look for a new-age voice.

And my personal favorite... It's just the shirt. The visor. The lay. Yup, she could get it. (P.S. You can buy that shirt and other graphic beauties like it on O-Mighty — Banks has a few pieces herself, and honestly, they're too relevant not to have.)

And I couldn't be a real fan without dropping her newest music video here to top this ode off. But I mean it: if you haven't checked out Broke With Expensive Taste yet, then you're behind. There's a whole lot more to this girl than basic Twitter feuds and hilariously shady wordplays like "Igloo Australia" — and I'll keep defending her artistry for as long as she keeps on keeping it real. Over and out.