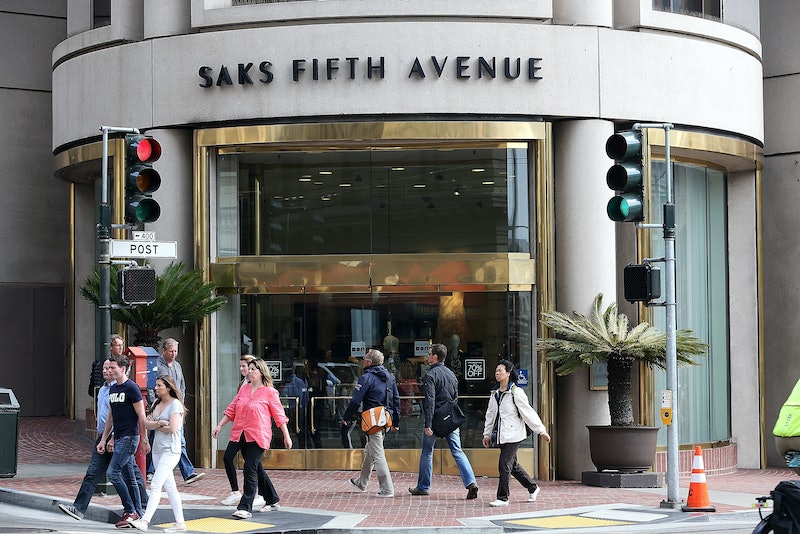 Oh, it looks like my calendar must be wrong — I thought we had just begun 2015, not 1915. Saks Fifth Avenue is obviously stuck in the dark ages: After former employee Leyth Jamal sued Saks for transgender discrimination, the brand responded in a less-than-tolerant manner. Instead of taking a hard look at how they treat their trans workforce, Saks is basically saying that it's not discrimination if it's against a trans person. On December 29, Saks filed a motion to dismiss Jamal's claim, stating that transgender people aren't protected under Title VII of the Civil Rights Amendment of 1964.

This is a harrowing reminder that although the nation has been making strides in the way it sees and treats trans people, there is still a deep-seated prejudice against the community. In a statement by her lawyer, Jamal says she was belittled by coworkers at the Houston-area location she worked at by being forced to use the men's restroom, enduring intentional use of male pronouns, and being fired after she brought to light an interaction in which her employer told her to dress more like a man, asking her to "separate her home life from her work life."

Although her treatment is sad, misguided, and cruel, the bigger issue here is the way that Saks is handling it. By arguing that transgender people aren't protected under Title VII, they're making a statement that even though they don't think she was discriminated against, it wouldn't "count" even if she was, because legally, they believe they have the right to treat her like a man even though she identifies as a woman. Saks also says that she should be responsible for the cost the company is incurring from the legal battle.

During the proceedings, Jamal says she was repeatedly misgendered by the retailer. In its filing, Saks also repeatedly included [sic] next to female pronouns in quotations from Jamal's case, which indicates that there was some kind of error in the original text. Even in legal jargon, this is incredibly demeaning and insulting.

In their filing, Saks defended their reasoning by citing legal cases that have ended in decisions stating that Title VII does not include trans people, from 1982 to, sadly, November of last year (Eure vs. The Sage Corporation.) But they're missing two major opinions here: both the United States Equal Employment Opportunity Commission and the Justice Department agree that transgender people are, in fact, protected under Title VII. Just a month ago, Attorney General Eric Holder announced that federal prosecutors would stand by this decision.

What's especially sad here is that a year ago, Saks scored a 90 out of 100 on the Human Rights Campaign's Corporate Equality Index Score, which measures overall how LGBT-friendly a company is. While it's great that gay, lesbian, and bisexual individuals benefit from Saks' practices and policies, selective exclusion of trans individuals is not OK.

The court's decision on whether or not to dismiss Jamal's case based on Saks' filing will be pivotal in moving toward (or, unfortunately, away from) equality for the transgender community, both in the workplace and otherwise.