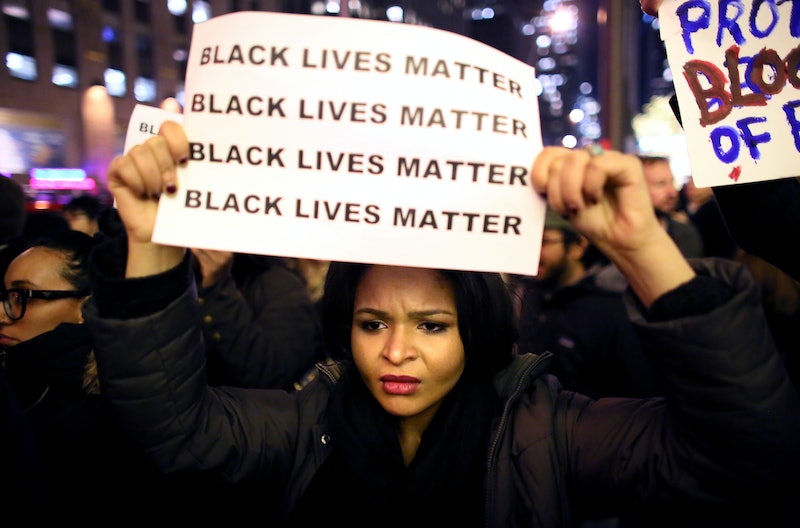 The #BlackLivesMatter movement gripped America at the tail end 2014, as communities protested police brutality and the killings of Mike Brown in Ferguson, Tamir Rice in Cleveland, and Eric Garner in Staten Island. Now, with the newfound hindsight of 2015, the American Dialect Society has crowned #BlackLivesMatter as Word of the Year. And guess what? That decision matters.

At the ADS' annual meeting in Portland, Oregon, on January 9, over 300 linguists, lexicographers, and etymologists packed into a room to vote on the Word of the Year, along with other awards including "Most Unnecessary" (baeless) and "Most Euphemistic" (EIT, enhanced interrogation technique). For the first time, "Most Notable Hashtag" appeared as a category as well. Linguistics professor Sonja Lanehart of the University of Texas-San Antonio had made it her mission to get hashtags into the awards, particularly #BlackLivesMatter.

“I went in and I told them that my goal for this meeting was to recognize the hashtag," Lanehart tells Bustle. #BlackLivesMatter swept the category with 226 votes out of the 242 cast. "I've never seen a word be so overwhelmingly a favorite," she says.

Although Lanehart pushed #BlackLivesMatter, it was Barratt, a white woman, who nominated it for Word of the Year. Afterwards, Lanehart says a few attendees flexed their newfound vocabulary and asked if #BlackLivesMatter had itself been Columbused.

After that vote, Leslie Barratt, a professor at Indiana State University, nominated #BlackLivesMatter as Word of the Year. It won with 196 votes out of 220.

Lanehart, who is black, says she believes the selection represents a shift in the field of linguistics. She'd been coming to the annual meeting since before she entered grad school, when it comprised 30 or 40 (mostly old) white men.

Now, many twentysomethings come, and bring fresh perspectives. Lanehart says that once her younger colleagues saw they could include words from their own lives, they suggested words like "misogynoir" (sexism directed at black women), and "Columbusing," (when white people claim to have discovered something already known to people of color).

"To see this metamorphosis not just of the event, but the consideration that this was something that mattered ... I was actually proud," Lanehart says.

Although Lanehart pushed #BlackLivesMatter, it was Barratt, a white woman, who nominated it for Word of the Year. Afterwards, Lanehart says a few attendees flexed their newfound vocabulary and asked if #BlackLivesMatter had itself been Columbused.

“Oftentimes, when black people say things, they don’t get heard, because people just see you’re playing the race card," Lanehart explains. “Oftentimes it takes someone who’s not of color, a.k.a. white, before other people will start listening.”

#BlackLivesMatter stood out to Barratt as important. "Within the US it has been a year of violence by police officers over the issue of race," Barratt explains."That hashtag resonated and became emblematic."

Looking at these #BlackLivesMatter tweets from the past few days, you can see how the hashtag continues to function as a meeting space and a rallying cry on Twitter.

“While #BlackLivesMatter may not fit the traditional definition of a word, it demonstrates how powerfully a hashtag can convey a succinct social message,” Ben Zimmer, chair of the New Words Committee of the ADS said in a statement about the vote.

Indeed, linguists are increasingly nerding out over hashtags' unique properties. "A hashtag sort of smashes grammar," says Allan Metcalf, the executive secretary of the ADS. Twitter users can follow a hashtag with a full sentence reaction or a single word, which makes it easy to comment on the issue at hand.

Hashtags slip into spoken language, too. Barratt says that from a linguistics perspective, hashtags effectively act like words, in the same way that acronyms became part of normal speech after World War II.

Lanehart calls hashtags "embedded lexical items," and says they're interesting because they invoke deep, elaborate stories and layers of images. Think of #BringBackOurGirls, which brings to mind the mass kidnapping along with that picture of Michelle Obama holding a sign. Linguists are also intrigued by how hashtags spark counter-hashtags, like #AllLivesMatter, which Judith Butler criticized in the New York Times.

Still unconvinced that hashtags count as words? Just breathe a sigh of relief that the Word of the Year isn't an emoji.