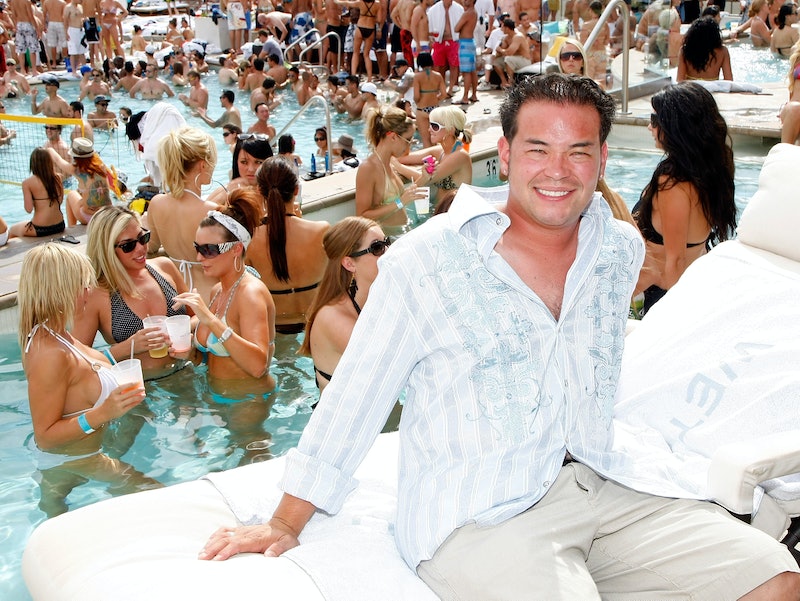 TLC is airing a new season of Kate Plus 8 starting Jan. 13 and every time we revisit the Gosselin family, that big elephant in the show's title makes a reappearance as well. Where is Jon Gosselin? After the couple divorced in 2009 (and solidified my belief that a vow renewal ceremony is the quickest and most ironic way to kill a marriage), Jon spiraled into a reality star nightmare of partying, girlfriends, and scandals. Since then, he has been keeping low in some unexpected ways. Remember when he was waiting tables and living in a cabin? That was less than two years ago. What is Jon up to today? Last year, he was publicly slamming his ex-wife on Couples Therapy . He really has an issue with the names of reality shows, doesn't he? I guess that's some kind of therapy.

If we're being honest, I hope that the answer to "Where's Jon Gosselin" is and always will be "far, far away" from me. I don't know him or his family personally, but I've never been very fond of Jon, and prefer the series without his name in the title. However, the former reality star is always on the news in one way or another, so it's not too difficult to check back in.

A Roof Over His Head

A while back, Jon Gosselin was rumored to have been evicted from his home, as reported by Us Weekly. There were even rumors from Radar Online that he had abandoned his ex-girlfriend's pet kitten! I'm not exactly a fan of the guy, but that's pretty tragic. According to an interview with Extra's Mario Lopez in November, this is no longer the case, if it ever was in the first place. He has a home, everyone!

Single But Not Mingling

This is what the father of eight told Lopez about his personal life.

I'm dating myself right now... because I don't even know myself… I've always been with a woman… now, I’ve got to figure out who I am. Being a father, devoting my time toward my kids…

Good for you, Jon! It's always good to do a little reflection and self-care. He also revealed last year on the Wendy Williams Show that he's had a vasectomy, so don't expect any more little Gosselins any time soon.

Getting His Stuff Back

Last October, Jon was seen at the Gosselin Family Yard Sale buying (presumably) his Call of Duty game back from his own family. Too funny! However, as TMZ points out, since the yard sale was for charity, he wasn't really buying his stuff back. He was taking it back and making a donation. Look for the silver lining.

On the Ones and Twos

Wait, what?! Jon Gosselin is a DJ, having been inspired by Liz Janetta, the ex-girlfriend he appeared on VH1's Couples Therapy with last year. At least this gig sounds better than the middle school proms he and Janetta were MCing back in 2012. So, now we know where he is for sure. Still in Pennsylvania, still figuring out who he wants to be. Good luck to you, Jon!

More like this
Scott Disick’s First Time Around Kravis Was “Awkward,” To Say The Least
By Jake Viswanath
Kim Kardashian Joked That Her Wedding To Kris Humphries Was A “Gay Wedding”
By Jake Viswanath
Kourtney Kardashian Broke Her Engagement Ring & Cried In Her Closet For Hours
By Jake Viswanath
8 'Selling Sunset' Continuity Errors You Definitely Won't Be Able To Unsee
By Rachel Mantock
Get Even More From Bustle — Sign Up For The Newsletter