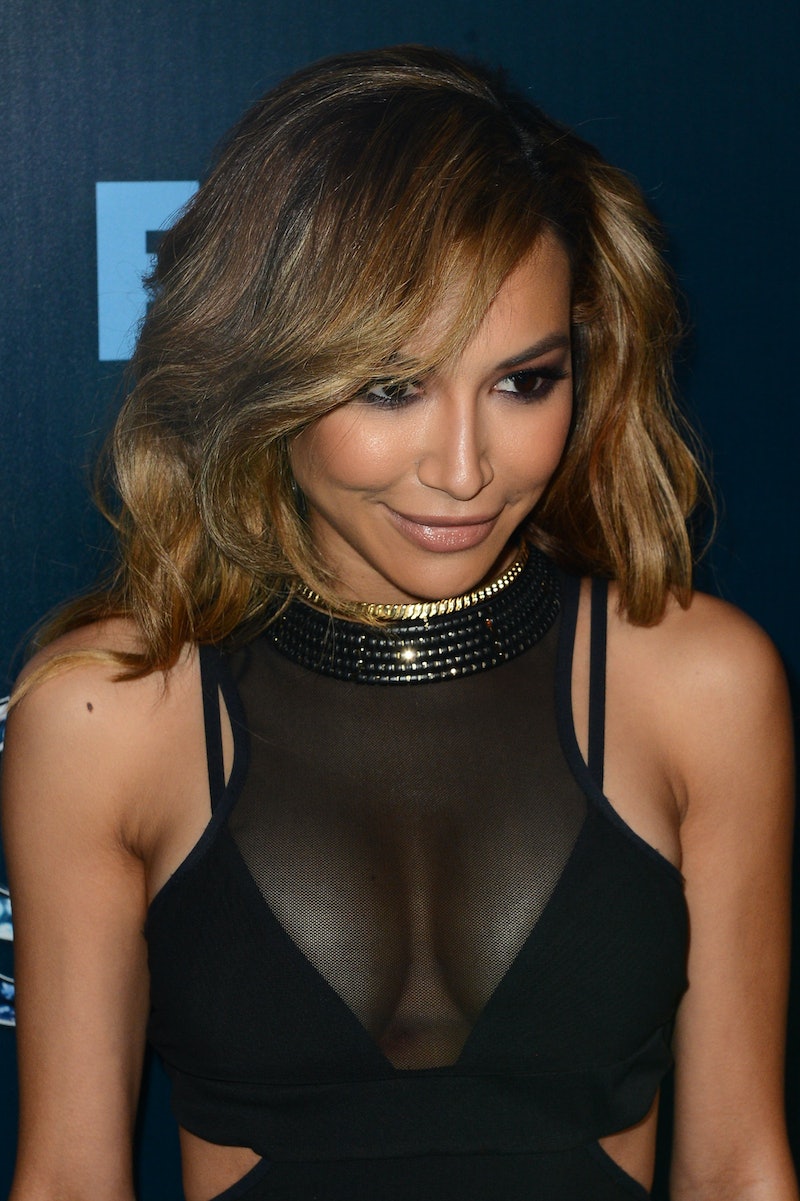 I need at least ten hands to face palm hard enough for this one, you guys. Naya Rivera has largely been laying low since her reduced role on the final season of Glee and her marriage to Ryan Dorsey (following her break up with Big Sean), and it looks like I should have been hoping she would keep to herself for a longer time. While co-hosting The View Tuesday morning, Rivera joked that whites shower more than "ethnics" — and it's important to note that it was, in fact, a joke. It's important to note because that is the defense that Rivera used on her own behalf when Twitter justifiably responded with complete outrage.

If you're thinking that my summary makes the moment sound worse than it actually was, think again. "I have a theory about showering, which is I think that white people shower a lot more than ethnics. I think that showering more than once a day, or every day, is such a white people thing," said Rivera. "My mom is half-black, half-Puerto Rican, she showers every day, so I can say this. I'm now married to a white man and he showers a lot. Like two, three times a day. I'm like, 'What are you doing?'"

I don't even know where to begin with this. First of all, Rivera's examples for her assertion don't really back up the "joke." She says that showering every day is a "white people thing," and then immediately declares that her non-white mother does so. And her revelation that her husband, Dorsey, showers multiple times per day sounds like more of a personal quirk than a racial quirk. That, I suppose, can be chalked up to why Rivera later claimed to have been joking with the comment, but, I mean, come on. Even a joke has to make logical sense.

In the second place, coming from the mouth of an African-American/Latina actress like Rivera just makes this joke even more offensive. The stereotype that African-Americans are "dirty" or "contaminated" is a particularly insidious and long-running one, with studies having been done to reflect the effect that attributing darker skin with negative attributes has on African-American children. If Rivera wants to reveal to the world that she showers once every three days, then that is her prerogative. She's rich and she's famous; she doesn't have to shower if she doesn't want to. But to project her personal habits onto every minority race, even for a joke, was not funny. It was rude.

Her View co-hosts might have laughed, but it's particularly telling to me that, almost immediately after Rivera made her "humorous" remark, Rosie O'Donnell pointed to an African-American woman in the audience that was "about to have a heart attack." And she was far from the only one. Rivera's name began trending on Twitter Tuesday afternoon as the news of her comment spread and people reacted with justifiable outrage to a woman of color of such visibility using that visibility to reinforce racial stereotypes even as a joke matter.

It's always a tricky thing whenever a celebrity attempts to speak on behalf of their entire race — and by "a tricky thing," I mean it's so easy for them to make missteps or isolate an entire group of people that it's really better if they only speak for themselves. Had Rivera relegated her comments on the show to simply putting forward the confession that she doesn't shower every single day, followed by her later remark about that strategy being approved by deurmatologists, it would have been all too easy for her to avoid this controversy. It could have been written off as an idiosyncrasy, a laughing, "Oh, wow, Naya, you're so quirky!" kind of moment.

But for her to take her personal habit and then weave a blanket over all "ethnics," joking that they don't shower as much as their white counterparts, knowing as a woman of color the near-constant struggle to overcome the negative attributes ascribed to minority races that form the basis of overt, internal, and covert racism even today — that's absolutely disappointing. It shows a kind of ignorance that invites ridicule from the very people she jokingly spoke for. And, worse, her response for them to get a sense of humor shows that she just plain doesn't care how she comes across to people. Which would be fine, of course, if she hadn't implied that minorities are dirtier than Caucasians and followed that up with, "And I don't care if you're mad I said it!"

All in all, this was not the proudest moment for Rivera, but it is one that she can learn from. Internalized racism of the joke aside, people seem more outraged that she tried to make her personal habits seem like less of a personal thing and more of a cultural pattern of behavior. If Rivera can simply stick to speaking only for herself rather than almost every other race under the sun, she can afford drumming up this kind of controversy over her "jokes" in the future. Maybe that's something she can ponder in the shower.