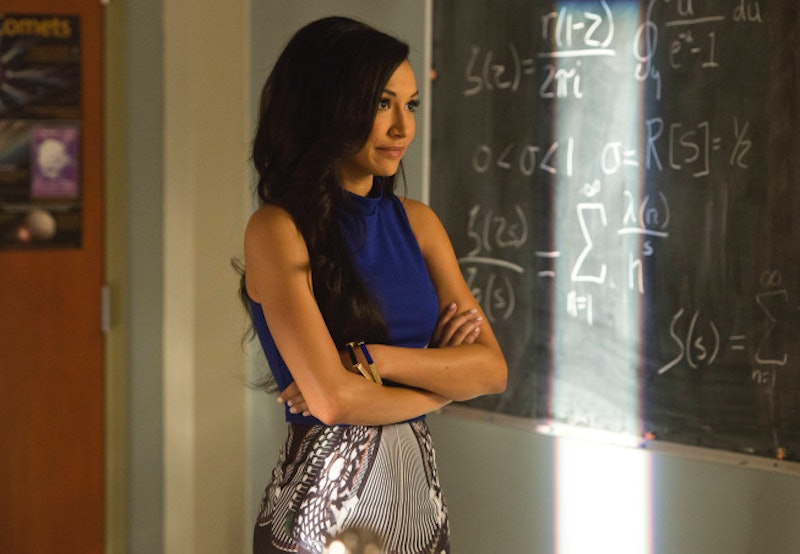 The rumor that Naya Rivera had been fired from Glee was cause of an immediate heart attack not just because Rivera is an amazing actress, but because Santana is one of the best characters on the show. Glee is the kind of show that makes watching it a labor of love. It's getting better, but there are still a lot of questionable decisions being made. The jury is still out on whether or not the time skip that will take place between seasons five and six is really for the best considering how many questions it's going to leave unanswered and how many storylines are going to get dropped.

To be fair, if Glee wanted to rename itself "The Santana Lopez Show" and just give me a half hour of Santana slinging caustic remarks and reacting to the thoughts and opinions of others with one of her numerous bitchfaces, then I wouldn't actually complain that much. Santana hasn't gotten anywhere near as much focus as she should have this season and, although Naya Rivera hasn't actually been fired, there's still some talk that she has been written out of the finale or that Rivera won't appear in season six at all.

A Glee world without Santana seems bleak at best and there are a lot of unresolved story lines and unsolved questions her disappearance would leave us with, time skip or no time skip.

Santana and Brittany just got back together in "New Directions"... and we haven't seen Brittany since. We know that Heather Morris is returning for the season five finale, but is that still going to hold through if Rivera has been written out of it? And even if, hopefully, Rivera's write-out is another sad rumor, are the writers going to take Brittana to a place that satisfies the fans? The answer to that is probably no, since it would take longer than one episode or one scene to satisfy my Brittana-lovin' heart after such a long break.

Santana has kind of been drifting ever since she graduated from McKinley. First she went to the University of Louisville on a full Cheerleading scholarship and then she dropped out. She's been involved in an extension program at NYADA for dancing, but we haven't seen much of that around her numerous part-time jobs. All her friends know what they want to do and, although signing a contract to sing a duet with Mercedes on her debut album may have given her some direction, there's only so long she can piggyback on Mercedes' dreams before she has to find some of her own. Right?

Dani was severely underused as a character, let's be honest. In fact, she was so underused as a character that we didn't even get to see Santana break up with her when she decided to get back together with Brittany. We always knew that Demi Lovato was only joining Glee for a set amount of episodes, but it would be great to get some proper closure on this relationship. At the very least, Dani is well within her rights to turn up with a Taylor Swift-esque song about evil exes

Glee isn't the kind of show that gives much focus to the families of characters unless directly relevant to something, but we've only seen two members of Santana's family and we've only seen each of them once. Maribel Lopez, her mother, appeared for the sole purpose of sending her off to New York and Alma Lopez, her grandmother, appeared for the sole purpose of being a bigot. What would Santana's mother think of her now? Will she ever reconcile with her grandmother? Can we get introduced to her father the doctor? Please?

Naya Rivera and Lea Michele's alleged feud is the whole reason these unpleasant rumors are swirling to begin with, but if there's one thing "The Back-Up Plan" displayed, it's that Rivera and Michele have great friendship chemistry. Santana and Rachel have always fought and probably will always fight, but Glee has just given us a taste of what can happen when Santana re-evaluates her friendships and steps up to be there for the people she cares about. We'd love to see more.